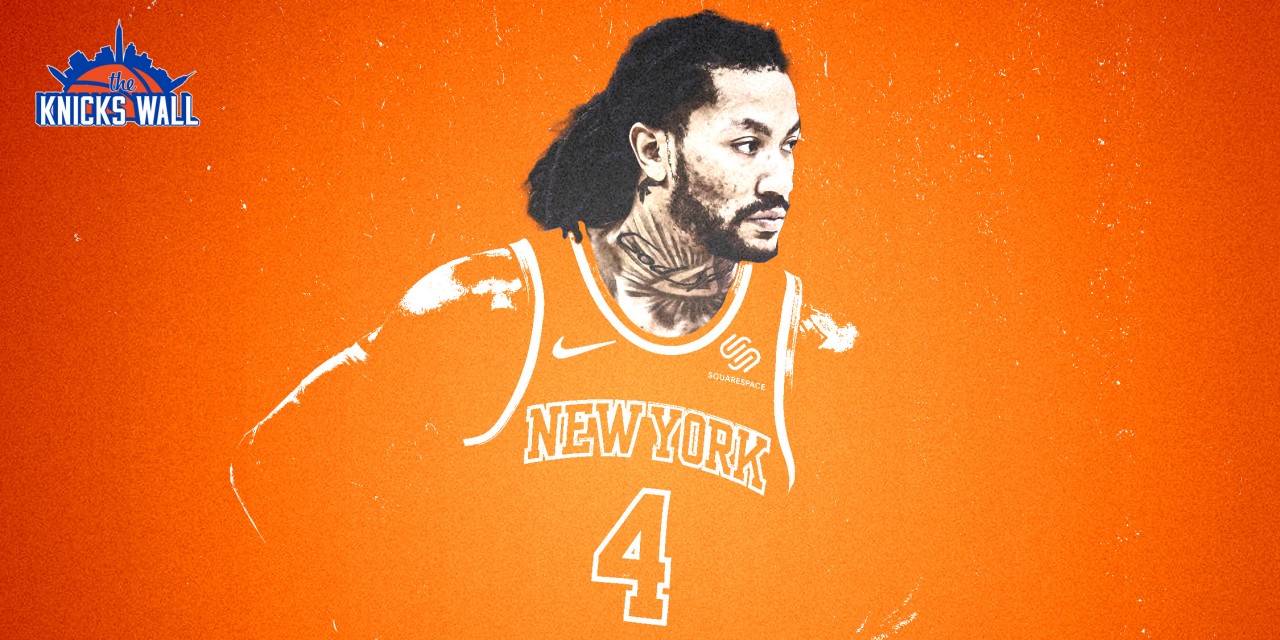 Derrick Rose has transformed himself as a veteran point guard orchestrating the Knicks offense during key moments of the successful second half of the season.

The New York Knicks are fresh off their winningest stretch of basketball in nearly a decade. They accumulated a nine-game winning streak—the most since 2013—that ended Monday against the Phoneix Suns thanks to a herculean effort from Chris Paul. At 35-28, the Knicks are in a position to land home-court advantage in the first round—a feat not accomplished by the orange and blue since the halcyon days of Carmelo Anthony.


This nine-game stint took place without Mitchell Robinson, one of the team’s core pieces and a defensive anchor on the interior. Several faces across the lineup stepped up at different points throughout the streak. However, one steady hand could be relied on to produce consistently over the past fortnight and change: Derrick Rose.

Not Julius Randle, nor R.J. Barrett, nor Immanuel Quickley, though all have had recent moments of brilliance. That’s not to say Rose is a better player than any of these names or is more critical to New York’s future success. It’s an example of Rose’s brilliance that his play over the last 10 games, if sustained for the remainder of the season, could thrust him into the Sixth Man of the Year conversation as a dark horse candidate.


New York boasts an outstanding 19-8 record with Rose in the lineup—that’s a 57-win pace. Let’s delve into the numbers to precisely determine how the former MVP impacts winning for the Knicks.

Rose is a rare breed of archaic point guard in terms of how he scores from the perimeter. Instead of following the crowd and adopting a three-point-heavy offensive mindset, Rose has gravitated towards the midrange as he’s aged. No longer the speedster and athletic freak of yesteryear, he’s made a concerted effort to hone his touch from the in-between area and is seeing the fruits of his labor. Rose is swishing his mid-range shots at a career-best efficiency—an exceptional 47% of them, which ranks in the elite 84th percentile among floor generals.


How about specifically from the extended mid-range area between 15 feet and the three-point arc? Rose is faring even better, shooting a torrid 54% percent, good for the 93rd percentile.

Rose’s efficiency on this type of shot is undoubtedly striking. But what’s more noteworthy is the frequency at which he’s attempting midrangers, and his ability to create his shot from this proximity consistently. Nearly one-half, or 49% of all of Rose’s field-goal attempts as a Knick, have come between the paint and three-point arc. Additionally, only 21% of his mid-range makes stem from an assist—Rose averages approximately 4.6 unassisted mid-range tries with the Knicks. With reserve shot-creator Alec Burks sidelined for most of New York’s winning streak, Rose has served as the de facto offensive initiator off the pine.


The Knicks possess few players capable of bailing out lifeless possessions with stellar isolation play. Rose is one of them.

Derrick Rose, at the price we paid, was a HEIST

some real thieving and achieving by Leon Rose pic.twitter.com/p5o6x3Owzw

It’s impossible to understate the value of having efficient self-creators like Rose in the playoffs, especially for such a young group. The level of defensive intensity inevitably ramps up come the postseason. Randle and Barrett could go through some growing pains since neither has experience as a top scoring option for a winning team. On the other hand, Rose has a wealth of postseason action under his belt and the outside shot to buoy the Knicks’ offense when it’s on life support.

A point guard quagmire has existed in New York since opening night—Rose, Immanuel Quickley, and Elfrid Payton have all been jockeying for position in the depth chart. Each has had turns at the starting helm and the end of the rotation. Payton and Quickley, while talented players in their own right, aren’t capable of generating open looks for their teammates like Rose. The former plays with palpable tunnel vision, and the latter is more of an off-ball threat.

Rose is the straw that stirs the Knicks’ reserves—he leads them in dimes per game with 4.2. Reggie Bullock’s recent shooting surge is partly thanks to Rose, who has manipulated opposing defenses with his driving chops and located Bullock for high-percentage looks. His mastery of the rudimentary, albeit effective drive-and-kick action adds a much-needed layer of lethality to New York’s perimeter offense.

The NBA.com metric, assist points created, is an accurate measurement of playmaking prowess. It determines how many of his teammates’ points a single player orchestrates. Rose’s average of 11 points in this category lies second on the Knicks behind only Julius Randle. This is no aberration—Rose is the second-best facilitator on the roster. The proof lies in the film of his recent dimes.

The play above is a prime example of how Rose’s playmaking sets him apart from his teammates. Rose eyes Quickley at the top of the key to fool the Raptors defense into thinking he’s the intended target. He then simultaneously rifles a pin-point bullet to Bullock on the weak-side corner, who buries the corner triple. This dime was LeBron-like in the strength and coordination needed to complete such a sequence. Even Randle, who has improved leaps and bounds as a passer, would be hard-pressed to pull off the assist above. He hasn’t seemed comfortable as a facilitator that far away from the rim and has been prone to making careless passes.

Next up is a drive-and-kick masterclass from Rose. The possession in question is ticking down as the Knicks have just seconds remaining on the shot clock. As a last-ditch attempt at points, Rose catches the rock at the top of the key and takes two quick steps to feign as if he’s driving. Three Raptors dart to the front of the rim to protect the paint, leaving Obi Toppin open in the corner. Rose, in mid-air, fakes a floater and finds Toppin, who cashes in on a corner three-ball, an area of his game he’s struggled in as a rookie.

New York’s nine-game tear wouldn’t have been feasible if not for Rose’s adeptness as both a drive-and-kick initiator and mid-range scorer. Both attributes have yielded efficient and effective team basketball that has put the Knicks’ abhorrent offense of the past in the rearview mirror. If New York wants a puncher’s chance at a deep playoff run, it is paramount that Rose continues to replicate his recent play. Considering the confidence Rose has exuded over the past few weeks, fans should be optimistic he will.

»READ: Should the Knicks pursue Dennis Schröder this offseason?