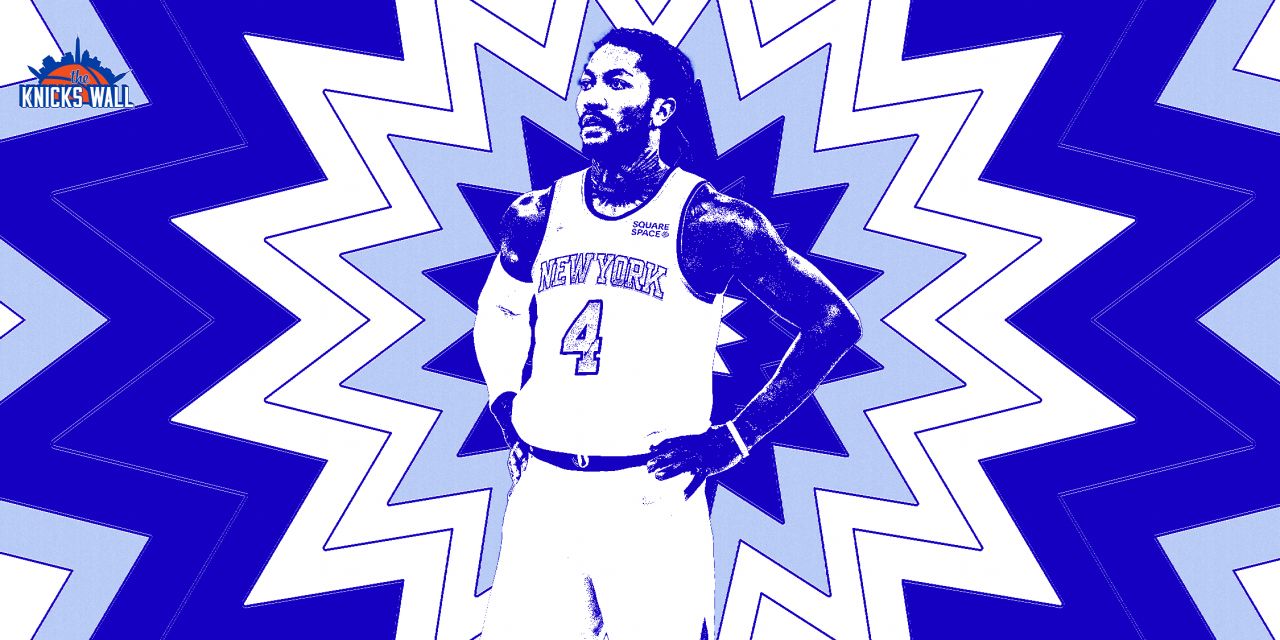 With Jalen Brunson and Immanuel Quickley the clear-cut point guards of the future, is Derrick Rose’s role with the ’22-’23 Knicks is up in the air?

The Donovan Mitchell summer saga finally came to an unfortunate end last week, if you’re a Knicks fan. The three-time all-star was dealt to the Cleveland Cavaliers ending the hopes of a homecoming for the Elmsford, New York native. One winner is Derrick Rose, who is still on the team, for now.

Missing out on top-tier talent like Mitchell really stings and there has been a lot of vitriol directed at ‘Bockers president Leon Rose. Not only did he fail to bring Spida to the Big Apple but also, apparently was willing to give up R.J. Barrett, Mitchell Robinson, Obi Toppin, and at least three unprotected first-round picks, per Adrian Wojnarowski, though he drew the line at Immanuel Quickley.

An obvious by-product of the Knicks failing to land Mitchell is the fact that all of the young players who were rumored to be traded are still in the fold. Namely Quickley; who looks to have a more significant role after the departures of veterans like Alec Burks and Kemba Walker. IQ looks to expand his point guard responsibilities by playing behind New York’s big free agent signing, Jalen Brunson, who inked a four-year, $104 million deal this offseason. The addition of Brunson could usher the most exciting and effective point guard duos the Knicks have had since Walt Frazier and Earl Monroe.

The Brunson-IQ combo is exciting because they both have the potential to turn the point guard position from a problem that’s plagued the franchise for decades into one of the stronger points of the team. Both are smart players who can shoot well, distribute, and truly operate as floor generals for a Knicks team that needs one badly in order to be a playoff contender this season.

After multiple surgeries season, this may leave Derrick Rose on the outside looking in, in terms of minutes at the point guard position. Rose has been a trooper in his second stint in the orange and blue. He led the team in scoring in their 2021 playoff run with 19.4 points per game. Rose has also been a solid mentor and has shot the ball well from behind the arc. Despite his contributions when he’s available, Rose is in the twilight of his career. Injuries continue to be a major factor and he doesn’t really fit in with New York’s timeline as far as player development. While he plays an important role, younger players like Quickley, who occupy the same space, should be prioritized for the long-term success of the team.

D-Rose has one year remaining on his deal and could very well be here this upcoming season. However, his services would be coveted elsewhere, particularly by a contending team looking to bolster the bench. Moving on from Rose makes sense, given the draft capital and money New York has invested to upgrade their point guard position. With the season rapidly approaching, it might not be feasible to deal Rose now given most teams are done with their offseason transactions. The grind of an NBA season takes a toll on players in many ways with injuries and rest days all coming into play. Derrick Rose could be a viable midseason trade chip, especially if Quickley and Deuce are playing well.

Backup point guard is one of the least discussed and most important positions in the NBA. With the league becoming increasingly guard-centric year-to-year, it is important to have the necessary depth to make it through the season and through the postseason successfully. Veterans are especially valuable in doses when the going gets tough and Derrick Rose he has proven to be able to step up, be a catalyst and hold down the fort when called upon. Rose’s days of putting up 20 plus points per game a season are in the rearview mirror, however in a short series, Rose is more than capable of providing enough offensively to keep a team afloat.

As Quentin mentioned back in May, the Los Angeles Clippers were a candidate for D-Rose’s services. Since then, the Clippers have since acquired John Wall to serve that veteran point guard role. Both are former all-stars derailed by injuries, but Wall has more left in the tank. Their crosstown rival, the Lakers could’ve made sense as well, but they recently added Patrick Beverly to the mix. At this point, I believe Russell Westbrook will somehow still be a Laker next season, so Rose wouldn’t really work there either.

A few teams that stand out in the East are the Phillidelphia 76ers, Chicago Bulls, and Miami Heat who are all equipped to either win it all or at least make a deep playoff run.

Philadelphia is loaded in the superstar department and has an up-and-coming star in Tyrese Maxey to run the point alongside Harden. What the Sixers are lacking is a true veteran point guard on their roster who can help out Maxey the way he did for Quickley and also help Harden when he is going through a rough offensive patch. In return, the Knicks could acquire a possible bench piece like Isaiah Joe and maybe a second-round pick.

A Chicago Bulls reunion would also be an awesome sight as well, as Rose is from the Windy City and had his best years as a member of the Bulls. Lonzo Ball is great but is often injured and the Bulls have too much talent to be exiting the postseason in the first round like they did last year. Ayo Dosunmu is too young and Coby White is too inconsistent to take over that role for a long period of time and Rose, in my opinion, would be rejuvenated to a degree back in a Chicago Bulls uniform and could help DeMar DeRozan, Zach LaVine, and company make a deeper playoff run.

Finally, the Miami Heat are another prime option for Derrick Rose as well if Kyle Lowry isn’t able to return for Miami this season. Rose could play a role similar as Lowry last season when the Heat came within one game of the NBA Finals. Derrick Rose, when healthy, could be as consistent a player as Lowry, if not more. He can also help former teammate Jimmy Butler bring great veteran leadership to a Miami team with young players like Bam Adebayo and Tyler Herro.

»Read: Checking In On The EuroBasket Knicks