Derrick Rose Is Having No Issue Meshing With These Knicks 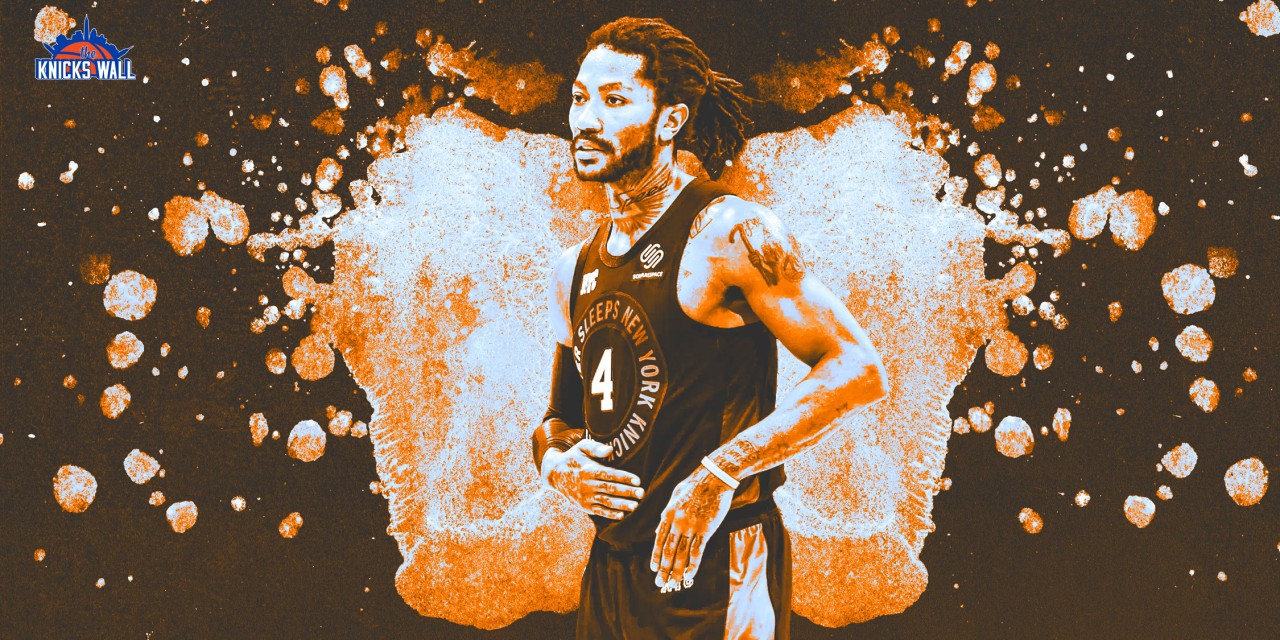 In his second go-around with the Knicks, Derrick Rose has turned into a distributor looking to feed his teammates, especially the rookies.

Just in time for Valentine’s Day, the lord and savior of the New York Knicks franchise, Leon Rose, decided to bring another Rose to New York

In the four games since the New York Knicks traded Dennis Smith Jr. and Charlotte’s 2021 second-round pick for Derrick Rose, he’s averaged 13.0 points and almost 4.0 assists a game. The numbers don’t scream at you, but his impact on the floor has been obvious to anyone who’s watched any of those four games, three of which the Knicks have won.

Reuniting with his multi-time former coach Tom Thibodeau, Rose immediately has brought a steady veteran presence to the Knicks. He’s comfortable with the way Thibs coaches, and he’s been working with assistant coach Andy Greer every day to get more comfortable with the Knicks’ playbook. You can already see Rose acting as a secondary player-coach type when he’s out there. He’s the one talking in huddles, he’ll gather guys to point things out during free throws, and he’s visibly looking to get others involved early in his tenure with New York. That willingness to distribute the ball, and look to get the ball to guys with some space or wherever there’s an advantage situation on the court is probably the biggest difference so far from his first tenure with the Knicks. He even said so himself.

"They're good bro, they're dogs"

The two feeds to Toppin above are awesome and never would have come from Austin Rivers. In Rose’s first stint with the Knicks, you know for a fact he’s trying an acrobatic layup instead of finding Randle here:

Derrick Rose is SHOWING OUT in transition. Draws the defense and finds Randle for the easy slam pic.twitter.com/JRaZxMfv0h

Rose’s trademark acrobatic layups are still falling though, and he’s added a new level of excitement to an already exciting Knicks team this season.

Derrick Rose with the spin and the acrobatic finish. What a nice possession by the Knicks point guard. That's after he called for the clear out against Trae Young and then finished on him.
Walt Frazier called it "gymnastics acrobatics." pic.twitter.com/UzduLIZOUA

Given how incredible the Knicks have been on the defensive end of the floor this year (unbelievably third in the NBA in Defensive Rating and first in opponent field-goal percentage), the main need for the Knicks right now is shooting. The starting lineup is inhabited by mostly non-shooters at the moment, but another need is just pure scoring. The team is second-to-last in the league in points per game, and even though Julius Randle has been a monster this year, there are moments the offense stagnates when he’s out of the game or not hitting. R.J. Barrett is prone to scoring droughts as well, so there will be stretches of some games where the Knicks go four minutes without a bucket, like the start of the third quarter in Atlanta.

Rose steps in to fill that role when the offense stagnates; he can be a spark plug to get it going again. During the Houston Rockets tilt, the Knicks were up, but the momentum was starting to shift back to the Rockets, and Rose checked in and immediately put pressure on the rim, getting fouled at the cup twice in 30 seconds, the second of which was an and-one to put the Knicks up 15 and completely shut down the Rockets’ momentum.

Another example is in the second quarter of the game against the Wizards, Rose came in and ignited the offense, with a bucket for himself and a nicely placed feed over the top to get Obi Toppin a dunk on back-to-back possessions:

Rose’s rim attacks have opened things up more for the second unit, and Immanuel Quickley as his backcourt partner has provided a nice balance. Quick can be a little passive sometimes on his drives, and though his shot fake opens up space, he pulls up for the floater a lot, which is a nice move, but usually comes earlier than defenses have a chance to react. When Rose puts his head down and takes it all the way to the rim, defenses start scrambling, and that opens up the chains of movement that lead to good shots.

So far the Quickley-Rose experiment has worked wonders as, before the Hawks game, per SNY’s Ian Begley, in the small 59-minute sample that Rose and Quick shared the floor, the Knicks were outscoring opponents by 42 points. In that same Begley article, he mentions that when Quick was asked about sharing the court with Rose, he said “For me, individually, it helps on offense and defense. […] On offense it’s somebody else who can make plays, help make the game easier for myself, to score, and make the game easier to facilitate.”

Keep in mind they are playing bench units, but hell, if the starting unit can tread water with Randle and Barrett playing bully-ball, the Knicks’ current rotation gives them a huge advantage when it’s time for the bench units to come in.

Ideally, the minutes would be staggered a little better so Elfrid Payton is on the floor less and so we can see 25-plus minutes a night for both Rose and Quickley. But that’s a nitpick because what Thibs has been doing with the guard rotation since Rose arrived has been working so far, as the Knicks are finally starting to string together wins.