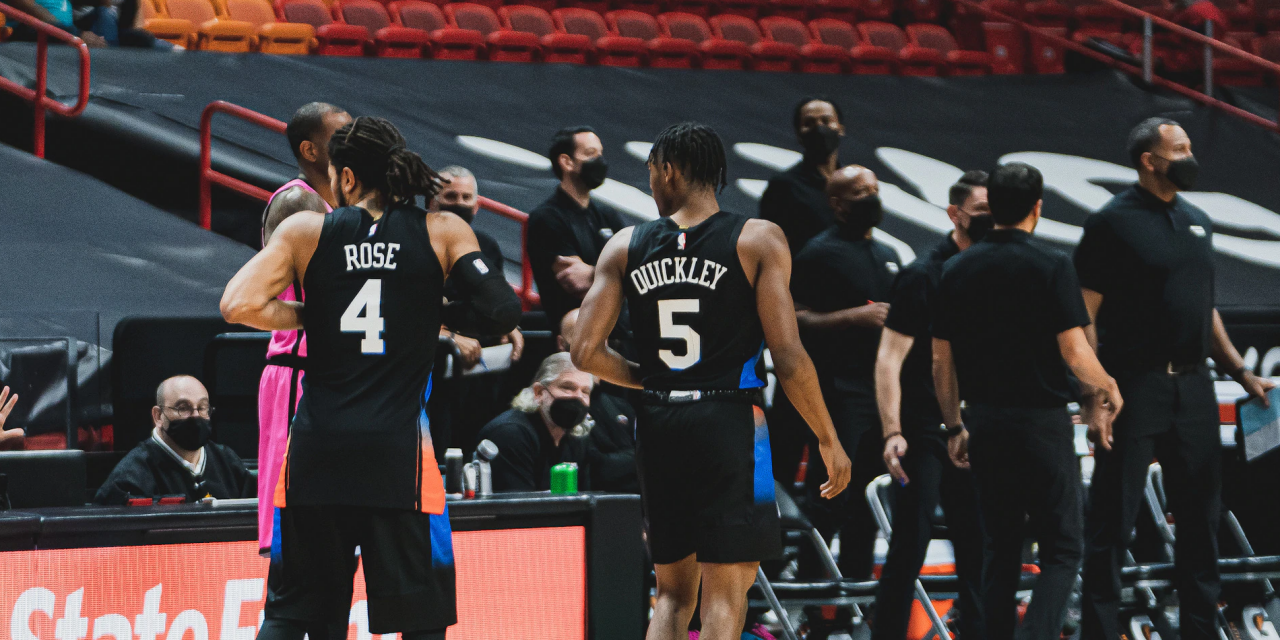 The Knicks dropped another game to the Heat, who had problems with New York’s new-look bench, led by latest acquisition Derrick Rose.

MIAMI, FLA. — The New York Knicks lost on Tuesday, 98-96, again to the Miami Heat but to no fault of the bench. In the second debut of Derrick Rose as a Knick, this time under reunited head coach Tom Thibodeau, the Knicks’ bench outscored the Heat’s second unit 42-18.

Rose saw his minutes, 20 in total, distributed mostly next to rookie guard Immanuel Quickley in the backcourt. Rose and Quickley sparked a first-half run alongside first-year forward Obi Toppin, veteran swingman Alec Burks, and backup center Nerlens Noel, helping the Knicks close an early gap to end the first quarter down two and keep the game in range for the starters.

“I think the bench played really well, that’s important,” Thibodeau explained after the game. “Nerlens gave us good minutes, Obi, Quick—that whole group played well together, Alec and Derrick … really got us going. We need everybody to play well, hard-fought game and we came up short at the end.”

Rose finished with 14 points, three assists, one steal, and two turnovers, shooting 5-of-9 from the field and converting on two of three triple attempts.

The Knicks lost, but Derrick Rose returned & provided a much-needed spark off the bench.

His new backcourt teammate, Quickley, finished with only seven points on nine shots, going 1-of-4 from deep. Quickley also dished three assists in the new world order for the 21-year-old Kentucky product. Rose was highly complimentary of the rookie after the game.

“[Quickley is] getting double teamed in his rookie year … for him to see that early, it’s just gonna make him better, the game is going to slow down. He listens. … With that, there’s always room for improvement.” Rose made sure to mention Quickley has a fighting spirit in him.

Thibodeau signaled a willingness to play two point guards and multiple ball-handlers with the second unit between Rose, Quickley, and even mentioning Burks. “It’s not often that we have multiple point guards out on the floor. It gives another ball-handler, and you can probably include Alec in that,” the first-year Knicks coach said. “All three are very efficient in pick-and-rolls.”

While the addition of Rose immediately called into question Quickley’s playing time, it was veteran combo guard Austin Rivers, whose father, Philadelphia 76ers coach Doc Rivers urged him to play for Thibodeau in New York, see his minutes diminish. He was a DNP-CD on Tuesday.

Thibs on a DNP-CD for Austin Rivers (his minutes essentially taken by Derrick Rose tonight):

"Austin has been around, he's a veteran. He'll stay ready, he'll be situational. Usually, things work out when he's called upon."

Rose, Quickley, and the Knicks’ second unit caught the Heat flat-footed at times, pushing the pace with the three-time All-Star point guard driving and kicking. It helped that—despite zero practice with the Knicks so far—Rose was able to find teammates, who in turn continued to dish off until the open man was discovered. Nerlens Noel, Obi Toppin, and Alec Burks were beneficiaries of the happy-go-lucky passing by the new Knicks backcourt.

Sunday and Tuesday were learning experiences for second-year swingman R.J. Barrett, who often had to guard or attack five-time All-Star Jimmy Butler, a former teammate of Rose in Chicago under Thibodeau. Butler put up two near triple-doubles between the pair of Knicks-Heat matchups, including a 26-point, 10-assist outing in tonight’s win for Miami.

Barrett was tough on himself after missing what would have been a game-tying look at the rim to send the game into overtime. “I had a really good look … [I] just gotta finish it.”

However, Barrett acknowledged the learning experience of matching up with Butler, who willed the Heat to the 2020 NBA Finals. Barrett, Jim from The Office style, stared down the barrel of the camera broadcasting the post-game Zoom with the media, saying of Butler, “He draws a lot of fouls. That’s something I can pick up from his game.

“Always making the right plays,” the former third-overall pick added of the renowned two-way player for the Heat.

Barrett made the right play when the time came in the final seconds of Tuesday’s game, although he and the team are not happy with the result. Playing Butler, nonetheless, will pay dividends for the sophomore out of Duke and the Knicks with their new look after this week’s trade.

Frank Ntilikina is quarantining after being potentially exposed to COVID-19. Under the NBA’s protocols, he is away from the team. Steve Popper of Newsday first reported that the fourth-year guard from France tested negative. Thibodeau confirmed this after today’s game, adding that only Ntilikina has been affected by contact tracing.

The Knicks, who have just alternated a pair of wins sandwiched with two pairs of losses, are in the nation’s capital on Friday to take on Bradley Beal and the Washington Wizards.