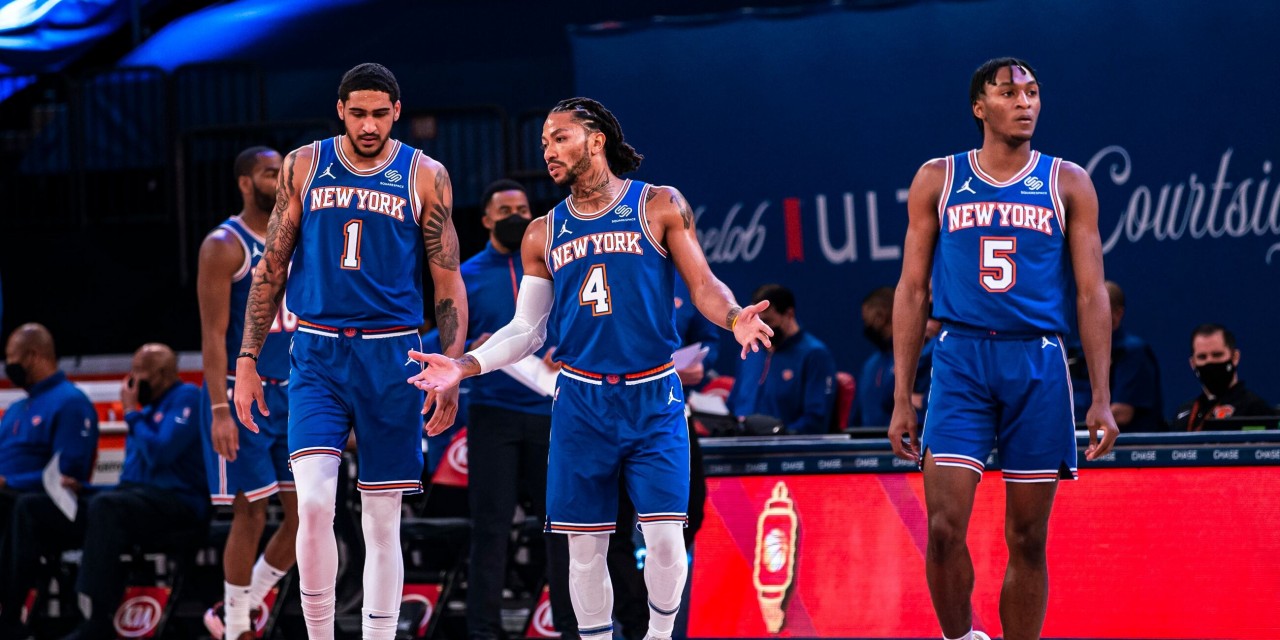 Derrick Rose and Obi Toppin spoke at length on Monday about the entertainment earned from getting out in transition for the Knicks.

Rose’s arrival has signaled a greater willingness by the Knicks’ second unit to push the pace, get out in transition, and distribute the ball among teammates, no matter their tenure in the NBA.

“The pace Derrick [Rose] plays at, I love that pace,” Toppin remarked after shootaround on gameday on Monday. “We played with that pace all year at Dayton, running up and down. When we get the ball out in transition, it’s hard to stop us. Every time we get the rebound we’re looking. We got the young legs.”

While true that the Knicks are not the fastest team in the Association (after Sunday’s slate of games, they’re still ranked last, per NBA Stats), the speed of play has noticeably picked up with the bench group out there, chiefly composed of Immanuel Quickley, Rose, Toppin, Alec Burks, and Nerlens Noel.

Toppin’s play caught Rose’s eye even before the first-year forward landed on his hometown Knicks by way of the eighth overall pick in the 2020 NBA Draft. “I’ve been a huge fan of his ever since he was in college,” Rose said on Monday prior to the Atlanta Hawks matchup.”He’s always in the right spot at the right time.” Rose also mentioned that he even needs to find more lobs and dunks for Toppin—who turns 23 in a few weeks—a young athlete with fresh legs and clear-cut athleticism.

Rose and Toppin both agreed that they fall in the category of needing to prove defenses they can hit an outside shot before opponents start to play them closer. “They’re gonna see if you can knock one down … then they have to run out there,” Rose added. “The game will come easy for him.”

Toppin is a candidate for more minutes and a greater role with the loss of Mitchell Robinson. The third-year Knicks center went down against the Washington Wizards with a right hand fracture (specifically injuring his fourth metacarpal). As a rookie, Toppin’s defense and rim protection is certainly spotty and unproven, but with backup center Nerlens Noel entering the starting role, Toppin may see different combinations in the second unit’s frontcourt—and more time to grow alongside the vet Rose.

Rose also emphasized again how he intends to help the Knicks rookies grow and not making it all about himself. “I’m trying to get guys involved. The game will tell me what to do. When I’m out there, they’re giving me shots,” Rose said. “It’s been building that trust with teammates, we got Quick (Immanuel Quickley) out there. Let him play his game, [I] play off-ball … if anything, I want him to be as impressive as possible.

The new-look Quickley-Rose second unit backcourt was impressive on Saturday against the Houston Rockets, completing back-to-back wins as the Knicks prepare to face Trae Young and the Hawks on Monday. Rose and Quickley combined to score 38 points in 21 minutes together, putting the hurt on Houston and its shorthanded team over the weekend.

The Hawks, one of the most lethal offenses in the league with Young in charge, will be a challenge for New York but also an opportunity for Toppin and Quickley to stretch their wings and push the pace next to Rose. If anything, it could give Toppin another chance to slam home more highlight dunks of which he was accustomed while in college.

Kevin Knox UP TOP and OBI TOPPIN THROWS IT DOWN 🔥🔥🔥🔥 pic.twitter.com/6m8gJgh76a

“I haven’t done it in a while,” Toppin reflected on a highlight dunk from the end of the Rockets win on Saturday, delivered via lob from third-year forward Kevin Knox. “Having that opportunity to get that lob from Kevin … Kevin threw a great pass, I had to do the rest.”

The Knicks’ winning ways are giving head coach Tom Thibodeau a chance to smile, as Derrick Rose noticed his time in New York with his three-time coach is the first time he has seen Thibs grin.

New York hosts Atlanta on Monday night; after Wednesday’s road game in Orlando, the Knicks will be home for five consecutive contests.