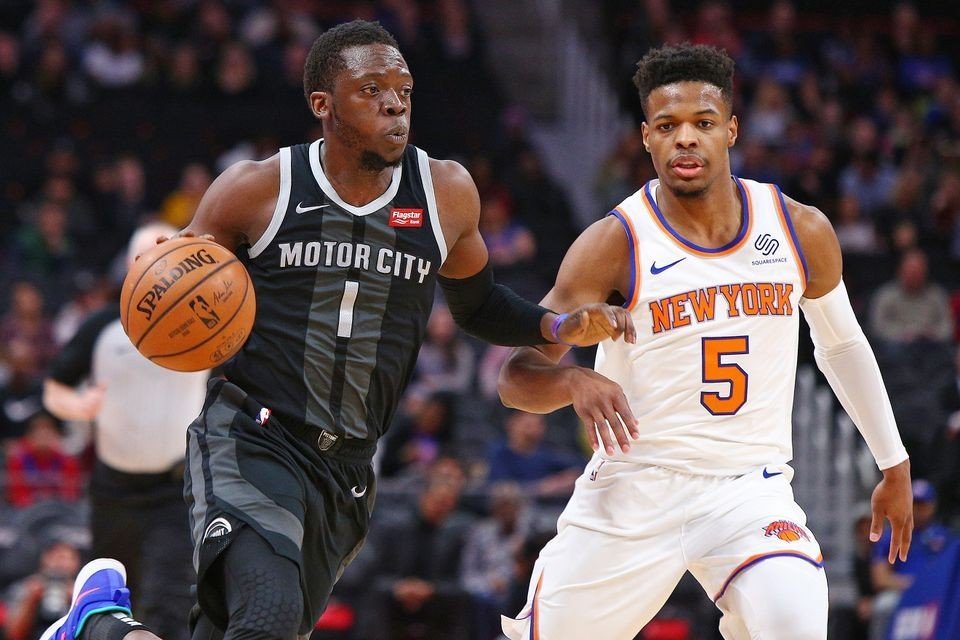 The Knicks’ struggles continued despite flashes of brilliance from members of New York’s young core, dropping another game against the Pistons.

In the midst of a career night, Dennis Smith Jr. worked his way to the free throw line for his 18th and 19th attempts of the game. He missed both shots, and after the Pistons’ subsequent timeout, Smith grabbed at his jersey in frustration.

Despite all of his brilliance in scoring from the field, hitting rollers for lobs, and jumping the passing lanes for breakaway slams, the most individually oriented facet of the game was Smith’s downfall, as his woes from the charity stripe coincided with a stalling of the Knicks’ offense in the fourth quarter of a 120-103 defeat.

Getting swept in this week’s home and home, New York now falls to 10-44 on the season, now having lost 23 of its last 24 games. This is also the Knicks’ 15th consecutive loss, creeping near its franchise-long losing streak of 20, which was attained during the end of the 1984–85 season and the beginning of the 1985–86 seasons.

Despite all the gloom, the Knicks competed well with Detroit (25-29) for the first three quarters of the game, despite having a putrid first quarter. New York shot only 23 percent from the field and 11 percent from three in the opening frame, as Detroit cruised to a 41-22 lead after one.

The Knicks were unable to contain Detroit’s top trio of Andre Drummond, Blake Griffin, and Reggie Jackson throughout the match, allowing at least 20 points to each Piston. However, strong play from Dennis and Mitchell Robinson helped fuel what was a strong comeback, until ultimately letting go of the rope in the fourth quarter. Let’s take a look at some of the key takeaways from tonight’s “win” in the race for Zion Williamson.

Despite struggling mightily from the free-throw line, DSJ’s play tonight is the main reason why New York was competitive for a majority of the contest. Scoring a career-high 31 points on 9-of-15 shooting from the field and 2-of-5 shooting from deep, Smith was the focal point of the Knicks’ offense.

Additionally, he chipped in eight assists while committing only four turnovers, showing great ball security despite dominating touches. While he did have several lapses against Jackson defensively, DSJ read the passing lane well a couple times, cruising for two breakaway dunks. His second dunk came in 360-fashion, giving Knicks fans a little preview of what they’ll see in the Dunk Contest.

In addition to his big night statistically, DSJ demonstrated some grit, earning a flagrant-one foul after knocking over Griffin when he was setting a screen. This type of intensity is greatly appreciated in what has mostly been a mundane season.

Robinson put together his second-consecutive solid performance against Detroit tonight, pouring in 11 points, six rebounds, and three blocks in just 15 minutes of action. Mitch’s play on both ends of the court helped New York come back from its 19-point deficit at the end of the first quarter. Catching lobs and swatting shots with his tentacle arms, Robinson’s energy helped keep the Knicks within striking distance. Check out this sequence in which Mitch denies two Pistons any hopes of getting off a jumper.

With Drummond finding openings along the baseline against both DeAndre Jordan and Robinson, the Knicks probably should have rolled with Mitch a little longer in the second half, as his energy offensively was contagious. Additionally, Mitch connected on 5-of-7 free throws tonight, which was a welcomed sight with his struggles from the line earlier this season.

Noah Vonleh started at the four tonight, but exited after just three minutes of underwhelming play and did not see the court for the remainder of the game. The reason for Vonleh’s early departure appears to be a benching.

Mario Hezonja stepped up and filled in admirably. While he only made three shots on 11 attempts from the field, Hezonja was about as good as you could ask of him playing power forward, grabbing seven boards, swiping two steals, and not being the source of the Knicks’ fourth-quarter dismay—outscoring the Pistons by one point in 27 minutes of play. While this doesn’t sound like much, it’s a mediocre performance among a series of horrid games from Super Mario, making this effort noteworthy.

Kevin Knox and Allonzo Trier both underwhelmed, shooting a combined 5-for-17 in defeat. They disappointed for different reasons. Knox is currently getting good opportunities to succeed sharing the court with Smith Jr. He’s having trouble picking his spots and getting consistent mechanics on his jumper. Ironically, Trier could benefit to see a little less time sharing the court with Dennis. A ball-dominant guard, Trier running the point could help him get back in rhythm (sorry, Kadeem Allen).

In the macro, this loss will be viewed as one of many in a very impressive (gross) tank job by the Knicks. Looking more closely, the brilliance and potential of DSJ and Mitchell Robinson certainly flashed despite the L, giving Knicks fans some reason to believe in their young core.