Despite His Age, for Kevin Knox the Struggle Is Real 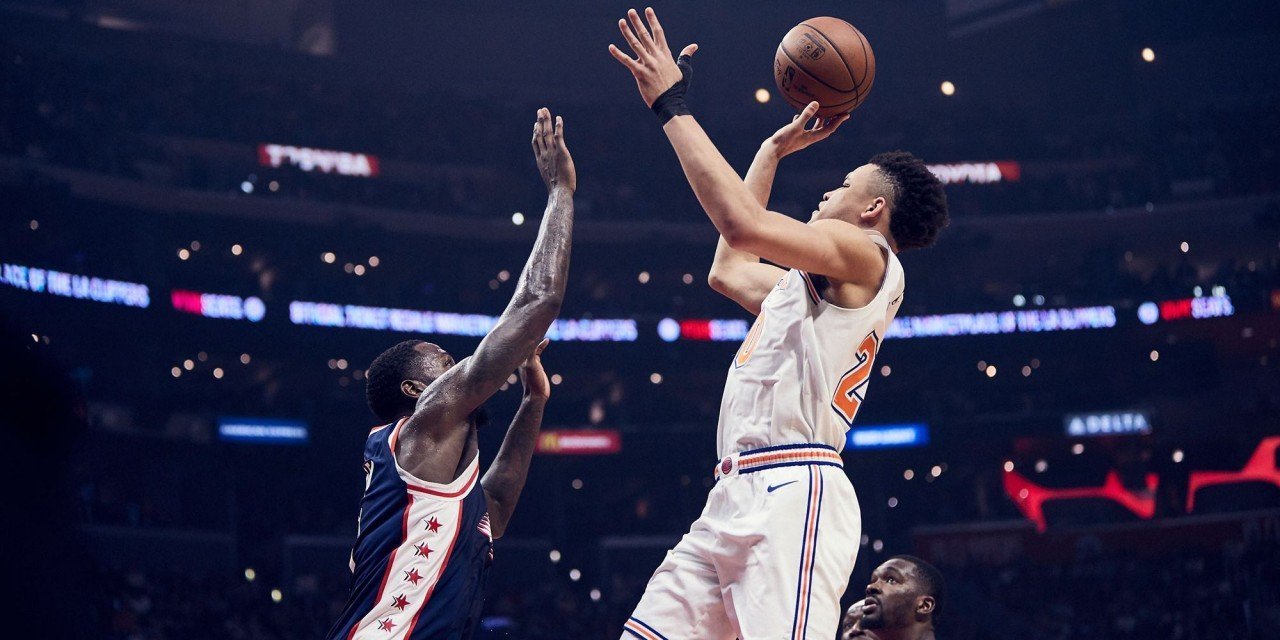 How can the Knicks rookie forward Kevin Knox pull it together in the final months of his freshman campaign?

In a recent story at the New York Post, Marc Berman highlighted Kevin Knox and his struggles. The story included Knox’s recent weak showing against the Sacramento Kings, his shooting woes, and an interesting tidbit from head coach David Fizdale about the persistence to start Knox.

Overall, it’s been a trying season for Knox—and one that would make the Knicks reconsider their selection over the likes of Mikal Bridges, Miles Bridges, and Shai Gilgeous-Alexander.

Even though Fizdale wants to keep Knox in the starting lineup, the Knicks should move him back to the bench. If the Knicks return to full strength at some point, the most intriguing lineup is Dennis Smith Jr., Allonzo Trier, Damyean Dotson, Noah Vonleh, and DeAndre Jordan.

It would also remove some of the pressures on Kev, at least defensively. Having Frank Ntilikina and Mitchell Robinson around you would cover Knox’s defensive weaknesses a bit, while also making him a central hub offensively for the second unit.

As far as Knox’s current struggles, my biggest question is: Where does Knox truly win as a professional basketball player right now? We’re only 1,600 minutes into his career, but there are serious negatives in Knox’s profile, enough to make you question his long-term future.

Right now, Knox is shooting 38 percent on two-pointers, touts 55 assists to 85 turnovers, and is one of the worst defenders in the league by any defensive metric. Currently, the Knicks are just under seven points better per 100 possessions defensively with Knox off the floor. He’s 19 years old, but the numbers suggest he can’t defend, isn’t a great passer, and can’t score inside the arc.

Where can Kevin Knox turn it around in his sophomore season? Athleticism and ball handling.

Improving as a creator, both for himself and others, is Knox’s biggest development point at the moment. It would unlock many different offensive avenues for him—namely scoring at the basket and out of the pick-and-roll. With a mediocre handle, Knox often takes a few dribbles before being forced to shoot or move the ball. Becoming even an average ball-handler would do wonders.

As far as athleticism, it’s Knox’s disposition on defense. He comes off a bit stiff, partly because he struggles to diagnose what action the opposing team is running, or loses his man while ball watching. His reaction time is also a beat off. Most young players, like Nuggets guard Jamal Murray, get training for this early in their careers, and Knox could be next.

It feels harsh to criticize Knox as a 19-year-old rookie, because this was largely a draft pick made to swing for upside. There is some upside to Knox, too—he shoots a good ball and, in an era of small-ball, clearly has the size to be an effective combo forward offensively. His ceiling is Rashard Lewis, who was pretty good and a solid contributor to winning ball.

However, the defensive issues are a red flag—enough to make you question whether he’d get to even a scratch defender, and his inability to create means Knox is largely just a shooter at this stage. Regardless of New York’s offseason plans, Knox needs to improve if he wants to have a long-term future with the Knicks.