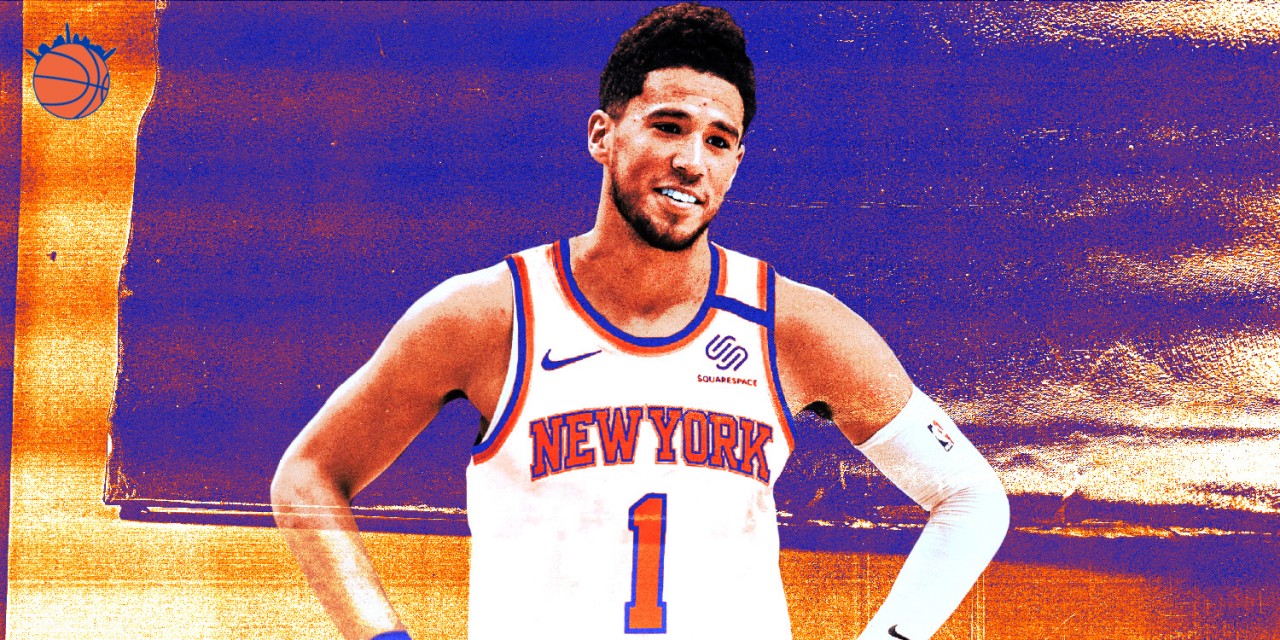 The connections are all laid out in front of us: the new Knicks front office, Leon Rose and William Wesley, are very close to Suns star Devin Booker. What does it take to trade for the volume scorer?

When William “World Wide Wes” Wesley was officially brought in as a senior advisor to new team president Leon Rose, my initial thought was: for what big move is the team preparing?

Wesley, like Magic Johnson, is someone so embedded within the hoops world that it is hard to imagine he would be able to abide by the league’s constrictive tampering guidelines. And similar to Johnson, who accomplished his chief goal of luring LeBron James to the Lakers before abruptly abandoning his post, Wesley could be a hired gun of sorts, whose sole mission is to bring a star to New York.

The main difference between Johnson’s quest to lure LeBron and the Knicks’ star search is that New York will likely have to turn to the trade market to accomplish their mission.


It is unlikely Anthony Davis leaves James and Los Angeles for New York, and Giannis Antetokounmpo will not give the Knicks any consideration if he hits the open market. Donovan Mitchell remains the best possibility, but even he will be under the control of the Utah Jazz until 2022, which would require the Knicks to trade for him à la Carmelo Anthony in 2011.

There is no certainty that the Jazz will even be open to trading Mitchell, no matter how turbulent his relationship with Rudy Gobert is. The Jazz can easily prioritize Mitchell as their centerpiece and ship out Gobert.

The Knicks can kick the tires on a Mitchell deal, but their energy would be better spent zoning in on a target that may be easier to acquire: Devin Booker. The word “easier” is doing some heavy lifting in that statement, but the sentiment rings true; there is enough of a connection to Booker and incompetence by the Phoenix Suns to engineer a deal.

Before advancing any further, it’s good to remember the cost of trading for a star player. For as much flack as the Knicks’ Carmelo Anthony trade received, the cost was on par with what the Lakers paid for Anthony Davis—and what most teams should pay for a star.

So, if the Knicks are hellbent on bringing a star to NYC, just know that it would come at the cost of R.J. Barrett, Mitchell Robinson, Frank Ntilikina, whoever the lottery pick is this season—and possibly all of them.


As it stands right now the Knicks do not have too many enticing pieces to facilitate such a trade. Because of that, Rose and Wesley will have to exhaust their resources and still need a bit of luck if any blockbuster is to be had.

The important thing to remember is that these trades are made with the intention of building around whatever star you land. In the Carmelo trade for example, the deal itself was not too much of an issue—the embarrassing roster management by the Knicks that followed, however, was (e.g. picking up Chauncey Billups’ option then amnestying him the next day instead of using that amnesty on Amar’e Stoudemire and compounding that mistake by adding Tyson Chandler to create a spacing nightmare in the frontcourt).

But much like Anthony in 2011, adding a player with nuclear scoring potential like Booker could help solve the team’s chief problem: scoring. The Knicks have lived near the bottom of the league in points per game, field goal percentage, three-point percentage, free throw percentage … you get the point. If it’s an offensive category, chances are the Knicks rank near the bottom. Booker’s presence would immediately change that.

Over the last three seasons he has proven to be a consistent 20-plus point scorer per night player. He torched the Boston Celtics, in their house, with the highest scoring performance since Kobe Bryant’s 81 by dropping 70 points.

Special scoring explosions aside, Booker has proven he’s got some serious game and is the type of player a team can easily build around. If he were to call New York home instead of Phoenix, he’d also be able to accomplish something the best of the best are able to do: recruit other stars to play with him.

In order to manifest this dream, Rose and Wesley will have to pull out all the stops. What makes Booker the best chance at a blockbuster deal are those connections with Rose and Wesley. A partial reason for Magic’s success in successfully luring LeBron was his close relationship. James valued Magic’s opinion and it was a meeting between the two that helped lock it down. Rose is viewed in similar regard by Booker, who was highly complimentary of his former agent when the Knicks made the hiring official.

Booker’s connection to Rose likely came about in part thanks to Wesley—although it’s hard not to love a guy who helped land you a $158 million contract. Wesley is a close friend of John Calipari, a frequent visitor of Rupp Arena, and a good starting point for solving how Rose snagged so many Kentucky alums.

Rose and Wesley’s initial moves suggest they are building a CAA shrine at MSG. Adding one of CAA’s elite clients could be the seminal moment the franchise has looked for post-‘Melo era.

Right now this move is nothing more than a hypothetical. According to some sources it is even laughable to consider. For now, that may be true. But luck can change quickly and the Suns are a team that have been able to let special talents flee to the New York area before, why can’t history repeat itself?

The prudent option may be waiting for Booker and the next wave of mega free agents, who should all hit the market around the same time, near 2024. But 2024 in NBA terms feels like 100 years from now. There is no guarantee Wesley is around or even Rose for that matter. And in Phoenix there is at least an argument for the Suns to get a deal done with some not-so-gentle nudging from their star guard.

Unlike Utah, where it would be foolish to choose Gobert over Mitchell, Phoenix could at least talk themselves into having DeAndre Ayton as their centerpiece. If they were to get Barrett, Ntilikina (who the team has inquired about in the past), plus other assets, it is a team they could sell to their fans. The key to both teams being able to have a dialogue is identifying what those other assets are.

Some lottery luck could transform a laughable thought into a serious possibility. A package of a top-three pick, Barrett, Ntilikina, and anyone else the Suns want is not outlandish. For argument’s sake, the Suns could use that pick on LaMelo Ball—suddenly the loss of Booker doesn’t look bad. There is also the added bonus that Robinson could stick around with Ayton already in Phoenix.

A duo of Booker and Robinson is the deluxe version of what the team is currently pitching as their foundation. And if the failed pursuit of Kevin Durant taught us anything, it’s that if you want one star you better budget for two.


And another thing the Knicks should have learned is that connections matter.

One common thread in their failed conquests to bring LeBron James and Kevin Durant to New York was there were no familiar faces to talk to. Rose and Wesley change that dynamic in theory; now let’s see how it looks in practice.