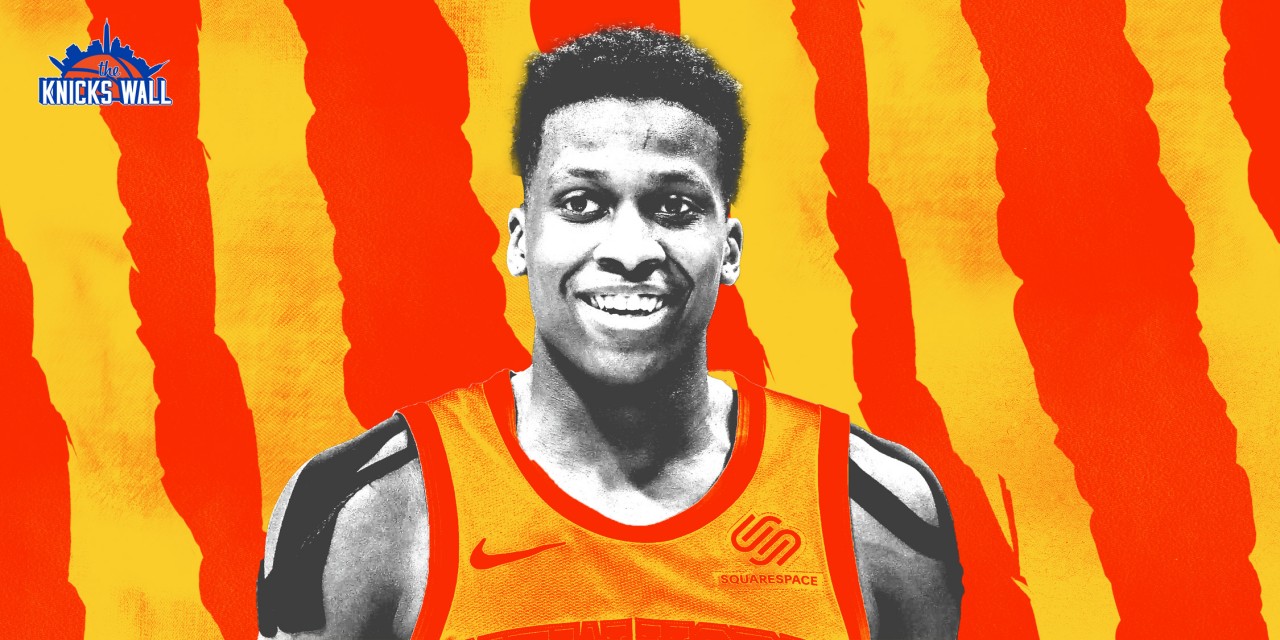 The Knicks have one of the best defenses in the NBA, but their premier perimeter defender sits on the bench. Frank Ntilikina may not ever resurface.

Since Frank Ntilikina was drafted eighth overall in 2017, it has been quite the struggle for the French point guard in the Big Apple. At the time Ntilikina was selected, he was viewed as a bit of a reach at eight and largely an unknown, given that he played overseas and wasn’t really seen by most NBA fans. The organization felt they were getting an athletic, long guard who could put the clamps down on anyone at any position. There were concerns about his offense, but the Knicks at the time believed he could develop into an offensive threat to complement his defensive prowess.

Fast forward to 2021 and Ntilikina’s offense still hasn’t developed into what the Knicks and their fans had hoped, as the 22-year-old has never eclipsed 6.3 points per game in a season, per ESPN Stats. Ntilikina by all accounts is a great teammate and still one of the Knicks’ most capable perimeter defenders, but his lack of potency offensively in an increasingly offensively driven league is alarming.

If you take a glimpse at the box score for this season, Frank Ntilikina’s three-point percentage jumps off of the page at 47.4% and, yes, he has had his moments this year with some timely threes. Ntilikina’s supporters will point to this as an improvement and a reason to give him more floor time, but the sample size is just too little to prove that the guard has made enough strides in that department to where he can crack the rotation.

Two guys come to mind when analyzing Frank Ntilikina. Dante Exum and Luguentz Dort. Both of these players have similar skill sets and had comparable concerns coming into the NBA, excellent defensive potential, but are they capable enough offensively to be able to have staying power? Exum and Dort’s career trajectories look to be heading in completely opposite directions at this point.

Luguentz Dort, coming out of high school in Montreal, was a five-star recruit who ultimately decided to attend Arizona State. In his lone season as a Sun Devil, Dort won Pac-12 Freshman of the Year and made the Pac-12 All-Defensive Team. The Canadian standout did struggle from three in college and his offense was a concern as he went through the draft process.

Dort ended up going undrafted and signed with the Oklahoma City Thunder. Although still inconsistent, Dort has had a couple of huge games from behind the arc, including Game 7 of last years playoffs against the Rockets, where he poured in 30 points on six threes out of seemingly nowhere, while simultaneously playing great defense on one of the best offensive talents ever in James Harden. Also, in just this past week, Dort scored 42 points against Utah on seven threes and had another game with 21 first-quarter points.

The 22-year-old Dort, despite coming into the NBA with questionable shooting prowess, has shown flashes of potential and offensive explosiveness that gives OKC promise that he will be a good two-way player. We haven’t seen anything close to this from Frank Ntilikina, whose career high is 20 points.

On the other hand, Dante Exum had tremendous promise after being selected fifth overall by the Jazz in the 2014 draft but has never been able to live up to the hype and has subsequently bounced around and is barely hanging on in the Association at 25 years of age. Like Ntilikina, Exum looks the part of an elite wing physically but has never been able to figure out offense as he never has averaged above 8.1 points per game. Seven years into the league, it seems the writing is on the wall for the Australian, who will likely never become serviceable enough offensively to be a big piece of a team.

At this point, Frank Ntilikina is very well heading toward Exum territory and it is unfortunate since the Knicks did use such a high pick on him, passing on Donovan Mitchell and Bam Adebayo, among others.

Of course, defense still matters a great deal, but there has been an increasing emphasis on being able to outscore teams through finesse and flash to win as opposed to winning games 90-87 the old-school, physical way many older NBA fans still romanticize. This shift in style of play has defensive specialists like Frank Ntilikina heading towards obsolescence, with their value no longer being what it used to be. In 2021, being able to shoot, or at least get the ball in the basket at a decent enough clip is what teams look for. If a team can score 115-plus points per night and be just competent in situational defense, they are likely set up for sustained success.

It’s also worth mentioning, the Knicks this season allow the fewest opponent points per game in the NBA at 104.3 and are third in Defensive Rating, per NBA Stats—and you can’t even point to Ntilikina being a major catalyst in their defensive renaissance because he barely plays. The guard has only appeared in 23 of the Knicks’ 59 games and hasn’t eclipsed five minutes played in each of the last six games he’s appeared, per Basketball-Reference.

Ntilikina just simply isn’t skilled or productive enough to get playing time over other guard counterparts Immanuel Quickley, Derrick Rose, or Reggie Bullock, especially given the fact that the Knicks have no room to experiment, being in the thick of a playoff race.