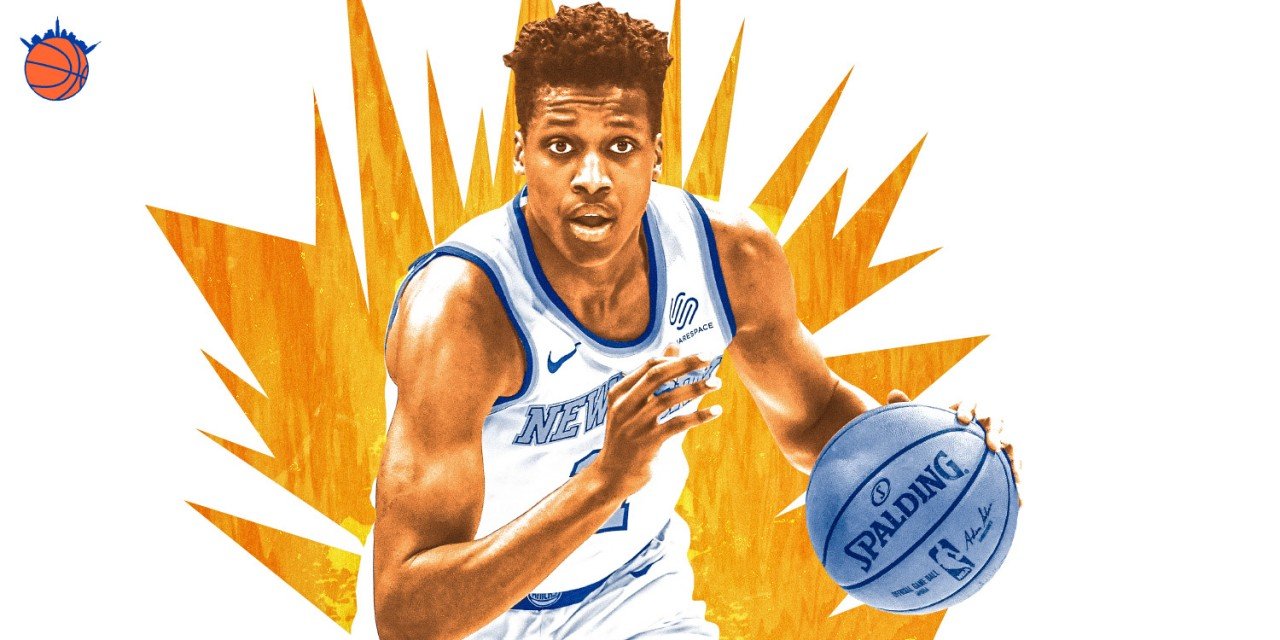 The Knicks are reportedly eager to deal their former lottery pick, but Ntilikina still has much more value within the organization than as a trade chip.

There seems to be a universe of indicting numbers and ugly statistics telling the story of Frank Ntilikina’s first two years in the NBA.

Yes, his shot is broken, almost historically so. He’s underperforming as a playmaker and ball-handler, and he’s missed a decent amount time—it’ll be 39 games this season due to a lingering groin injury. He’s a former eighth-overall pick, the last meaningful vestige of the Phil Jackson reign, and he hasn’t lived up to even modest expectations.

And yet, trading him away this offseason would be, to put it delicately, flagrantly dumb and very not good.

Let’s throw all the other numbers aside; what real use is there re-litigating two bad seasons on two all-time awful Knicks teams? When it comes to the French point guard’s value as an asset, there are only two numbers to fixate on: 21, his age next season, and $4.86 million, his cap hit for next season. No matter how dispiriting Ntilikina has played thus far, and no matter how impetuous the Knicks’ front office has become, those two numbers should overrule everything else in the file. Moving him based on a speculative free agency haul would be concerning; moving him at his lowest value would be sincerely frustrating.

Having debuted at 19, Ntilikina is still one of the greenest players in the league, younger than Deandre Ayton and Shai Gilgeous-Alexander. His defensive instincts have already translated; he even led the league in pick-and-roll defense last year, per Synergy Sports statistics. Those numbers slid back a bit in 2018–19, but his isolation stats are still enticing. He’s an irritant defending outside of 15 feet, and with some semblance of a defensive anchor (hello there, Money Makin’ Mitch), you can see him evolving into a reliable, switchable perimeter defender for New York.

Ntilikina’s 7-foot-1 wingspan would give the Knicks a foundation to work with as David Fizdale and co. focus on building a defensive identity. There are no other guards on the roster capable of taking on such responsibility, and any guards coming in free agency (Kyrie Irving, Kemba Walker, even Jimmy Butler) will need a lot of help implementing an imaginative defense up top.

Ntilikina’s fate projects a bit like Michael Kidd-Gilchrist’s, another top lottery pick with a sterling defensive reputation, a wince-inducing jump shot, and a murky injury history with a bad team.

But his career could just as likely resemble Marcus Smart’s. The Celtics guard chucked and confounded his way to sub-40% shooting campaigns his first four pro seasons but has nonetheless crawled his way into an invaluable role on a championship-contending core. Ntilikina will never command the ball, and he’ll be making his money on the defensive end, ostensibly with a chip on his shoulder. That’s a fantastic resource for a head coach who came up on Erik Spoelstra’s defensive philosophy in Miami, and orchestrated the league’s third-ranked D in Memphis just two seasons ago. You don’t get the Grizzlies’ perennial playoff status without leaning heavily on your version of Tony Allen, night in and night out.

Now, that second number. Ntilikina’s rookie contract pays out under $5 million next season and carries a team option for 2020–21. Every salaried player that isn’t occupying the sacred “two max slots” will become a part of a precarious, number-crunching tightrope act to field a decent group around the star talent. Ntilikina offers tremendous flexibility there.

If he puts it all the way together, he’s a rotation-caliber player under team control for two more seasons. If he even partially puts it together next fall, his contract makes him a desirable deadline acquisition. If he can’t put it together in the slightest, he still comes with no material risk and can be jettisoned next year. Trading for another draft pick, before all of this can reveal itself, would feel like kicking tires.

The Knicks have already sabotaged their asset quite a bit—from immediately firing the personnel that drafted him into the franchise, to ceding his developmental minutes to Emmanuel Mudiay and Trey Burke. Hanging on to Ntilikina and seeing how he pairs with New York’s next ball-dominant star—or just seeing how he pairs with the equally young Mitchell Robinson and a more auspicious system next season—is the course of action for properly revaluing their asset.

It’s hard to imagine a team giving up something substantial for Ntilikina, from now through draft night. It’s a bit easier to imagine getting something out of a 21-year-old with a steady defensive presence and no semblance of ego on the other end of the floor.

The Knicks can’t quit “Frankie Smokes” cold turkey. Not when the team is both expecting to compete next year and simultaneously devoid of quality players right now. He’s not too far removed from stifling LeBron James and riling up the Garden. There’s no need to save face on a bust, especially when we’re not sure if he’s a bust yet.

Patience, our beloved Knicks, patience. At least until we know what the roster looks like; at least until dude hits the legal drinking age?

»READ: Frank Ntilikina done for the season after re-aggravating groin

»READ: Parting with Ntilikina might be best for both parties