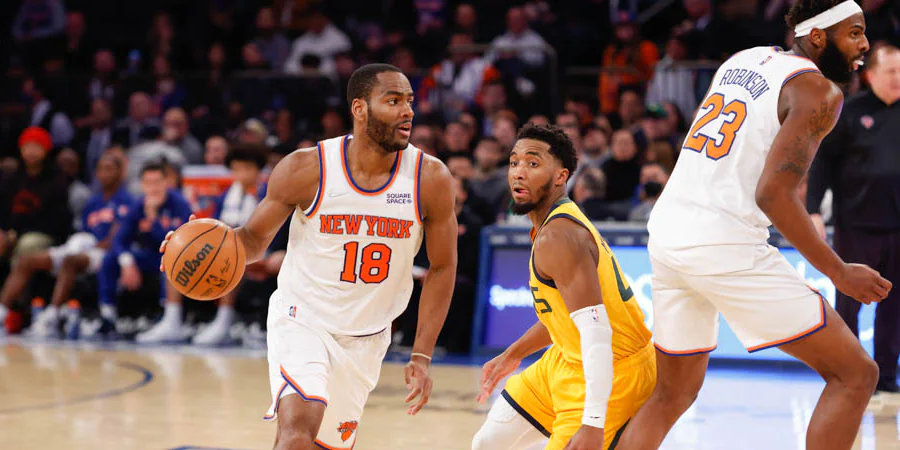 New York native Donovan Mitchell stomped all over the Knicks on Sunday at the Garden, scoring 36 points as the Jazz handed the Knicks their first loss on the homestand.

The New York Knicks (30-41) hurt their play-in tournament chances on Sunday night, losing to the Utah Jazz (45-26) by a score of 108-93 on a night that the Atlanta Hawks, the team ahead of them, also lost. After tonight’s game, the Knicks stand five games back of the Hawks for 10th place and that last play-in tournament spot.

The Jazz are one of the best teams in the league, but the Knicks were catching them on a night without a couple of their starters, Mike Conley and Bojan Bogdanovic. None of the Knicks injured prior to tonight’s game returned, but Quentin Grimes and Obi Toppin were playing their second and third games back from injuries, respectively.

The Knicks were explosive out the gate, making seven of their 11 attempted three-pointers in the first quarter. They were led by Evan Fournier, who had 11 points on three of the seven three-pointers. RJ Barrett and Alec Burks contributed seven points apiece as well. The Knicks actually led the Jazz 31-26 after the first frame and led by as many as nine in the quarter. This was thanks to incredible shot accuracy and neutralizing the Jazz players on offense not named Donovan Mitchell.

Things quickly turned around in the second quarter, as Jordan Clarkson began to really torch the Knicks coming off the bench. He scored 13 points in the quarter and closed the half with 18 points. Mitchell ended the half with 18 points, too. The Jazz were the ones with the hot hand from three in that quarter, making five of their 10 attempts beyond the arc. Rudy Gibert, while quiet with only two points in the half, held the Knicks out of the paint and recorded two blocks.

Julius Randle’s struggles continued to mount, as he had just seven points on 3-for-10 shooting from the field. Barrett led the team with 15 points at the half and Fournier became cold in the second quarter without a single shot attempt. The team also only had six bench points while, like aforementioned, Clarkson had 18 points of his own. The Jazz led the Knicks 60-53 at halftime.

The Knicks continued to unravel in the third quarter as the Jazz gradually extended their lead throughout the frame. Gobert got more of a hold on the contest, raising his point total to 10 and swatting another shot. Hassan Whiteside also held the team down in the paint, recording two blocks and a steal in the quarter. Some other Jazz players got involved on the offense, including Rudy Gay and Royce O’Neale, who had 10 and 12 points by the end of the quarter, respectively.

The Knicks shot a combined 24% for the quarter only tallying 20 points. Fournier struggled with fouls, being pulled in the quarter after recording his fourth personal. Immanuel Quickley at least lit a fire under the collective behind of the bench unit, scoring six points in the frame. The Knicks ended the quarter down 12 points at 85-73.

To begin the fourth, the Knicks tried their best to mount a comeback. A couple of three-pointers from Barrett and Obi Toppin, to go with several Quickley three-pointers and free throws later, the Knicks found themselves trailing by just four with as few as five minutes left in the game. Things only went back in the Jazz’s favor once Tom Thibodeau brought Fournier and Randle back into the game for Toppin and Quickley. It was certainly a head-scratching decision, especially once the Jazz went on a 12-0 run following the substitution. Mitchell closed out the quarter with 13 points as the Jazz ended up beating the Knicks by 15.

Mitchell and Clarkson led the Jazz in scoring on the night, putting up 36 and 23 points, respectively. Mitchell also had eight rebounds and six assists. Gobert ended with 14 points to go with eight rebounds and four blocks. The Jazz as a whole shot 45.9% from the field and pulled down 56 rebounds, eight more than the Knicks.

For the Knicks, Barrett continued his stellar play following the All-Star break. He put up 24, going 4-for-8 on his three-pointers to go with seven rebounds and three assists. Randle had another rough night from the field with 13 points on 6-of-22 shooting. Fournier finished with 17 points on five three-pointers before fouling out with two minutes left in the game, and Quickley led all players off the bench with 16 points and eight made free throws.

Mitchell Robinson, the soon-to-be unrestricted free agent, was held largely in check by Gobert and Whiteside on the night. He had just four points and three rebounds to go along with one block. The team as a whole shot just 37.3% from the field.

Fournier continues to eke closer to John Starks’ franchise record for three-pointers made in a single season, ending the night just six makes from tying the Knicks legend. He’ll have a chance to get closer when the Knicks play the Atlanta Hawks at home on Wednesday.