After a Nice Start, Dougie McBuckets Could Be a Part of the Knicks’ Future If the Price Is Right 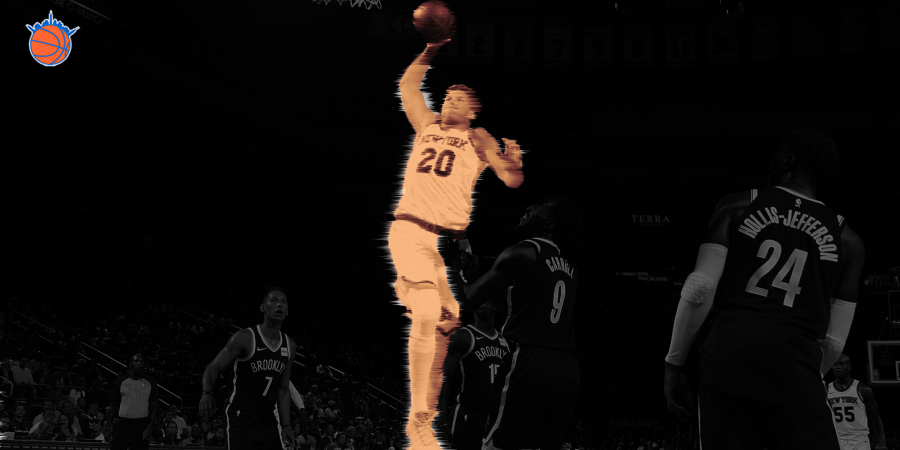 Doug McDermott has subtly provided the Knicks with some great, energetic minutes off the bench. What has he done well for New York, and how much will the Knicks be willing to spend to keep him beyond one year in the Big Apple?

Before the Knicks’ recent 107-85 blowout of the Clippers, the pregame broadcast aired a clip of coach Jeff Hornacek discussing the improvements his team’s offense has made this year:

“More ball movement, more body movement,” Hornacek told the press. “There’s some guys that are really good at cutting off the ball [on this team]. We’re not standing around as much, having one guy go at it.”

Weird, unnecessary parting shot at Carmelo Anthony? You could interpret it that way. I took it more as Hornacek trying to give a little shine to everyone not from Latvia: Courtney Lee, as slippery as ever coming off of curl screens; Tim Hardaway Jr., who’s basically kidnapping people from Waiters Island; and Douglas Richard McBuckets, who is shockingly the Knicks’ best 3-and-D wing! (I don’t consider the Lee, the Knicks’ best 3-and-D player, a wing even though he does log a ton of minutes at small forward).

Let’s not overreact here. Good basketball has eluded New York for so long that when the Garden hosts even slightly-above-average basketball, a more accurate assessment of this team after they’ve cooled off from a red-hot start, we tend to fall in love with fringe players that don’t actually have that much impact. It’s the “beer goggles effect.” We’re all so drunk on Kristaps and Ntilikina that $12 million a year doesn’t seem like that much of an overpay for a guy like Doug McDermott, averaging just 8.4 points and 2.8 rebounds in 23 minutes a game.

But wait… is $12 million a year too much for Doug McDermott? Let’s look at what he brings to the team, and decide if he’s worth blocking out serious cap space for.

Despite the “McBuckets” moniker, it’s on the other end where the NCAA legend has improved the most.

He was basically unplayable in the playoffs for the Bulls and the Thunder, his first two stops prior to New York. Those teams were begging for the spacing he provides (although he wasn’t as consistent a shooter as his reputation suggests, a sub-40 percent shooter from three before this season), but he was constantly buried on the bench. Why? Simple. He was a trainwreck on defense, prone to lunging off balance at awkward angles and lead-footed when moving laterally.

He’s still slow as hell going side-to-side, resorting to weird bunny hops to keep up with his man on the ball. But McDermott has become hyper-attentive off the ball—a roaming, switching maniac that doesn’t tire easily. This clip more or less sums up everything you need to know about McDermott as a defender:

The defensive downsides haven’t changed. McDermott prematurely leaps out in front of the Clips’ screener, Willie Reed, leaving the Knicks vulnerable to a quick slip by the roll man. This also allows McDermott’s man, Sindarius Thornwell, to get by him. When defending the league’s playmaking wings that can punish McDermott in ways Thornwell can’t, McDermott remains a massive liability.

But his burgeoning weak side I.Q. is starting to outweigh his physical limitations. He’s always been a hard worker on D, and that hasn’t changed (he hustles to recover on Thornwell after getting beat off the dribble). But McDermott has become super aware of back cuts, darting his eyes all over the floor to track his man or, if need be, to rotate to the open shooter. See how at the end of the clip above he makes up his mind in the blink of an eye to leave Jawun Evans, now 2-for-9 from deep to start his NBA career, somewhat open from beyond the arc? Evans makes the shot, but I’d say that’s a sound decision, especially with Lee rotating off of Lou Williams, the far more dangerous target, whom McDermott scurries for as Evans heaves up a miracle.

McDermott will likely always be a matador when his man has the ball. But he’s become a plus team defender in almost every other situation because of his frantic vision. He’s like if you sped up one of those sonar things in submarines, always keeping his head on a swivel to keep track of the moving pieces around him.

McDermott’s off-the-dribble game is super basic. He’s decisive at attacking closeouts, a vital counter for when teams overplay his catch-and-shoot threat, and… that’s about it. Just like on defense, everything McDermott does well as a scorer is away from the ball.

He’s a crafty cutter, often using the slightest of feints to get just enough space to wedge his 6’8″ frame between the hoop and his man:

Watch how he gets the jump on Treveon Graham here, almost like a halfback would run a counter in football. McDermott takes a tiny jab out towards the three-point line, which is enough to get Graham to overcommit before McDermott burns him for the easy basket.

He does it again here, but straight-up yams it home instead of laying it in:

(Side note: Is McDermott a top-5 sneaky-good dunker?)

Where he really shines, though, is with the most obvious facets of his game: shooting and off-ball movement. McDermott is torching dudes from three this year, shooting a probably unsustainable 44.9 percent from deep on 3.06 attempts per game (via Basketball-Reference). He’s got a lightning-fast trigger and loves to shoot off a “hop-step” instead of a “one-two step,” key for a quick release. Lose him for a split second and it’s over.

He’ll cool off, but the Knicks have been surprisingly creative at getting McDermott open with some Korver-esque off-ball action. Kudos to Hornacek for finding a few sets that work.

What the Knicks really want to know moving forward with McDermott is how he fits in with Porzingis. Early results are awkward but promising. The spacing those two generate is crucial for the Knicks’ offense, but they haven’t figured out how to compensate for McDermott’s lack of playmaking off the dribble:

So how much is he worth?

McDermott is a better NBA player than he’s ever been before. That much is certain. If he’s on a championship-caliber team, he’d be best utilized as the guy that does everything in the shadows while the ball-dominant stars, uh, dominate the ball. McDermott thrives when teams forget about him, which sounds like a backhanded compliment, but I don’t mean it to be. He’s been pretty useful in his 20 minutes a game this year.

As soon as he’s asked to do more of the typical NBA star stuff—get a one-on-one stop against the other team’s best scorer, do anything but straight-line drive off the dribble—he falters. McDermott’s just not built for the spotlight at this level.

But at age 25 he’s young, skilled, and knows exactly who he is on both ends. That last part is so important. He’s getting better too, not just at sharpening the things he already did well before (shooting, cutting, help D, etc.) but also adding things like this pass from the elbow, reminiscent of Minnesota Kevin Love.

He’ll definitely never be that good (Kevin Love’s not even that good anymore), but McDermott is adding things to his game and that’s going to give him leverage in free agency.

If (and this is a big “if”) he keeps this rate of production up, McDermott is probably worth around $8 million a year this summer, but he’ll get more than that. Teams know the financial situation the Knicks are in: no one is taking Joakim Noah’s contract (lol); both Enes Kanter and Courtney Lee are cashing big checks; and Hardaway Jr. got all the money ever last summer.

Here’s what I think will happen.

McDermott will reject the $4.5 million qualifying offer he’s owed (as he should), becoming a Restricted Free Agent. The Knicks will float out a sub-$10 mil number, which McDermott will reject (as he should). Another team with a ton of cap room will swoop in to test the waters with something like $12 mil a year, and the Knicks will either bite the bullet or let him walk to clear out more room for Porzingis.

Given what I’ve seen from him this year, and how malleable lineups with him have been, I think they should pay the man.