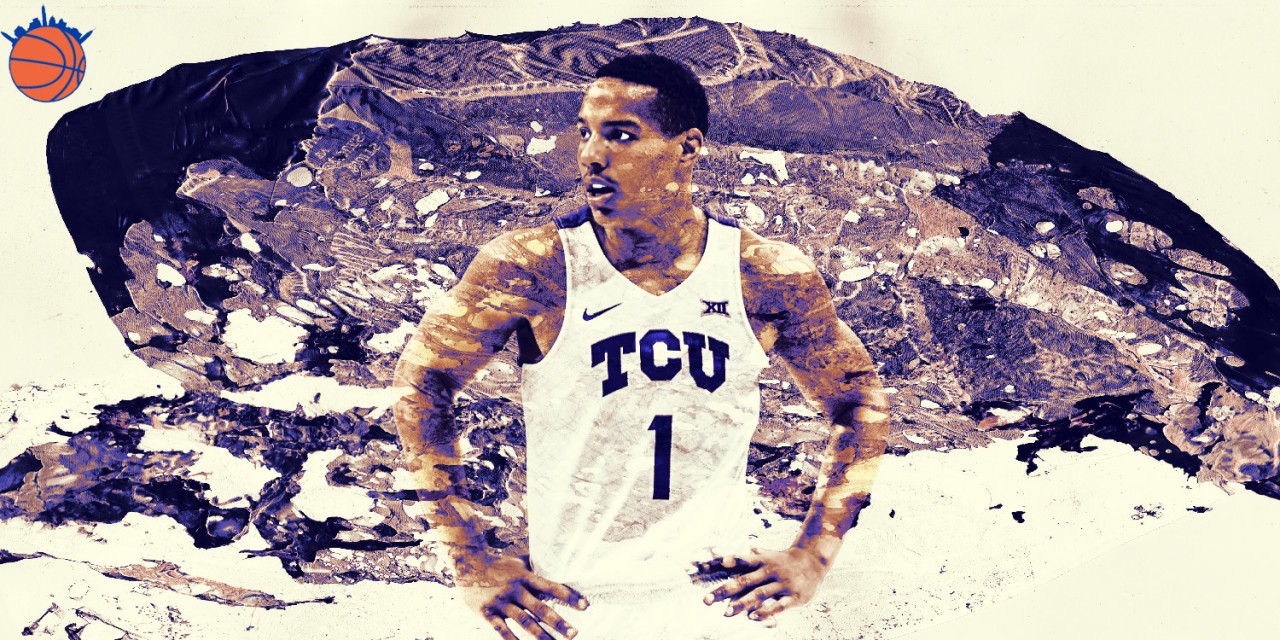 One avenue the Knicks could explore is taking a wing or two with their top draft picks in order to load up on shooting and spacing. Desmond Bane and Devin Vassell fit that bill.

The conversation around the New York Knicks and the 2020 NBA Draft heavily involves the point guard position. It makes sense, the point guard position has been largely one of unrest since the days of Walt Frazier in the 1970’s. Even when the Knicks found decent point guards (Rod Strickland, Mark Jackson, Derek Harper, and Chauncey Billups) the run was short-lived. So, it makes sense that the Knicks would be interested in a point guard in a draft class full of lead guards at the top of the class.

But is there an alternative? One thing the Knicks should consider is not only selecting one 3-and-D wing player but two, to attempt to solidify the position for the foreseeable future. Two players that stand out are Florida State shooting guard Devin Vassell and TCU forward Desmond Bane.

With just two young players for the future (R.J. Barrett and Mitchell Robinson), the Knicks shouldn’t be looking at fit in the draft, but rather, the best talent for fit available. Robinson gives the Knicks a starting center, allowing them to avoid the likes of Memphis’ James Wiseman, while Barrett’s presence as a top-three draft pick means the Knicks have one of the wing positions locked in for at least the next three season, so it makes that point guard position a glaring hole.

Part of this is due to New York’s lackluster drafting over the last few seasons, most importantly, Kevin Knox. While Frank Ntilikina has emerged to offer high-level defense and modest creation, Knox has struggled in his first two seasons, failing to make any significant improvements and continues to rank among one of the worst players in the league. Getting a creative point guard may help Knox’s future, he’s someone who has to play above his occasional flashes to have a chance to get to his second contract.

Despite the glaring need for a point guard on the roster, one of the biggest needs in the NBA is a good “3-and-D” wing player. Every team in the NBA could use another 3-and-D wing who can come in and space the floor and defend various players on the perimeter. Therefore, when you find one with considerable upside, they must always be considered as a potential option and the Knicks are no different.

Of this double down strategy, the two players that make the most sense are Devin Vassell and Desmond Bane. Vassell will most likely be available if the Knicks don’t move up from the sixth overall position during the lottery, while Bane should be available with the Los Angeles Clippers’ first-round pick, projected between 24 and 28.

Vassell is a 6-foot-7 sophomore guard who blossomed in his second season at Florida State, averaging 12.7 points, 5.1 rebounds, and 1.0 assists. What makes him a lottery pick is his ability to affect both sides of the floor. Offensively, Vassell was elite at the rim and from beyond the arc, finishing 69.4% at the rim and 41.2% from three-point range. Combine that with 3.1 stocks (steals plus blocks) and you have a pretty high-level wing prospect at 19 years old.

As for Bane, he enters this draft a bit less unheralded. Bane put together a solid four-year career at TCU, cumulating with a solid senior season and a 3-and-D starter kit ready for the league. In his final season in college, Bane averaged 16.6 points, 6.3 rebounds, and 3.9 assists. The numbers of intrigue: 6.5 three-point attempts per game and 44.2% three-point shooting. Not the biggest wing at 6-foot-5 and already 22 years old, there are concerns, but Bane has the numbers of a solid option after the first 20 picks.

It’s fair to assume both players will be in the top three players available when the Knicks are on the board.

One question that must be asked is how do the Knicks compare Vassell to the other non-elite point guard prospects. Based on most big boards, those elite point-guard prospects include Killian Hayes and LaMelo Ball. While Ball is set to be selected within the top three picks, the same can’t be said for Hayes, which will make for an interesting debate within the New York front office.

However, how does Vassell compare against the next group of point guards? North Carolina’s Cole Anthony was seen as a potential top-five pick walking onto campus, but injuries, lack of spacing, and the worst UNC team in a decade changed his trajectory. Iowa State’s Tyrese Haliburton is a great shooter and mover of the ball, but lack of attacking the rim will bring questions to is he a true starting point guard, or a quality second ball-handler in the Frank Ntilikina spectrum? Kentucky’s Tyrese Maxey and Australia’s R.J. Hampton are more ball-handlers over point guards who can handle the responsibilities of operating and leading the offense.

The Knicks have made questionable decisions in recent drafts. Ntilikina as a pick to placate Phil Jackson’s offense over Dennis Smith Jr. as a pick-and-roll guard with then-Knick Kristaps Porzingis; Kevin Knox as a “high upside” forward, with Michael Porter Jr., Miles Bridges, and Mikal Bridges on the board, are two examples—and this could ultimately fall in that category. While the non-elite point guard prospects all have upside, they also all have notable flaws.

Which begs the question: do you take the point guard who has flaws and roll on the upside or the 3-and-D wing who may not be a star but could be a strong contributor for a decade?

The Vassell/Bane idea vs. free agency and the 2021 draft

When taking two swings at 3-and-D wings, the Knicks would largely avoid the top of the point guard class. That doesn’t mean New York couldn’t address the position, as both the 2020 free agency period and 2021 draft offer potential options.

Filling the point guard position starts with trading for Oklahoma City guard Chris Paul. At 35 years old, Paul doesn’t fit the timeline for New York, but what he does offer is an elite creator, a good defender, and more importantly, a leader at the point guard position. In New York bypassing the 2020 point guard class, trading for Paul makes the most sense to hold over the position and it seems as if the Knicks are interested.

Stepping down from Paul would be Toronto’s Fred VanVleet. VanVleet is an excellent all-around guard, who can hold the point guard spot for the 2020–21 season and then play alongside one the following year. Memphis’ Tyus Jones and Milwaukee’s Eric Bledsoe make sense as trade targets, while the likes of Goran Dragic, D.J. Augustin, and Yogi Ferrell all seem like decent stopgaps.

The 2021 draft class offers another area where New York can salvage the position down the road. With two first-round picks, New York could entertain selecting one early with their pick, later with the Dallas pick, or even attempt to trade up if someone entices them.

North Carolina’s Caleb Love and G League’s Daishen Nix are both top-level prospects looking to turn one season into a top 10 selection. The crown jewel of the point guard class next year is Cade Cunningham, a 6-foot-7 point guard who will attend Oklahoma State this upcoming NCAA season. He can do it all offensively, fill multiple roles defensively, and more importantly, run and operate an offense. Cunningham is a one of the candidates to go first overall next season and has the upside to change any franchise that selects him.

If New York were to skip the point guard spot this season, it would to line up a chance to draft Cunningham next season, whether that be with their pick or a trade offer built upon draft picks.

Based on the reports about New York looking to select LaMelo Ball, there’s a hope that they jump from the sixth spot into the top two. In the event that the Knicks remain in the sixth spot, the best option may be to select the best 3-and-D wing player in the class, then double down with another wing later in the first round.