The Dramatic Shift in Knicks Fans’ Perception of Julius Randle 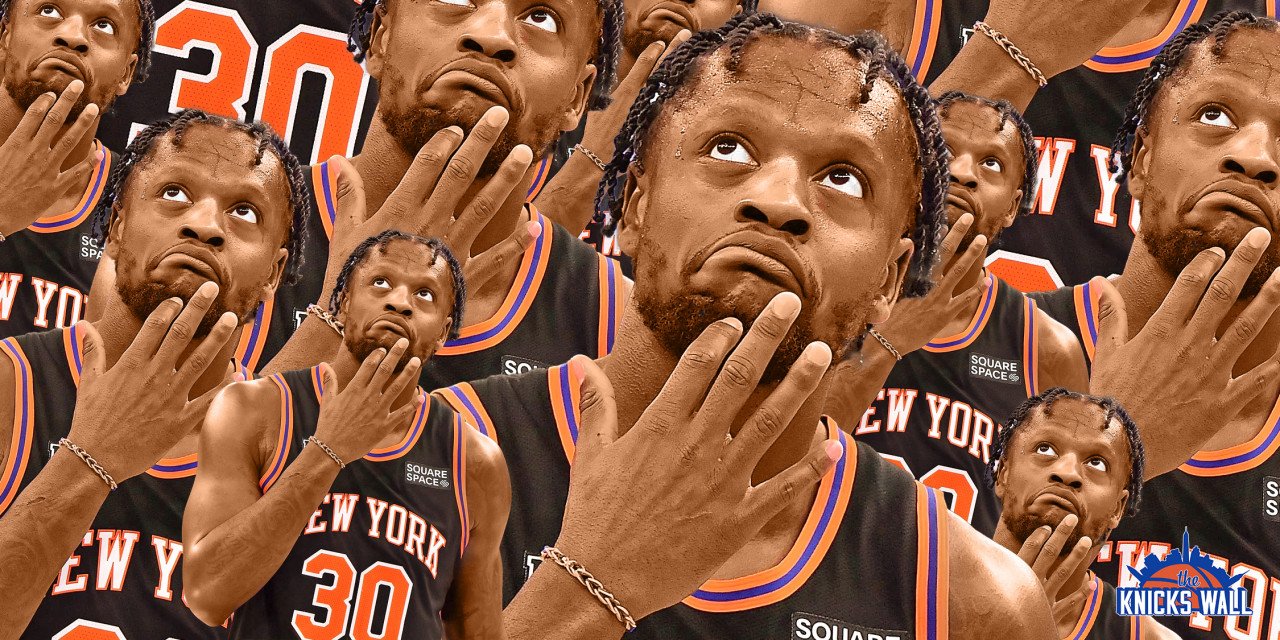 After a promising ’20–’21 campaign, Julius Randle has struggled this season, and his antics have Knicks fans completely fed up to the point of no return.

Just about a calendar year ago, the New York Knicks were gearing up for their first playoff appearance since the 2012–13 season and were the toast of the town, not only due to the fact that they were winning, but the moxie with which they were winning. When the ‘Bockers are playing well, an infectious aura spreads throughout the region, Madison Square Garden becomes the place to be, and Knicks games become more of a big-ticket event than normal.

Spearheading this renaissance was Julius Randle, in the midst of a career year where he ended up averaging 24.1 points, 10.2 rebounds, and 6.0 assists. “New York, We Here” was a huge rallying cry of last year and that quote really resonated with fans and specifically encapsulated Julius Randle’s commitment to the Knicks and willingness to be the face of an organization that had been so pathetic for the better part of two decades. Randle’s leadership was likened to Carmelo Anthony in the early 2010s, who took on the challenge of bringing the Knicks back to relevance. Randle took that role by the horns and really leaned into what Knicks fans love; a tough, productive, and emotional force who embodied New York City.

Julius Randle has done more for the organization this season alone than 'Melo did his entire time in New York. This will hit the Anthony apologists squarely in the gut, but it is what it is. Facts. pic.twitter.com/iD7wiNxcoL

Despite Randle’s most improved campaign last year, most of us knew deep down, that having Jules as your top player in today’s NBA just simply isn’t good enough to make a deep playoff run. In order to take the next step toward championship contention, there needed to be more stars develop internally like RJ Barrett, or the Knicks needed to grab a superstar-type talent who can be the number one option, while Randle fills the role of a number two.

Nobody was mad at Julius for that number two ceiling; he was certainly a star, just not a superstar who can carry a team deep into May and June. Even when Randle flamed out in the playoffs and didn’t perform well against the Hawks, there wasn’t much vitriol directed towards him, as most of us were aware that he isn’t a primary option on a really good team that was O.K. Randle’s effort, his embracing of the Knicks culture, and his apparent love for the city won fans over more so than his box score stats.

When the Going Gets Tough

Unfortunately, the 30-41 Knicks season is essentially over, as they sit five games back of the Hawks for the 10th seed with only 11 games remaining. With elevated expectations coming into 2021–22, the Knicks have grossly underachieved and the season has been flat-out embarrassing on multiple fronts, including the once-popular Julius Randle becoming public enemy number one in many Knicks fans’ eyes.

Not only have the 27-year-old’s stats have declined across the board, but his effort has waned and the number of hideous possessions Randle has been responsible for has skyrocketed as well. Randle’s tendency to try and play unnecessary iso-ball, not run back on defense, and not be able to control his temper with opponents and fans has been a huge theme of this season.

It seemed like Randle began to gain some equity back with the fans, solely because of his play in recent weeks; however, he ruined that completely last night when he escalated an incident at the final buzzer with Jazz center Rudy Gobert, in which Gobert looked to be trying to defuse the situation. Randle then stormed off past teammates and angrily made his way to the locker room after a tough loss at home.

Don’t know what precipitated this but just seems unnecessary from Randle. Led to a small postgame scuffle. pic.twitter.com/FAwhFWmXTx

Add last night’s incident to a laundry list, including him starting a fight with Cam Johnson of the Suns a few weeks back, getting into a heated exchange with video assistant Scott King on the sidelines, and of course the infamous thumbs down to the fans in which clarified that he wanted Knicks fans to “shut the f–k up.”

The outrage among Knicks fans has reached a boiling point undoubtedly and Randle has folded, becoming consumed by losing and pressure.

The term “can’t handle the pressure of New York” is often overused and just an excuse thrown out there when an athlete acts up or doesn’t perform well, but in Randle’s case, it seems like his sensitivity has really become exposed since the Knicks are struggling and his individual numbers have suffered as well.

The constant and justified criticism is being thrown his way in waves and taking it in stride has not been Randle’s approach to this. The combative and sensitive nature of Randle’s interactions with fans, referees, opponents, and some coaches does not play well at all especially after securing the $117 million bag in his offseason extension. To act like a complete malcontent is not great optics anywhere, especially in a blue-collar city like New York where people grind daily and do not complain or whine while making a fraction of what Randle is bringing in.

Yes, he’s human and I don’t expect him to turn the other cheek and not react sometimes, but unfortunately, this has become a pattern for Randle whose emotions are getting the best of him. What Randle fails to realize is that each passing incident makes fans resent him more and more, which makes it difficult to give him any benefit of the doubt. Another note is that no other Knick has acted like he has and every single player rocking the orange and blue this season has been part of disappointment and a rough campaign.

Jules’ behavior, combined with the fact that RJ Barrett seems to be taking the next steps into being a star makes it a lot easier to trade Randle and easier to swallow showing him the door. Randle’s fall from grace in terms of his relationship with fans has truly been an unfortunate sight.