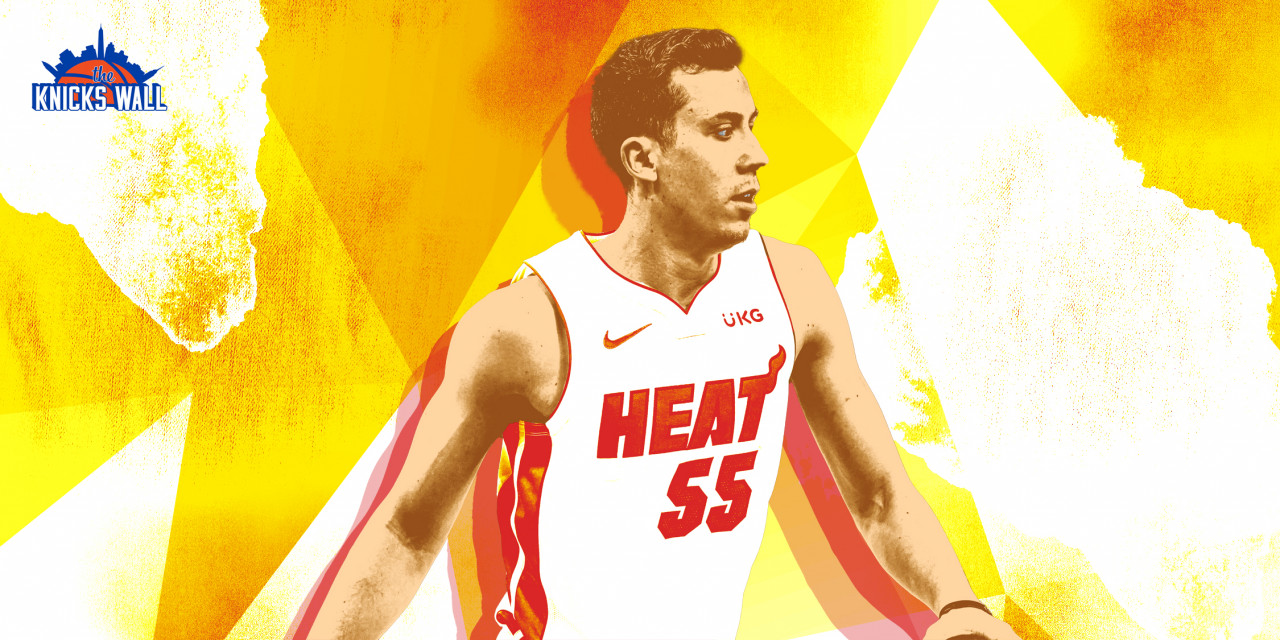 Heat wing Duncan Robinson, a restricted free agent, presents the Knicks with upside on the perimeter despite a hefty price tag.

The New York Knicks unwittingly helped spark the three-point revolution with their 54-win 2012–13 season, yet while three-point attempts exploded NBA over the course of the last decade, the Knicks—seemingly forgetting their key to their most successful season in over a decade and a half—lagged behind and spent much of the 2010s near the bottom of the league in three-point attempts per game. This year’s squad was one of four teams to shoot 30 or fewer threes a game; however, the difference was that they hit 39.2% of those they did attempt—the second-best percentage in the league.

The improvement from deep of Julius Randle and R.J. Barrett was a major factor in both the Knicks’ perimeter shooting turnaround and snapping the playoff drought, as did drafting Immanuel Quickley. With an extension for Randle undoubtedly a part of the front office’s plan, all three are likely to remain Knicks long-term—at least barring a major trade for a star. However, with Reggie Bullock, Alec Burks, Derrick Rose, and Frank Ntilikina all entering either restricted or unrestricted free agency the Knicks have four players who shot over 40% from deep that they either have to retain or replace.

Duncan Robinson, Miami’s sharpshooting wing, will enter restricted free agency once the Heat submit his $4.7 million qualifying offer. The 27-year-old former undrafted free agent spent most of his rookie year in the G League, but Robinson quickly developed into one of the league’s top shooters during the 2019–20 season. In fact, this past May he became the fastest player to reach 500 career three-pointers, doing so in 152 games—35 fewer than Luka Doncic’s 187 games.

Last season Robinson’s three-point percentage was slightly down, but his attempts were up. In his sophomore season, he hit 44.6% of 8.3 attempts per game. This season he hit 40.6% on 8.5 attempts. Only Stephen Curry, Buddy Hield, and Damian Lillard connected on a greater number of threes than Robinson.

Reggie Bullock led the Knicks in attempted threes last season with 6.1 per game, but he will be an unrestricted free agent with outside interest. Bullock made an average of $4.1 million per year over the course of his two seasons in New York, although with his performance this season, the 30-year-old 3-and-D specialist is in line for a raise.

Restricted free agency means that Miami could match any offer Robinson signs, but Bam Adebayo is set to make an average salary of about $34.7 million over the next four seasons, and Jimmy Butler will be making $37.6 million next year. Miami may prefer to spend money elsewhere, especially with Tyler Herro on the roster. Herro is not the shooter Robinson is—he has averaged 37.5% on 5.5 attempts per game in his first two NBA seasons—however, he is a more willing driver and passer and not to mention nearly six years younger. Robinson has been a key component of the Heat, who have the right to match any offer made to the wing, and Miami remains the odds-on favorite to sign Robinson for the 2021–22 season. The Knicks are a viable contender, but their interest will depend on which of their own free agents they retain. Odds he signs with New York are about +550, according to Sports Betting Dime, which equates to about 15.4%. While their shooting let them down in the playoffs, they were the third-best three-point shooting team in the regular season—Robinson’s only real asset. If they retain the likes of Burks and Bullock, there wouldn’t be much room for Robinson.

On a recent episode of his podcast “The Long Shot,” Robinson expressed a desire to stay in Miami but admitted nothing was written in stone, “I don’t give much information, but I mean, it’s no secret that I’ve loved my time in Miami,” he said. “And I’d love to try to make something work with Miami. The reality is, I tell this to my family, I don’t know how the next 10-plus days, two weeks—how it’s going to play out.”

The Knicks could take advantage should the Heat decide Robinson’s money could be better spent elsewhere. Robinson would be perfectly suited to step into Bullock’s role of knocking down threes off the catch. Per Cleaning The Glass, last season 97% of Robinson’s three-point makes were assisted, a nearly identical figure to Bullock’s 98%, demonstrating how the Heat wing could fit like a glove in New York’s offense.

Sliding Robinson into Bullock’s place in the starting lineup, allowing Randle, Barrett, and whoever they sign to play point guard to kick out to one of the league’s most lethal shooters off the catch is the sort of move that could keep the Knicks near the top of the league in three-point efficiency. The Knicks aren’t going to suddenly start letting it fly from deep under Tom Thibodeau, they need to make the most of every attempt.

Robinsons’ 8.3 three-point attempts per game also came while Miami played at the second-slowest pace in the league. So coming to the Knicks—the slowest team in the league—won’t cause a precipitous drop in attempts.

With Thibodeau at the helm and a long offseason to both implement a defensive scheme and build continuity, the Knicks are also equipped to absorb a player with Robinson’s limitations. Bullock is a quality defender both on and off-ball, but again depending on who’s playing the point, Robinson could be the only minus-defender in the starting lineup. Barrett has the frame and the strength to check most small forwards which would allow Thibs to hide Robinson on defense. Plus not there should be another Robinson returning to the fold for New York improving an already elite defense.

The question for the Knicks’ front office is: Would Robinson be enough of a shooting upgrade to justify a higher cost?

Last November, a then-28-year-old Joe Harris signed a four-year, $75 million contract with the Nets, coming off a season where he hit 42.4% of threes on 5.9 attempts per game. The very next day, the Washington Wizards signed a 27-year-old Davis Bertans—who on 8.7 attempts per game also hit 42.4% of his threes the year before—to a five-year $80 million deal. These are the sort of numbers the Knicks will have to meet in order to stand a chance at snagging Robinson away from Miami.

New York could have upwards of $73 million in cap space this offseason. An anticipated Randle extension, a likely re-signing of Rose, and hopefully the acquisition of a starting point guard (potentially Kyle Lowry or maybe Lonzo Ball) all would cut into this, but without any attainable superstar free agents, Robinson is the right kind of player in which to invest … even though they would wind up having to overpay.

Robinson is still young enough to match up with Randle and Barrett’s timeline. Shooting always has value too, should the need arise down the road, the Knicks wouldn’t have too much trouble finding someone to take him off of their hands. But perhaps most importantly, Robinson is an absolute grinder. He began his college at a Division III school before transferring to Michigan. During his senior year, he reached out to Mark Titus (then of The Ringer) asking for advice assuming a career in sports media was a more likely path for him than the NBA. From undrafted free agent to one of the best shooters in the league, his is a story of hard work and determination that may as well have been made up specifically to appeal to Tom Thibodeau.

Some Knicks fans have an aversion to the prospect of paying anyone who isn’t a bona fide superstar. Kawhi Leonard is not walking through that door, but Duncan Robinson could be, and the Knicks would be lucky to have him.