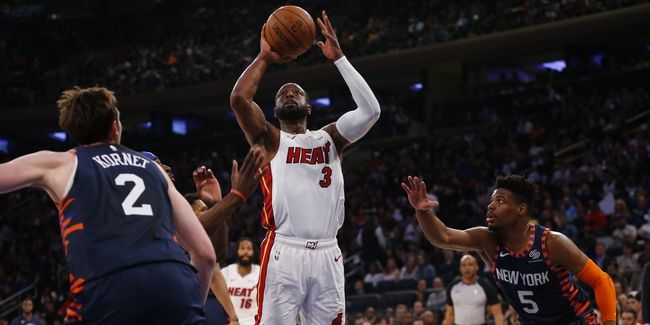 The Knicks collapsed in the fourth quarter with Dwyane Wade saying farewell and the Miami Heat escaping with a win at the Garden, beating the Knicks 100-92.

After leading heading into halftime, a second-half collapse led to a 100-92 Miami Heat victory over the New York Knicks on Saturday at the Garden.

The Knicks have now dropped six in a row, and currently possess an NBA-worst 14-62 record. With just six games left in the season, the Knicks have a chance to surpass their franchise-record in losses in a season at 65, a feat “accomplished” by the 2014–15 Andrea Bargnani–led Knickerbockers.

Let’s take a peek at what happened in tonight’s contest.

Coming off a career-best game on Thursday, Mitchell Robinson certainly didn’t disappoint on Saturday night. Robinson provided BIG MITCH ENERGY from the start, receiving the starting nod at center and finishing with nine points, 14 rebounds, and four blocks in 37 minutes.

It seems that head coach David Fizdale is finally letting Robinson get the minutes he deserves in New York’s final handful of games. Expect him to start and continue getting 30+ minutes a game in these six games.

Lance up top for Robinson!

Emmanuel Mudiay finished the game with a team-high 24 points. However, it’s important to note that 10 came from the charity stripe. Although in the box score it appears Mudiay had a great performance, he also had the worst plus/minus on the court at -14. This statistic should speak for itself.

While Mudiay led the offense efficiency to 61 first-half points, a scoring drought in the fourth quarter with the 23-year-old on the court spelled doom for a potential Knicks victory on Saturday.

One of the lone positives in a disappointing season, Dotson has had a heck of a sophomore season. He’s become a go-to scoring option for the Knicks and boasted his points average from 4.1 points per game last year to 10.9 this season.

With that said, tonight was not his night. Dot had arguably his worst game of the season, recording two points from the free throw line but going 0-of-8 from the field. He tacked on four assists and three rebounds but also posted a team-high four turnovers. This all occurred in just 24 minutes of play. It clearly was not Dame Dot’s night, and I’m sure Monday can’t come soon enough.

Tonight, DSJ was limited to 18 minutes of play, but recorded 12 points (6-of-14), four rebounds, and two steals. More importantly than his statistics in the box score, DSJ was the lone Knick to record a positive plus/minus rating at +3.

It was a solid performance from DSJ, who will likely serve a limited role for the remainder of the season as he nurses a back injury.

In tonight’s contest, Luke Kornet attempted a total of 14 shots. Among these, 13 were from beyond the three-point arc. Kornet went 5/13 from three and finished the game as the second-leading scorer for the Knicks with 17 points. He also posted eight rebounds, three steals and three blocks.

It’s still hard to believe that Luke Kornet attempted 13 three-pointers in a contest, but only in the 2018-2019 New York Knicks season would something like this come to fruition.

Tonight’s contest marked the final game of Dwyane Wade’s career at Madison Square Garden. A future first ballot Hall of Famer, Wade posted 16 points and seven rebounds in the contest. He also received a tribute video from the Knicks, including praise from former Heat assistant coach Fizdale, and walked out to the court to a standing ovation from the Garden faithful.

Although Knicks fans have had to endure him torching their coveted team for more than a decade, it was a special night to pay homage to an all-time NBA great.

The Knicks are back in action on Monday, when they host the Chicago Bulls at 7:30 p.m. ET.