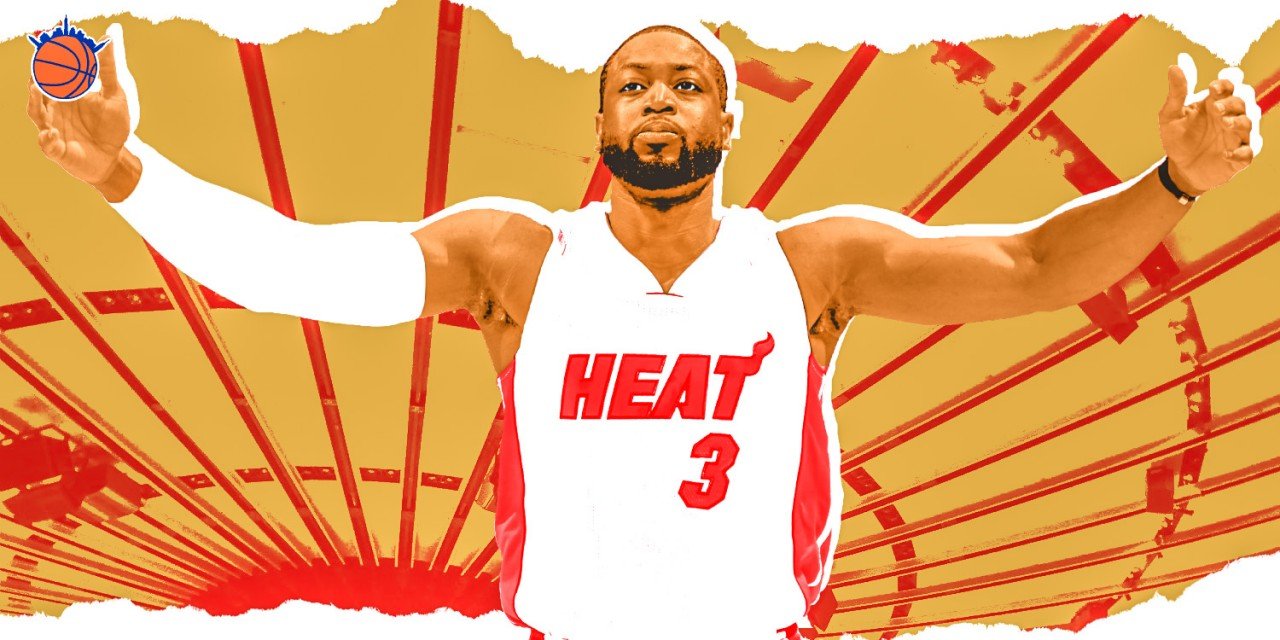 Before the NBA living legend hangs up his threads, Dwyane Wade has a final game at the Garden to play on Saturday—an arena where many a famous moment took place for Wade.

On December 10, 2018, after the buzzer sounded on the final meeting between former teammates Dwyane Wade and LeBron James, the current Lakers forward was “overheard” saying to his banana-boat buddy, “It was either here or the Garden.” Wade seemingly agreed.

HOLD UP a second…

After Wade says “I appreciate you letting it end here,”

LeBron says “it was either here or at the Garden.”

YOU GOTTA BE KIDDING ME @nyknicks!!!!!! pic.twitter.com/yJFzthxgJO

It was kind of a weird—and cruel—comment, considering neither player ever donned the orange and blue, nor seemed to truly consider signing in New York (and even laughed at the notion). But, it was also another reminder of the high regard the top players in the game still hold for “The World’s Most Famous Arena” and its luster, despite the endless struggles of the Knicks and the decline of New York City’s hoops imprint.

Cliché or not, the Garden is a uniquely important NBA stage and has consistently served as a special platform for stars to put on a show amid the dregs of the regular season. Simply put: it’s dope when stars turn up for the Garden, and we should fondly cherish those moments (especially considering the building’s tenant doesn’t provide enough of them.)

So, before Wade’s #OneLastDance in Midtown this Saturday, we’re going to revisit his best MSG moments. Before we do, though, let’s recall how close Wade actually came to making the Garden his home court (spoiler: not very close).

As Amar’e Stoudemire’s financial beneficiaries will remember, the Knicks were aggressive and desperate to land a star in the 2010 free agency sweepstakes. Heading into the meeting with Knicks brass (alongside Chris Bosh), Wade claimed to be in “in a New York state of mind” (a top-10 Knicks moment of the century, at the time). Afterwards, Wade said he was “intrigued” by “a real good meeting,” though in retrospect he was probably just being polite. As he later revealed—and this will come as a shocker—it turns out that spending multiple hours with James Dolan (and Donnie Walsh) did not leave a great impression on him.

“They just wasn’t prepared,” Wade said. “They wasn’t ready to take on what we wanted to do. The city? Yeah, the city was ready. The market? The market was there. It’s New York. But (from) an organization standpoint, we didn’t feel like they could handle it.”

The Knicks reportedly again flirted with signing D-Wade in 2016, and Carmelo Anthony believed they were close (a 34-year-old former All-Star with name recognition and midrange proficiency does seem right up Phil Jackson’s alley). Ultimately, Wade signed in Chicago, as the Knicks didn’t want to jeopardize their chance at giving many millions of dollars to Joakim Noah, Courtney Lee, and Brandon Jennings.

“It is no secret that besides the American Airlines Arena, [Madison Square Garden] is my favorite place to play,” Wade said in 2012.

Wade hasn’t quite had an unforgettable performance on the level of MJ’s double-nickel, Kobe’s clinical 61, LeBron’s 50-point (non) triple-double, Steph’s coming-out party, Harden’s recent 61, or Reggie Miller’s, like, entire career, but he’s had his moments. In 24 regular-season appearances at the Garden, Wade has averaged 22.8 points per game, slightly above his career mark of 22. (His finest performance against the Knicks was a career-high 55-point onslaught in 2009 in Miami. Also worth noting: Wade was named to the 2016 All-Star Game at MSG.)

Let’s look back on some of his memorable Garden moments and performances, and appreciate some impressive mid-2000s Knicks random incompetency along the way. In chronological order:

Entering his junior year at Marquette, Wade was already a national sensation and one of the county’s premier players, and MSG offered the ideal venue to jump start his third campaign for the Golden Eagles—one that ended in a Final Four run and a triple-double in the Elite Eight. In a 73-61 win over Villanova, Wade posted 17 points, five boards, and four dimes (plus zero turnovers), including—apparently—a spectacular second-half alley-oop that hasn’t been unearthed.

Wade had a solid rookie season, but his pro introduction to New York did not go as planned. He had six points and six turnovers for a -24 in 39 minutes, and the Heat lost by 31 points. In Young Wade’s defense, he was going up against this juggernaut of a Knicks squad:

A couple years later, the Heat came in with Shaquille O’Neal in tow and as one of the best teams in basketball. Wade put up a characteristic 30 points on 10-of-22 field goals, zero threes, and 10 free throws (plus six dimes and six boards). Wade dropped 10 points in overtime and took Stephon Marbury off the dribble for a dagger layup in the extra period (again, please someone find the clip). Marbury dropped 36 points on 27 attempts in a loss, and surrendered 24 points to…Damon Jones.

D-Wade’s most indelible Garden moment: An on-brand 22-foot fadeaway to give the Heat their 10th victory in a row and 50th on the season. Afterwards, Wade said, “That’s a shot I always dreamed of taking, especially at the Garden. It was a dream come true of mine.” He had 24 points and five assists.

Gearing up for a title run, Wade dropped a typical 30 points on 10-of-17 shooting to go with nine dimes. I’m mostly including this game just to point out that the 19-46 Knicks started Marbury, Steve Francis, Eddy Curry, and both Malik and Jalen(!) Rose. In other words, Isiah Thomas was just getting warmed up.

We’d have to check the tape to see the player Wade was predominately checking, but Knicks legend Jamal Crawford absolutely went off for 52 points on 20-of-30 field goals(!), 8-for-10 from three(!), including a stretch of 16 buckets in a row(!). #JamalCrawfordForever.

On this Christmas, Wade dropped his customary 30 points to go along with nine boards, five dimes, and four steals, and dropped down David Lee’s chimney to deliver a fourth-quarter slam.

The game ended up being a lopsided Miami victory, but the first “Heatles” show at the Garden was nothing short of a spectacle. LeBron took some earfuls from Spike Lee and responded with a 32-point triple-double, while Wade added 26 and filled up the stat sheet.

After the game, LeBron reiterated his and Wade’s affinity for MSG.

“This is a great building,” James said. “Myself and D-Wade talk about it all the time. Certain buildings in this league that you just thrive on and you’re excited about, and this being the mecca of basketball, as a kid you always envision not only playing in the NBA but also having a chance to play in Madison Square Garden.”

Ahh, the 2010-11 pre-Melo-trade days. In the weeks prior to the deal, the frisky Knicks team of future-Nuggets, MVP-level Amar’e and rookie Landry Fields (19 points, 13 rebounds, and six assists in this one—forever a hero) actually held off Miami for a rollicking 93-88 win. Wade posted 34 points and 16 rebounds despite a lingering migraine, though he missed all seven of his looks in the fourth quarter.

The Garden looked hype on this night, including a certain New York-based reality TV host

Wade actually played two postseason games at the Garden, which is a lot more than the vast majority of NBA players can claim. The Heat toppled the Knicks in five in the opening round, as Wade contributed 20 points in Game 3 and 22 in Game 4 (Knicks pulled that one out). More notably, Wade wreaked havoc on D, nabbing nine steals over the two games and three blocks in Game 4—a reminder of how overwhelming those peak-Heat defenses could be when they were locked in.

In this adorable NBA moment, Wade’s better-half, Gabrielle Union, delightfully video-bombed his postgame interview and evaluated her beau’s performance. “It was O.K…He did good for an old-geezer.” Boom, roasted.

In Miami’s first trip to the Garden this season, Wade posted a solid 15 points and 10 assists. He also received a standing ovation and MVP chants.

As a bonus, Wade and his teammates cooked up a little pregame appetizer, in the form of a Ja Morant-style alley-oop in warmups. Wade said after, “We’ve been trying to do it at a team…for some reason we haven’t completed it right. So I decided to step up in the Garden at complete it.”

This game was also unofficial Melo Night, and Wade embraced and complimented his pal.

“Not a lot of athletes can embrace what comes with playing in the Garden and playing in New York,” Wade said.

After the game, he expressed his gratitude for the Garden faithful. “Listen to the love up in here at the Garden.”

Saturday should be a great occasion, and the Knicks and the Garden faithful will surely take the time to honor Wade. He’s actually been playing well as Miami competes for the eighth seed, so he’ll hopefully grace the Mecca stage with some vintage Flash(es) one more time.