Early Returns Suggest the Knicks Are Heading in the Right Direction 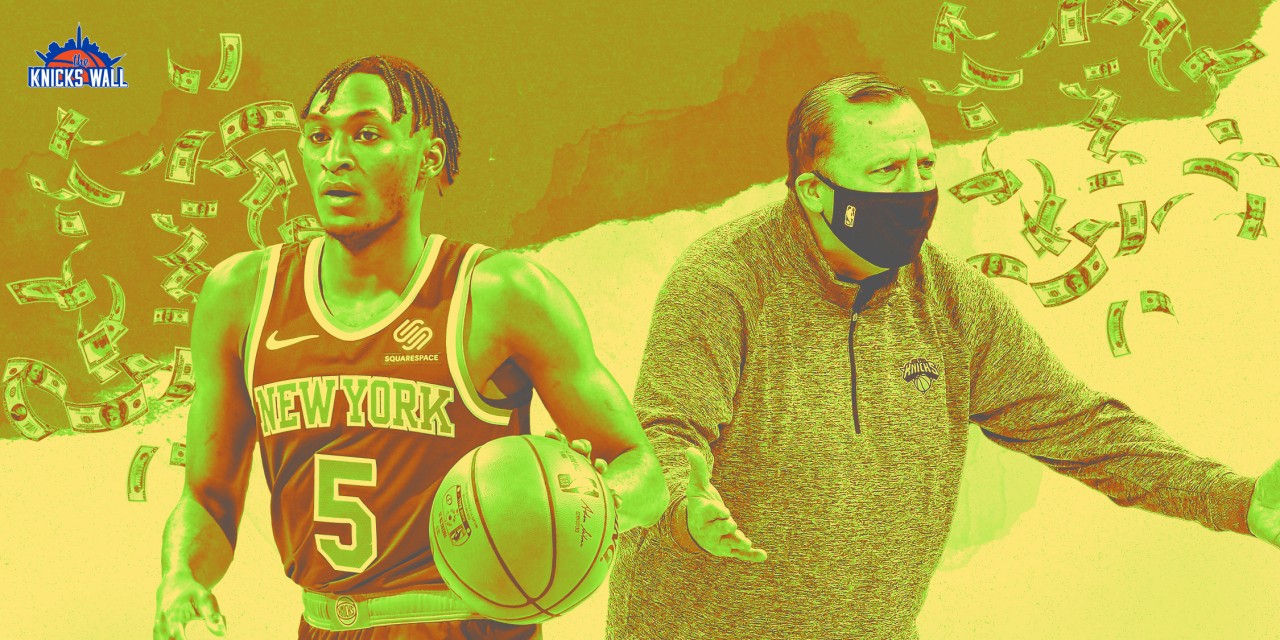 The Knicks have been on winning and losing streaks, but Tom Thibodeau’s team has demonstrated a stronger pattern for their (perpetual) nascent rebuild.

Coming into the 2020–21 season, the New York Knicks were expected to be more of the same from the previous campaign. Even as the NBA moved to a truncated 72-game schedule, Vegas Insider had New York’s over/under at 22.5 wins, one of the lowest marks in the Eastern Conference, meaning the insiders expected the Knicks to largely be the same team we saw during the 2019–20 season.

Honestly? Vegas had every reason to believe the Knicks would remain in the lower tiers of the Eastern Conference. The offseason wasn’t built on improving the roster as much it was set on maintaining flexibility. After eight months into his tenure, President Leon Rose opted to supply the front office with notable names rather than aggressively attack the free agency class. As a result, the Knicks brought back three of their starters and added cheap veterans who can fill spots.

Fast forward through the team’s first 20 games of the season, and it appears the Knicks are ahead of schedule.

Not impeccable timing as the Knicks sit at 8-11 on the year and are coming off the back of three straight losses. Though flirting with a top-10 spot in the Eastern Conference, and thus, a spot in the playoff game, the Knicks are still away from making the playoffs with modest expectations. However, the combination of young players, coaching, and assets shift New York from a rebuilding team to a team that could enter the 2021 offseason looking to make a splash.

Although Rose didn’t make any big-name player additions on the roster, he did make two moves. The first was surrounding himself with smart minds—Frank Zanin and Walt Perrin from Utah, and Brock Aller from Cleveland—to create a strong group of minds to head his basketball office. The second was selecting a head coach that could implement a system—hiring Tom Thibodeau, the former Knicks assistant and Bulls and Timberwolves head coach, to coach the roster.

Much like his previous stops around the league, the Thibodeau era’s early return has been solid. For Thibodeau’s warts on offense, the defense and the effort have improved. Nearly three-tenths through the 2020–21 season, and the Knicks are ranked fourth in defensive efficiency, a sizable jump from the 2019–20 numbers. That said, there are some questions about the Knicks defense’s sustainability, specifically the above-the-break three. Despite allowing the second-most attempts behind the Milwaukee Bucks, the Knicks allow the lowest percentage in the league. Something to consider in the long run.

Player development, along with Thibodeau’s defense, has been the key reinvestment for the Knicks. While the entire coaching staff has their influence in helping players improve, Johnnie Bryant, Kenny Payne, and Daisuke Yoshimoto were lauded for their emphasis on development among their arrivals to New York—Yoshimoto for his previous tenure with Thibodeau, Bryant with Donovan Mitchell in Utah, and Payne during his tenure at the University of Kentucky.

It has started with some of the younger players getting better minutes and playing well. After two nondescript seasons in New York, Kevin Knox has shown a pulse to start the season, working as an effective catch-and-shoot threat. Rookie Immanuel Quickley, who largely played off-ball at Kentucky, came in and became comfortable leading the offense right away and looks like a contributor moving forward.

Again, these are early returns, but Thibodeau’s installment of a defensive mindset with maximum effort is great for this young team, while the renowned push towards player development could serve as two building blocks for how the Knicks build and design their roster for years to come.

The on-court results have been promising

Alongside Knox’s rebirth and Quickley’s hot start has been a moderate step forward from some of New York’s other players. It starts with Julius Randle. Randle, who struggled in his first season in New York, is on pace to see his first All-NBA team and All-Star honors with 22.5 points, 11.3, and 6.0 assists per night, giving Thibodeau an offensive hub to lean on as installs his system and the front office an interesting decision to make leading up to the trade deadline.

It has also rejuvenated New York’s two young players—Mitchell Robinson and R.J. Barrett. Robinson has seen his block percentage decrease (5.6%), but it has led to a more reserved intimidator status down low, allowing him to cut down on his fouls (3.3 per 36 minutes). Thus, Robinson has remained on the floor, serving as a consistent rim-running threat, highlighted by his ability to impact shots at the rim. His field goal differential of -7.0% has him tied for seventh in the league among players under the age of 25.

As far as Barrett is concerned, everything has played up. He’s an effective off-ball defender who can stand his own as a post defender. His 3.4 assists per game suggest he has upside as a secondary creator and a sizable jump in free throw shooting in his sophomore season (currently at 74.4%, up from 61.4% as a rookie) is a positive sign for him one day becoming a solid shooter. The shooting and lack of athleticism remain a crux in his profile, but he has responded positively to Thibodeau’s arrival.

Career-high 28 of them thangs for @RjBarrett6 in the Bay 🔥 pic.twitter.com/hEY0KJhOr8

Between Barrett, Robinson, and Quickley, the Knicks have three solid players under the age of 25. Knox still has ways to make this list, improving his secondary skill and as more consistent inside the arc. 2020 eighth overall pick Obi Toppin is returning from injury, playing sparingly behind Randle. Toppin has solid underlying skills (passing, spacing awareness) and ways to go to be an effective NBA player on both sides of the ball. None of these players appear to be stars but offer a base to get talent around moving forward, or pieces to move in trade.

Within the first 20 games into the 2020–21 season, it’s fair to say the Knicks are on the right track with the roster’s current alter. They’re moving from a team wandering through a rebuild to a team that’s starting to put pieces together. The combination of Randle’s elevated play, Thibodeau’s defense and effort-based system, and a litany of draft capital and cap space place the Knicks in a space where they can be a bit more aggressive this upcoming offseason than the previous two.

However, there’s much more work to do with the roster, the scheme, and, ultimately, the addition of talent to this roster. For all of the defensive plaudits Thibodeau has earned, the offense remains a mess. Almost all of New York’s goodwill on defense is given up on offense, ranking 25th in offensive efficiency. Part of the issue is the lack of outside shooting—30th in the league in three-point frequency, 30th in attempts, and 23rd in three-point percentage, via NBA.com.

The second is the true need for a point guard, which the Knicks have lacked since Walt Frazier.

A lead guard who can help make teammates better should be high on Leon Rose’s board this offseason, but one temporary solution is simple: starting Quickley over Elfrid Payton. Quickley offers the shooting Payton doesn’t, is better at drawing fouls, and, at 21, has a better long-term future with the Knicks. Even if he doesn’t quite fill the criteria of a “lead guard,” Quickley has all the tools to be an effective guard who can work off of Barrett and Randle.

The improvement of point guard play and shooting on the Knicks could propel New York from a team outside looking into a team with playoff aspiration. Even before moving forward, the Knicks—do the Knicks make a move at the trade deadline? Will the Knicks get aggressive in adding a star this offseason? These are the questions that await Rose and the front office in the coming months.

The New York Knicks have plenty of steps to go before becoming a true playoff threat, but New York seems to be headed in the right direction after several false launches. Thibodeau’s defense’s early returns, the team’s renowned emphasis on development, and the team’s younger players stepping forward have the Knicks moving in the direction.