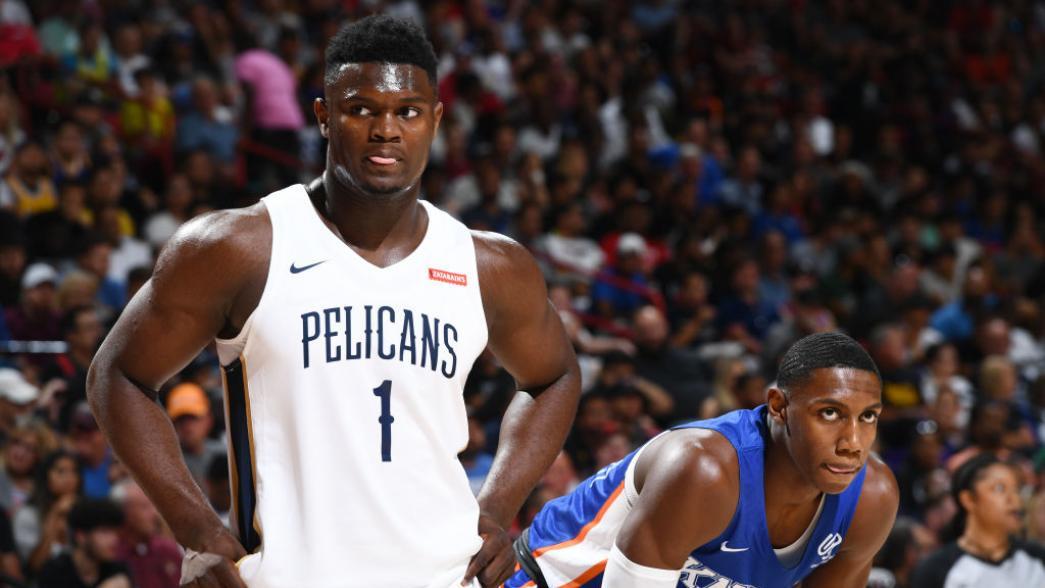 A 7.1 magnitude earthquake was felt from Las Vegas to Los Angeles, and the first Summer League game for the Knicks and Pelicans was put on hold due to safety concerns.

The New York Knicks are back and already in midseason form as they gave up an early 20-point lead that led to a suspended game in Friday night’s bizarre matchup with the New Orleans Pelicans. The much-hyped Summer League showcase featuring Duke teammates and first and third overall picks, respectively in the 2019 NBA Draft Zion Williamson and R.J. Barrett had to be suspended with safety prioritized over hoops during the frightening earthquake.

Kadeem Allen, Allonzo Trier, Barrett, Kevin Knox, and Mitchell Robinson started and the second-year players were off to an incredibly hot start.

They caught fire from three early on with Knox hitting three triples in the first quarter. Trier, in his own fashion, was shaking and baking, scoring with his own steeze. The biggest story wasn’t former teammates Barrett and Zion Williamson facing off, but Robinson welcoming Williamson to the NBA by initiating him to the fraternity of big men. Robinson proceeded to block Zion a total of three times. On one sequence he flushed a lob, blocked Williamson’s three, and then dunked the turned over ball on the other end.

WHAT A SEQUENCE FROM MITCH

In typical Knicks fashion, however, they gave up a double-digit lead as soon as possible. Even with Williamson out in the second half due to a knee-to-knee contact scare, the Pelicans ate away at the lead then eventually began to build some momentum of their own.

The Knicks’ rebounding and lackadaisical defense were easy culprits, but the individual finger-pointing told a more disappointing story. Frank Jackson, another rising sophomore, torched the Knicks by scoring 30 points through the first three quarters. Kadeem Allen had no answers on either side of the ball. Already on shaky ground as a G League pick-up from the previous season, if he doesn’t impress with his subsequent performances, Allen could find himself off of the roster come October.

R.J. Barrett had a terrible performance on both sides of the court in his professional debut. He nailed a couple tough shots, but after those few went down he kept shooting—to the detriment of the team. The “Maple Mamba” moniker rang true for the wrong reasons as he played like his shot was the most reliable when it couldn’t have been farther from the truth. It was a Summer League game and there’s no need to over-analyze it, but the New York rookies’ performances were disastrous no matter how you put it. They played bad basketball in a Summer League tilt, nothing more, nothing less.

Trier stayed true to himself later in the game and attempted to dig the Knicks out of the hole their ice cold third quarter put them in. An and-1 and a contact dunk during an earthquake cut the lead before the game was postponed.

The exact date and time for the final minutes of the game are currently unknown, but league officials assured viewers that the game would be completed eventually.

Knicks game against the Pelicans was canceled because of an earthquake. Original announcement was postponed but resuming a Summer League game never made sense. It’s a final and Knicks lose.

»READ: Knicks Summer League: what to watch for in Vegas