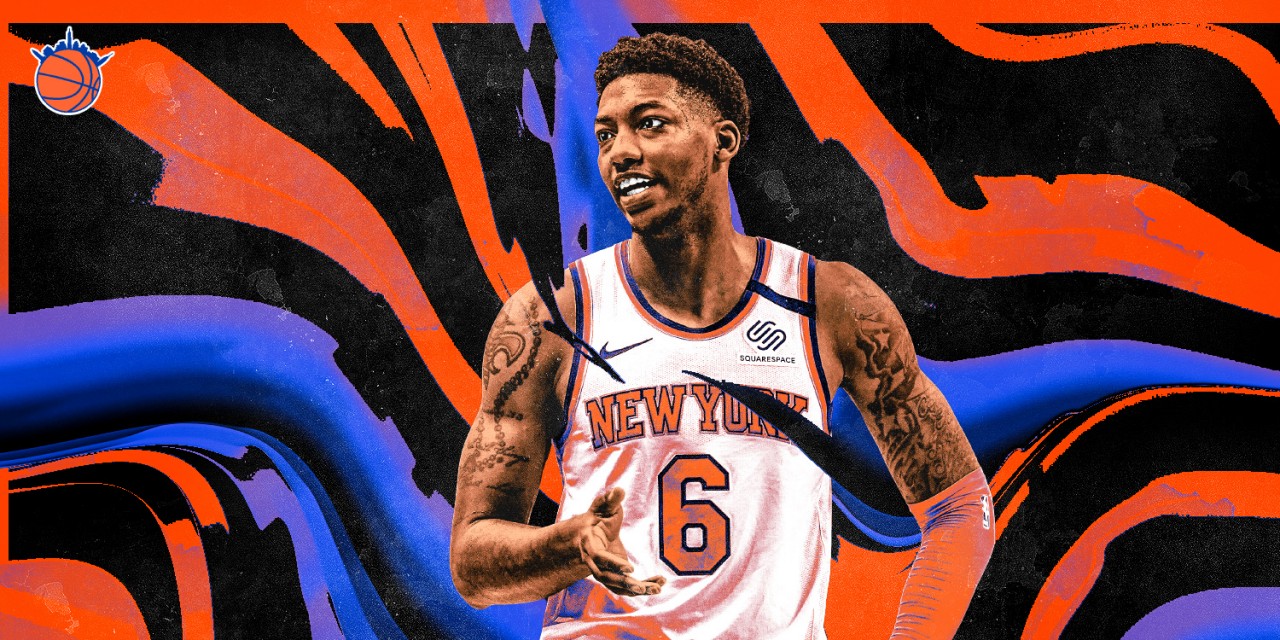 The Knicks technically have point guard Elfrid Payton signed through next season, but he’s also a hinderance to two younger guys’ development. It’s a dilemma.

Elfrid Payton’s standing with the New York Knicks boils down to two diverging facts: 1) he is the most impactful point guard on the Knicks’ roster, and 2) his success impedes the development of two important young players.

Payton’s presence invites the question of organizational priorities: Is the potential charge he is leading toward the Eastern Conference’s eighth seed worth the expense of minutes for Frank Ntilikina and Dennis Smith Jr.? It’s not Payton’s fault he has earned minutes and has contributed toward winning. He puts significantly more pressure on the defense than Ntilikina does. Smith, thanks to his wild inconsistency and seeming disinterest at times, has regressed to becoming a full-on project.

Still, Payton is not necessarily a part of the Knicks’ future. He is under contract for $8 million next year; however, only $1 million is guaranteed. The Knicks have until June 28th to part ways with Payton, in which case they would only owe Payton $1 million and he would become a free agent. Defining Payton’s value to both the broader NBA market and the Knicks is complex.

Competent point guards are valuable, and getting into offensive sets is important. Remember how ugly the offense looked under David Fizdale’s “Point Randle” phase? Payton has been able to both get Julius Randle going and prevent the big man from having the ball in his hands too much.

Payton has been invaluable for New York and he’s third on the team in Net Rating at -3.8, per NBA Stats, in spite of his biggest flaw: shooting. Payton’s shooting numbers have been appalling this year. His mechanics are ugly; he often looks like he forgot to release the shoot button in 2K and launches the ball a split second before he lands. Poor mechanics coupled with historically poor shooting numbers (45.2 career field goal percentage, 29.5 career three-point field goal percentage, and 62.4 career free throw percentage) indicate that this part of his game is likely fixed as it is.

When evaluating Payton’s future with the Knicks it is important to understand the value non-superstar point guards are commanding on the broader NBA market. Only four playoff teams as of February 17th feature point guards as their highest usage player: the Celtics, Nets, Grizzlies, and Thunder. In many cases, point guards are taking on increasingly supplemental roles, as the contemporary NBA template for contention seems to be high-usage, playmaking wings surrounded by shooters and a rim protector (think LeBron on the Lakers, Kawhi on the Clippers, Giannis on the Bucks, Luka on the Mavericks, etc.), with the point guard providing secondary ball-handling duties.

Average point guards play a much less pivotal role for an NBA team. I would rate Payton as an average to slightly below average point guard. Getting outside of the superstar to superstar-ish/All-Star class and the younger, fringe All-Stars, the case for Payton falling in the top 15-20 range for point guards from a team-building perspective is not much of a stretch at all. Three interesting comparisons for him are Eric Bledsoe, Ricky Rubio, and Terry Rozier. Bledsoe is an elite defender, making the 2018–19 All-Defensive First Team, but, similarly to Payton, his shooting has cost him in pressure situations. Rubio’s career three-point percentage and field goal percentage are not dissimilar to Payton’s numbers, but he also gets the edge defensively. Rozier, meanwhile, has the best counting stats of the three, but they are largely empty. His ability to put up big numbers duped the Hornets into signing him to a massive three-year, $56.7 million contract.

The Knicks lucked out when Charlotte scooped up Rozier, as they then did not have the opportunity to overpay for an unproductive guard. While Payton is the last of the Rubio and Bledsoe group you would take in a pinch, his contract is an absolute bargain compared to the others. Bledsoe (four years, $70 million extension with $4 million guaranteed for the final year) and Rubio (three years, $51 million) are both taking up significant portions of their teams’ cap space and have proven to have a ceiling when it comes to their ability to contribute positively in the playoffs.

When it comes down to on-court product, I would take Bledsoe and Rubio over Payton, but given the Knicks’ current organizational standing, I’m not sure either of them move the needle. But when analyzing on the macro level, it’s pretty easy to see that the Knicks are getting Payton’s value at a pretty significant discount compared to what similar players have earned through free agency.

The question then is whether Payton’s presence on the Knicks helps the organization achieve its long-term goals or not. Ntilikina has developed into a solid rotation piece, but he is clearly only comfortable playing an extremely limited offensive role. Lots is going wrong with Smith Jr., and his confidence seems to get shaken with the less time he gets. In January, Payton averaged 29.5 minutes per game while Ntilikina and Smith combined to average 27.5 minutes a contest. If the Knicks see their two young guards as core pieces of the franchise moving forward, the minutes distribution will continue to be an issue.

Payton is only bringing value to the Knicks so long as he is helping the younger players get better. Playing next to winning teammates is important for young players. This is not to say that Payton brings the ever-coveted “winning culture” to the Knicks locker room; he has, in fact, never been on a winning team. He still checks out on defense too frequently.

He is, however, a competitive NBA player, and the Knicks are a better team with him on it. New York is 7.0 points per 100 possessions better when Elfrid Payton is on the court (per Cleaning the Glass). The team’s offensive product is generally much more appealing and akin to other NBA offenses when plays. Throwing up meaningless shots last year did nothing for the likes of Smith and Kevin Knox. By making the players around him better and getting young players exposure in close games, Payton is valuable. Developing pick-and-roll chemistry is vital for Mitchell Robinson’s offensive growth. R.J. Barrett needs to grow as a cutter and shooter. Knox needs to rediscover any semblance of rhythm. Payton’s creation helps all of these players with that.

Recently, Mike Miller has shown interest in getting Ntilikina more reps as a shooting guard. I endorse this. Frank and Elfrid have posted a +18.2 NetRtg in limited minutes (56 total) together, and Frank and DSJ are positive together as well (+3.1). Ntilikina easily fits the mold of someone like Shaun Livingston—an elite defender who can take tougher assignments but doesn’t need to initiate the offense. Getting him more minutes there gives Smith the opportunity to split Payton’s point guard minutes. Given the elite bargain that Payton’s contract is and the avenues he opens for the team, look for the Knicks to pick up his option next year.

Considering the positives Payton can bring to the organization, his contract for next year is an elite bargain. Miller has yet to find the balance between playing Payton and promoting youth development. If the Knicks are savvy enough to pick up Payton’s option, and whoever is coaching the team next year finds that balance, the Knicks will find themselves in an ideal position.

This article was updated with the correct stat for Elfrid Payton’s on/off differential.

»READ: Mike Miller vs. David Fizdale: what have the difference been?