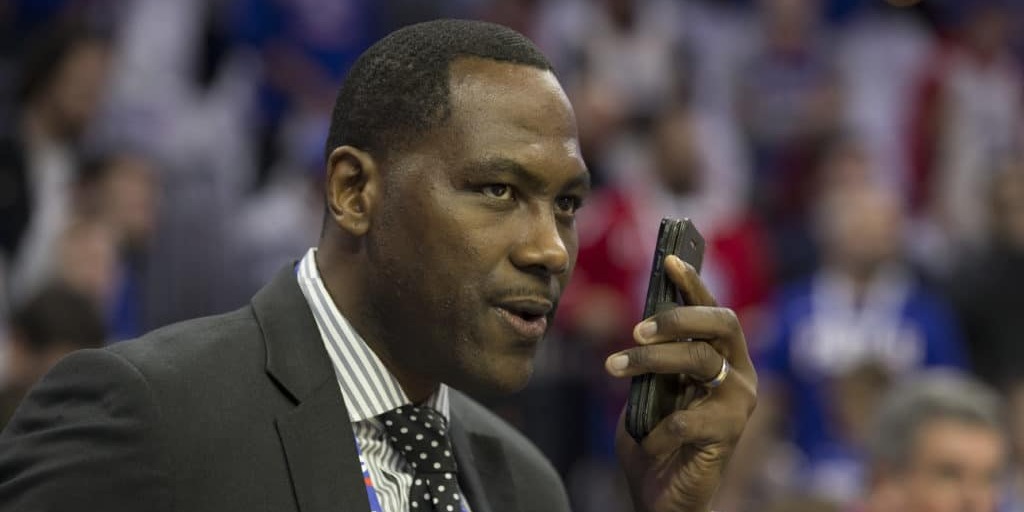 The Daily News reported new Knicks President Leon Rose is eyeing Sixers GM Elton Brand for the same role, which would be a mistake.

New York Knicks President of Basketball Operations Leon Rose is reportedly interested in bringing in Philadelphia 76ers general manager Elton Brand for the same job northeast on I-95. According to Stefan Bondy of the New York Daily News, a league source said Brand is a target for New York’s new front-office head honcho.

Brand, a native of Peekskill, New York, and a two-time NBA All-Star, was hired as Philadelphia’s GM roughly three years after retiring. Rose, formerly the agent of Sixers’ star center Joel Embiid, is familiar with Brand. Despite the close connection and the fact that Brand’s team was on track to make the playoffs for the second consecutive season before this season’s suspension, it’s best Rose let Brand remain in Philly, if not away from the Knicks GM position in general.

For starters, Brand’s contract won’t be up until after the 2020–21 season, meaning the only way to bring him to New York is via trade. Keith Pompey, the Sixers beat reporter for The Philadelphia Inquirer, said that the team is pleased with Brand’s work so far.

Sixers general manger Elton Brand is reportedly a candidate for the #New York #Knicks GM job. However, a Sixers team source noted that Brand is under contract with Philly past this season. The source added the team is very happy with the work he's done as Philly's GM.

Bondy’s source said Rose “wanted to see if Brand was dismissed after the playoffs” so he could hire him this offseason. Should Brand be fired, it would happen after just two seasons with the Sixers despite inheriting two All-Stars under 25 years old and an abundance of draft picks. Such performance wouldn’t signal someone who can turn around a team as hopeless as the Knicks.

Before Brand arrived, the Sixers won 52 games and were eliminated in the second round after a five-year absence from the postseason. The team had bounced back quicker than anyone expected and established itself as one of the Eastern Conference’s heavyweights. With young stars in Embiid and Ben Simmons, Brand needed to find the right supporting cast to put the Sixers over the top.

Acquiring the then-29-year-old Butler indicated the Sixers—built on the shoulders of the under-25 Embiid and Simmons—were playing to win now. Philly had cap flexibility and all of their picks moving forward with multiple second-round picks in each of the next few drafts. Brand had the chance to rebuild slower and more cautiously but decided to accelerate the rebuild by bringing in Butler, who would require a max contract at season’s end.

Additionally, Brand traded away former first-overall pick Markelle Fultz for Jonathan Simmons, a 2019 second-round pick, and a top-20 protected first-round pick in 2020 (which belongs to the Oklahoma City Thunder, who sit just outside the top 20). The veteran Simmons was expected to be a rotation player for Philadelphia but averaged just 7.4 minutes per game in the playoffs.

Philadelphia’s winning percentage after the trade deadline dropped from 62% to 58%. However, it should be noted that the five-man unit of Embiid, Simmons, Butler, Harris and J.J. Redick produced one of the best Net Ratings in their brief time together. Brand also acquired 3-and-D wing James Ennis for just a pick swap.

After pushing the eventual champion Toronto Raptors to seven games—further than any other team had pushed them—Brand did a lousy job retooling the team.

In free agency, Brand didn’t do much better. Butler decided he wanted to go the Miami Heat and Brand obliged, trading him there in exchange for Josh Richardson, a younger but less talented wing. Brand then re-signed Harris on a max contract worth $180 million over five years and signed 33-year-old center Al Horford to a four-year contract worth up to $109 million. He signed several other free agents to small contracts but none of them have been greatly impactful.

Brand’s plan to surround Embiid and Simmons—both weak outside shooters and standing at  7-foot02 and 6-foot-10 tall, respectively—with no guards that are strong ball-handlers and outside shooters has left Philly with a mess of a roster. Their talent has kept them in the playoff picture but the team doesn’t look like the title contender many thought it could be. Harris and Horford haven’t lived up to their contracts, and the team is on pace to win fewer games than their previous two seasons.

At the 2020 trade deadline, with the Sixers in a disappointing sixth place in the Eastern Conference, Brand traded for Alec Burks and Glenn Robinson III while trading away James Ennis. These moves didn’t help the team very much, and the Sixers are now looking towards their first finish outside the top three since making it back to the playoffs in 2018. The team doesn’t have any salary-cap flexibility and a questionable future.

Should Brand become Rose’s right-hand man, he would leave the Sixers in worse shape than he found them. In New York—with no obvious young stars and a glut of ineffective veteran players—Brand’s ability to build a good team would be truly tested. He wouldn’t be able to ride the talent of two young stars leftover from the previous regime; instead, he’d have to build the team up from the very bottom.

Using the records of the teams Brand has managed is disingenuous. The Sixers won 52 games in the season prior to Brand’s arrival, 51 in his first season on the job and were on pace to win 48 in his second season. All Philly has to show for Brand’s moves is less flexibility and four massive contracts for players that mesh like cats and water.

Based on the disappointing job Brand did with a situation much better than New York’s current one, Rose should not offer Brand the Knicks’ GM gig.