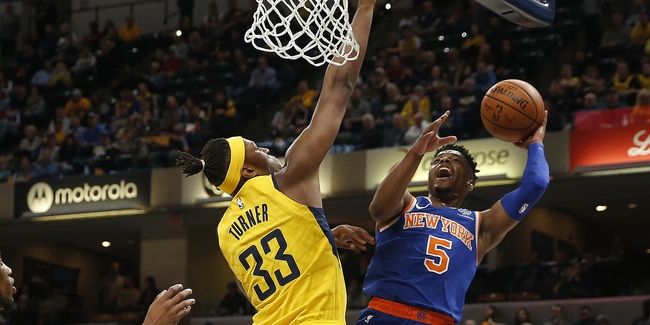 Amid a three-game road trip, the Knicks fell to the Pacers 103-98 in what can only be described as an embarrassing loss.

Days after being publicly challenged by head coach David Fizdale, the New York Knicks (13-55) responded with little to no improvement and another loss in the column, this time against the Indiana Pacers (43-25).

Too little too late, New York only played with noticeable effort in just one half of the game, and subsequently lost by a total score of 103-98.

The Victor Oladipo–less Pacers have now won eight of their last 10 home games. Despite shooting just 28.6 percent from beyond the arc—a result of poor luck rather than tenacious Knicks defense—the Pacers had six different players score over double figures, including their five starters.

New York led by two points after the first quarter, fell behind by three at the half, and the deficit increased from then on. The third quarter was undoubtedly the Knicks’ worst quarter, when Myles Turner and Bojan Bogdanovic hit timely threes to start the second half. New York’s Damyean Dotson struggled, Emmanuel Mudiay is obviously playing for his next contract, and Allonzo Trier had his worst game in quite some time.

New York surged in the fourth quarter and went 17-4 run over the last six and a half minutes. Eventually losing by just five points, the game was significantly worse than the box score suggests.

Nonetheless, here are some key stats from tonight’s game.

In a much needed slump-buster, Kevin Knox attempted fewer than 10 shots and shot over 50 percent for the first time since before the All-Star break. It’s now March 12th. Knox has hit the rookie wall and it’s obvious to all.

The Knicks will likely lose again, but at least Knox found his stroke again tonight.

Averaging just one assist per game, Knox hit his season average against the Pacers. Knox is hitting just 35.9 percent of his shots from the field on 12 attempts per game. Often in catch-and-shoot situations, Knox was able to find his stroke from deep early on and continued to plug away at that move.

Just hours after claiming that the rookie wall doesn’t exist for himself, Trier had the worst and least efficient game from the field he’s had in months. Coincidence? Probably. But who’s to say.

What we do know, is that the ball tends to stick in Trier’s hands once he receives a pass—but he’s been a go-to scorer for the Knicks and that’s been our excuse. Against the Pacers, Trier was just 3-12 from the field and 1-5 from deep. No assists and four turnovers. The ball stuck and eventually hit nothing but rim.

Trier was one of the many reasons why the Knicks lost, and he didn’t help pull the Knicks closer during the 17-4 run. Trier missed two buckets in the final three minutes after replacing Damyean Dotson. Although the game was lost before that last run, Trier again exemplified hero-ball in the worst way.

Since being traded to New York, Smith Jr. has been exciting and disappointing. Smith Jr. has accepted the challenge of becoming the Knicks’ leader, proposed by Coach Fizdale. With four turnovers and four fouls, Emmanuel Mudiay played seven more minutes than Smith and boasts a better stat line too.

With just seven points against the Pacers, Smith Jr. was rendered ineffective by Fizdale, who sadly leaned on Mudiay for help. In 25 minutes of playing time, the neophyte was inefficient from the floor and failed to set up teammates to score. Without a doubt the best passer on the team, DSJ has been averaging 6.4 assists per game over his last 10.

The Knicks are in San Antonio playing DeMar DeRozan for the second and final time this season on Friday. They won a surprise matchup with the Spurs on February 24th.