Mudiay is rapidly losing any shot to be an NBA mainstay. Will the former Denver lotto pick safely play into the plans of David Fizdale and the Knicks?

Emmanuel Mudiay has been on the grind this summer. After his trial run in New York—it would be unfair to consider the 22 games he appeared in anything more than that—his security and place in future plans remain a mystery. There was no real plan when he arrived from Denver. Kristaps Porzingis was already lost for the season. Playoff talk ended in December. Jeff Hornacek’s departure became less of a question and more of a foregone conclusion.

That all changed once David Fizdale was hired. Fiz’s arrival signaled the final step in the new regime. It also started the clock for Mudiay, whose contract is guaranteed through the end of the season. That gives him 82 games to prove he deserves to be part of future plans in some capacity

During his introductory presser, Fizdale went out of his way to assure Mudiay that he has plans for him, too:

Mudiay has responded to the vote of confidence well. He, along with Frank Ntilikina and Damyean Dotson, took a trip up to Boston during the playoffs with Fizdale to get a sense of the atmosphere. Mudiay then joined the other Fiz Kids in Vegas for the Summer League. Even though he did not play, he still practiced and hung around the coaches.

He has also put in work alone:

And put in work with his guys:

These are the signs you want to see from a guy entering a crucial season in his career. When we last talked about Mudiay, we touched on him being able to control his own destiny. Fellow reclamation project Trey Burke has been a prime example of lottery talent figuring it out. The question around Burke has since evolved from whether he would he make the team to whether he will start on opening night.

Mudiay’s role remains hazy, but as mentioned earlier, Fizdale seems determined to get him right. What that truly means is hard to decipher. The problem in Denver was not attention or opportunity. Nuggets head coach Mike Malone and the Nuggets front office were invested in Mudiay until the end. He had every opportunity to be the starting point guard, but ultimately lost out to Jamal Murray. In the aftermath, Mudiay was sent to the bench and became more of a mush than an asset.

Last season, every Nugget had a negative rating when Mudiay was on the court. I’m not kidding, look at this tragedy: 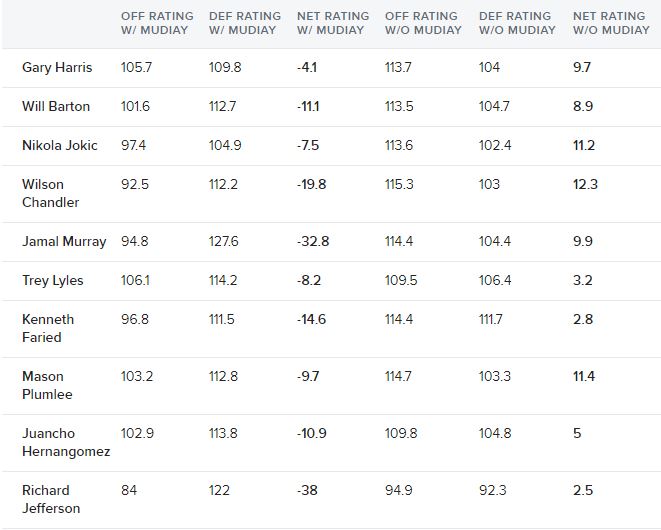 The Mudiay mush traveled to New York where he finished dead last in Net Rating with a grotesque -16.1 in his 22 appearances. Fizdale has been kind enough to include him in the starting point guard competition, but his time in Denver and short-lived time as a starter last season proved that’s not his true calling. He can drop dimes with the best of them, but his tendency to turn the ball over (17.0 turnover percentage for his career) is too glaring to overlook, even for Fizdale and his DJ Khaled-like optimism.

Despite these shortcomings, Mudiay can still become a crucial piece to the puzzle. One thing that stood out during a YouTube rabbit hole of Mudiay highlights was his microwave ability. Both in Denver and New York, he has had spurts where he looks like the king of the court.

In his best game as a Knick, he caught fire immediately against the Warriors. You felt the confidence oozing through the screen in that first quarter. Mudiay finished the first with 14 points and four assists. His flame extinguished soon after that as he went on to score just six more points and notch three more assists for the game.

His hot start was reminiscent of a 24-point first-quarter outburst against the Celtics two years back:

You see the same loose but confident style to him. Coincidentally, he went on to score just six more points in that game too. That tells me he may be better suited as a sprinter versus a long distance runner. His downfall in Denver was the increasing appearances of his greatest faults—turning the ball over and not finishing at the rim. The appearance of these faults could have a direct correlation with how much time he spends on the floor.

A simple remedy could be shorter, more controlled runs of playing time. Some variation of Frank or Trey and Tim Hardaway Jr. will be the starting backcourt opening night. The sixth man role is up for grabs, especially with Courtney Lee being cropped out of the Knicks’ future. That should be the goal Mudiay strives for next season.

Mudiay and the Nuggets may have met each other at the wrong time in their respective lives. That is not the case with the Knicks. His new head coach appears to be his biggest fan. He will have time to iron out his kinks and grow with a core made up mostly of his peers. Scott Perry has made his vision for the foreseeable future clear: the team is in talent acquisition mode, also known as throw as many former lottery picks against the wall and see what sticks. There is no reason Mudiay cannot be one who sticks.