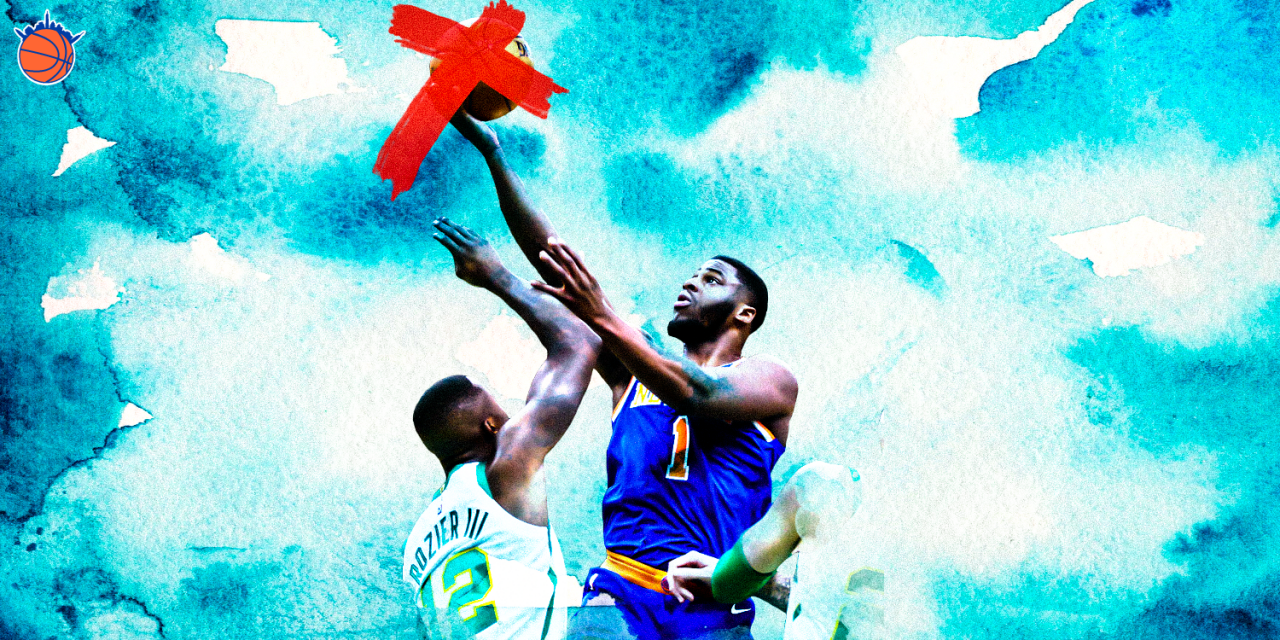 Despite Emmanuel Mudiay’s auspicious December, the point guard has hit a midseason wall. How does he course correct as he nears one year with the Knicks?

Emmanuel Mudiay was on a tear in December. Although the month only amounted to a total of two wins for the New York Knicks, it was the stretch that Mudiay used to prove all of his doubters wrong.

During the last month of 2018, Mudiay averaged 18.6 points on 46.4 percent shooting, 5.5 assists, and 3.1 rebounds. He had never shot a field goal percentage that high in any other season.

It looked like everything was coming up Milhouse for the 6-5 guard, but unfortunately a ruinous return to Denver among a few other uninspiring performances has Mudiay in a bit of slump. So, what’s the next for the fourth-year man who’s finally gained some footing in his career? Picking up the pieces and getting better, of course.

Mudiay has been abysmal close to the basket lately. In his past five games, he’s shooting 42.9 percent on shots fewer than 10 feet from the rim. This statistic should be much kinder to a guard who likes to slash and get himself into the paint.

Whether his aim is to get to the rim for a layup or navigate the defense for a short-range jumper, the key to Mudiay’s resurgence has been getting in close and knocking down shots. He hasn’t done much of that in the new year. Over the last five games, Mudiay is shooting 38 percent overall.

The best course of action for Mudiay is to be choosy when he goes to the rim. He should be utilizing his size to impose on smaller guards. Mudiay has shot 50 percent or better when guarded by Trae Young, Kemba Walker, Jeremy Lin, D.J. Augustin, Collin Sexton, Mike Conley, or Damian Lillard—all of whom are under 6-foot-4. Mudiay is 6-foot-5 with a wingspan greater than 6’7”. It’s no wonder he’s always chosen to get to the hoop—he’s usually bigger than the man defending him. Instead of setting screens and switching onto a big man who can keep, he should try to get his man off balance and roughed up. One step, or one bump could give Emmanuel just the space he needs to get to the rim.

Another factor that would help alleviate this trouble is running this action while Luke Kornet is on the court. With Kornet, the Knicks can run a five-out offense, taking the center out of the paint and leaving it wide open for a slashing Mudiay.

To say that Mudiay excels at getting to the rim would be an overstatement, but he’s able to reach the paint a fair amount of times each game. Capitalizing on those opportunities is imperative, especially when he has such a great size advantage. However, using his natural gifts among taller defenders isn’t the only way Mudiay should be utilizing his offense.

Stop Trying to Be God: Pass the Rock

Too often, Mudiay defers to another ball handler simply because his defender won’t let him drive by himself. His teammates are there, not just to help, but to be a part of the offense just like he is.

Coach Fizdale dubbed Mudiay the best passer on the team, and it shows. Currently, he’s ranked first in assists on the roster, yet only averages 4.6 assists per game—47th among starting guards (per NBA Stats).

Mudiay is simply not optimizing his passing ability. A great way for him to do that is by causing the defense to collapse into the paint with him then kicking out to an open man on the perimeter. He has plenty of these moments with Noah Vonleh. In the following clips, Vonleh executes ideal catch-and-shoot action opened up by the drive perfectly.

Vonleh himself is having a resurgence, and looks to be a three-point shooting big with sustainable numbers. However, he’s not the only running mate Mudiay has on the team.

He could arguably run the same plays with Kornet, the Knicks’ center who’s making a name for himself through effective three-point shooting. Kornet is shooting an incredible 45.2 percent from three on 3.3 attempts per game. Although he’s not much of a post player, he’s not expected to be, and he fits in perfectly with the pick-and-fade play that Mudiay needs when a shot at the rim is unlikely.

Kornet shoots 45.6 percent on catch-and-shoot opportunities, and his three-point field goal percentage skyrockets to 60 percent when it’s on a pass from Mudiay. It’s criminal that Mudiay and Kornet have only spent 162 minutes on the court together this season. This falls more on Fizdale than Mudiay, though.

And passing isn’t simply a Plan B. Working to get his teammates involved should be among the Mudiay’s highest priorities. A Vonleh bailout won’t always be available. Currently, the Knicks are a league-worst in assists per game and are the only team that averages below 20; they’re 30th in field goal percentage as well. This is indicative of a stagnant offense—one that Mudiay currently heads. While the blame can be shared by coach and floor general alike, it’s obvious that Mudiay hasn’t looked to use advantageous positioning to further the team.

Mudiay’s recent slump hasn’t been a complete disaster. The contract-year player should look at it as room to grow that can be completed during the season. Though his confidence has been important to his comeback (Well, it’s more like a “first coming” than anything), Mudiay’s points of attack need to change if he wants to rebound from a lackluster new year. A mid-season tune up and realigning would do both Mudiay and the team a ton of good.