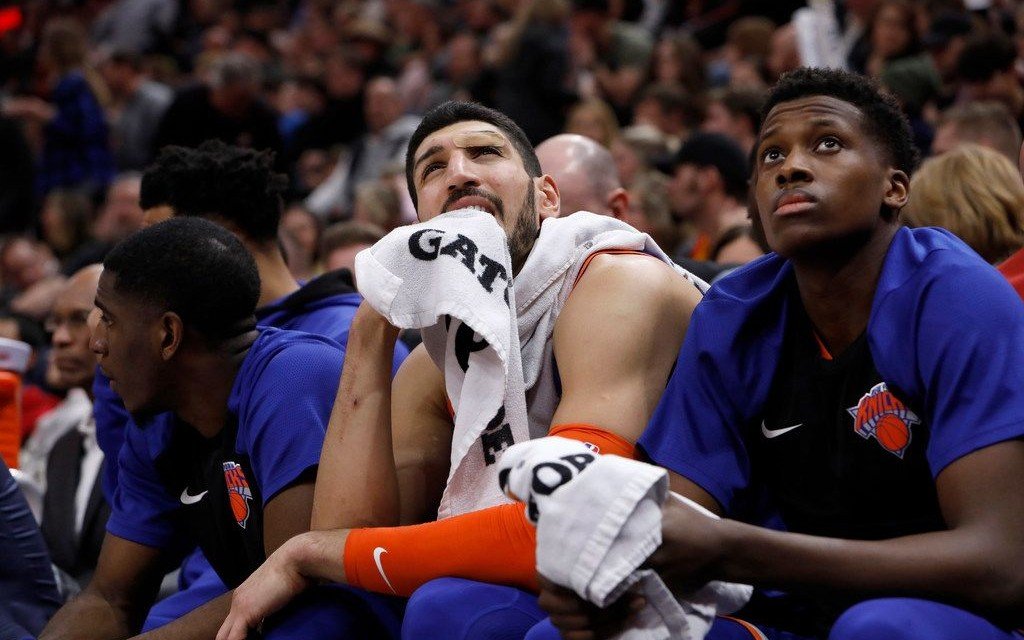 The Knicks’ center Enes Kanter has troublingly lost a grip on his role on the team and his erratic behavior has been detrimental to the young squad.

His recent displeasure had been due to Fizdale’s decision to bench him in favor of Luke Kornet, a center who has spent most of the season in the G League. His disdain was then exacerbated by the Knicks’ embarrassing loss to the Utah Jazz where they once trailed by 46 points.

To Kanter the benching is unfair. This season he’s averaging 14.3 points and 10.6 rebounds on 54.3 percent shooting. He’s among the top 15 players in rebounds per game and is ninth in rebound percentage. With numbers like these, Kanter can’t figure out why he’s been benched. “This is too early in the season to shut me down. My goal is to go out there and try to be an All-Star this year,” he told ESPN.

The fact that he can’t see why he was benched in favor not one, but two, players who have logged fewer than 500 total NBA minutes proves he lacks critical self-awareness.

Generally, his defense is horrid. His defensive field goal percentage, per NBA Stats, is 54.2 percent. Specifically, his pick-and-roll defense is awful enough to warrant Devin Booker roasting him on Twitter.

As good as he is in the post, it’s still not enough to consider him a complete player on offense. Kanter plays a very specific, selfish brand of bully ball. So, like any bully, when he doesn’t get his way—for example, being benched for a less ball-dominant center—he pouts, and it has a demonstrable impact on his game. He tosses up wild shots and his defensive “effort” simply becomes muscling around. As a starter, he averages 2.4 fouls and 1.5 turnovers, but as a reserve, he averages 2.6 fouls and 2.5 turnovers per game. The uptick in fouls is negligible, but the increase in turnovers is indicative of a general carelessness that led to his altercation with the Milwaukee Bucks.

After catching an elbow from a Milwaukee Buck on one side of the court, he dished out a hard foul of his own on Bucks’ frontman Giannis Antetokounmpo and knocked him to the floor. This sparked a heated on-court tiff with an assistant coach purposefully making contact with Kanter.

“He’s not my assistant coach, so he’s not allowed to touch me. You’re a Milwaukee Bucks assistant coach, so you’re allowed to touch the Bucks players, not me,” he commented, per the Daily News. Kanter even declared that Bucks assistant Darvin Ham be fined. Although the NBA declared Ham a “peacekeeping force,” Kanter’s request was within reason; the optics are bad, especially since he was ejected and left the arena with a sinister grin on his face.

After an alarmingly dangerous summer that painted him as a modern day human rights advocate due to a forced exile by the ruler of his home country, Turkey, it appears that Kanter’s next story arc has him turning himself into a villain. His lighthearted beefs, like saying Jared Dudley has a retirement body, have devolved into personal beefs with Antetokounmpo and the modern way of basketball.

Every time he goes to Utah he gets booed. It’s like a baby-faced WWE star making a heel turn into a “bad boy” villain once ratings were down. And ratings are certainly down for Kanter.

Once upon a time, Kanter claimed he wanted to spend the rest of his career in New York. As a man who relentlessly speaks his mind, sometimes to his own detriment, it’s hard to doubt his honesty. However, with his current disdain at the Knicks consistently bad play, it appears that dream keeps getting farther and farther away.

Kanter stated that he doesn’t mind coming off the bench if the result is a win, but the soul-crushing game against the Utah Jazz, where he went scoreless in 17 minutes, is worrisome for all parties involved. Would Rudy Gobert have terrorized the Knicks even worse had Kanter started the game? Would he be the unlikely rim protector the Knicks desperately needed that game?

It’s impossible to say, but what is certain is that the Knicks aren’t doing well, and that doesn’t sit well for the front office or Kanter. Whether the Knicks are able to find a generous trade partner for the 26-year-old is unclear. Reportedly the front office has dipped their feet in the water to see who might be interested, but to no avail. Whatever happens, it seems as though Kanter’s time as a New York Knick ends with this season.