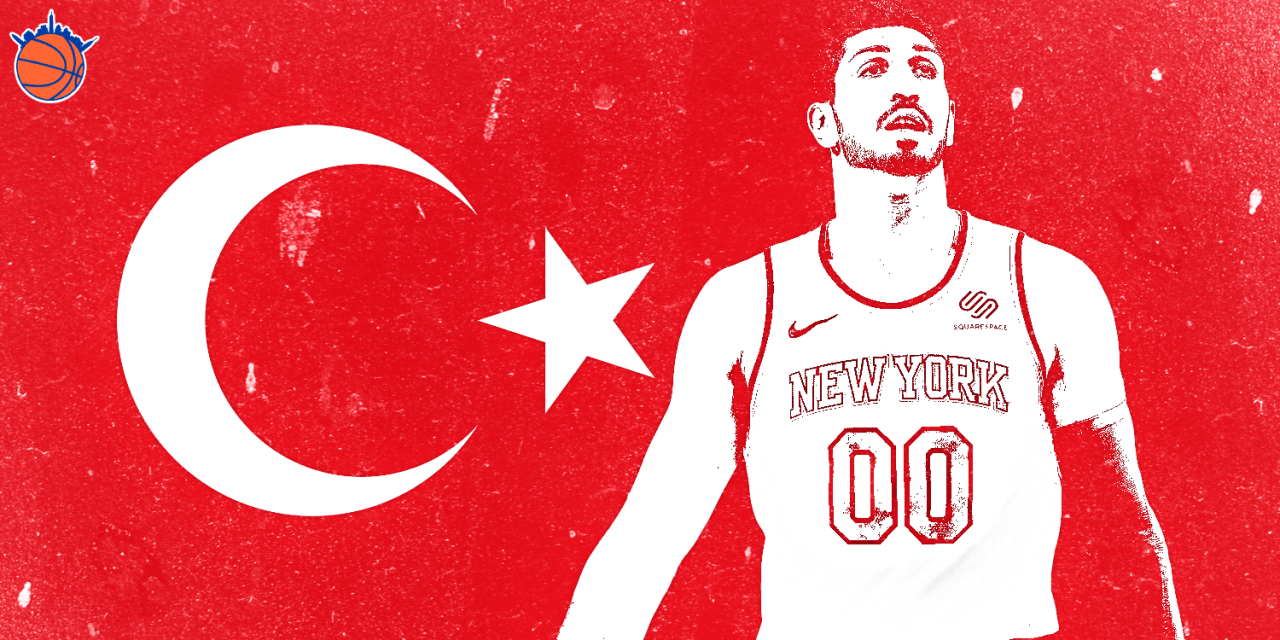 How does Enes Kanter’s recent criticism of Turkish Government compare to other athletes and how can he inspire others to speak out?

One of the most notable off-the-court storylines affecting the Knicks in recent memory is the ongoing rift between Enes Kanter and the current government in his home country, Turkey. Kanter has made it known that he strongly opposes current President Recep Tayyip Erdoğan and his regime—and has been extremely critical and outspoken about the matter.

The 26-year-old’s disdain for the government goes back to 2016, starting with a couple critical tweets and culminating in Kanter losing his Turkish passport in a Romanian airport. It has escalated to a point where it’s affecting Kanter’s basketball life, too—the latest development being his decision to forgo the Knicks’ trip to London this week, citing safety concerns. Enes fears that the government might send someone to kill him, and believes it is better to hang back in America while his team faces the Washington Wizards across the pond.

Kanter has taken to social media and major news outlets like CNN to discuss the plethora of death threats he has received, being disowned by his family, and the revocation of his visa by the Turkish government.

Even fellow Turk and former NBA player Hedo Turkoglu has vocalized his disagreement with Kanter, saying “He is trying to get the limelight with irrational justifications and political remarks”(via Hedo Turkoglu/Twitter).

Despite all the backlash Kanter is receiving from his native land, he refuses to back down and let the corrupt Turkish political climate go unnoticed. Instead, Kanter has used his platform as an NBA player to bring increased awareness to the issue, and advocate for a movement of extreme change in Turkey.

“I’m an NBA player and I have a big platform so I’m trying to use this platform to be the voice of all the innocent people who don’t have a voice … my family is still back in there and they are getting lots of threats too but I have to do this for all those innocent people,” Kanter said. (via NPR)

Kanter is not the first to take advantage of a large following to push for social or political change, as many athletes have recently used their platform to impact landscapes far beyond sports. The meteoric rise of social media combined with the current U.S. political and social climate has enabled more athletes to express their voice on a large scale, prompting many to speak out about various issues such as race relations, LGBTQ rights, police brutality, gun violence, and more.

LeBron James and Colin Kaepernick have been at the forefront of this movement, speaking about issues affecting the nation today. Both James and Kaepernick have been highly critical of President Donald Trump and have utilized many different methods of protest—from on-field demonstration to media appearances—to bring awareness to ongoing racial tension and other institutional issues about which they feel strongly.

Kaepernick’s protest began years ago, when he decided to take a knee on the sidelines of an NFL game, protesting police brutality and racial inequality. He now finds himself without a job in the NFL, and has been passed on in free agency for seemingly less talented quarterbacks who would be less of a “distraction” and come with less “baggage.” He has filed a grievance lawsuit against the NFL, claiming to be blackballed and unfairly unemployed but has still not found work. While settlement talks with the NFL have stalled, a hearing is set for early 2019.

Kaepernick continues to be an inspiration to current NFL players who, to this day, kneel during the National Anthem to get their point across.

Although the consequences for protesting in America are less severe than in Turkey, we see how standing up for political beliefs and advocating for social change publicly as an athletes can easily affect their on-field or on-court careers as we’ve seen with Kaepernick and now we’re seeing with Kanter.

As for LeBron James, his willingness to speak out has actually got to the point where he has exchanged jabs over social media with Donald Trump, who believes LeBron doesn’t have the qualifications to speak on political issues and prefers athletes to not enter the lane of government and social issue talk. LBJ on many different mediums, including Twitter and his TV show, is pushing his narrative and making statements about how he feels about the president and also giving his opinions on issues he cares about. James even chimed in about the battle between the Golden State Warriors and President Trump referring to Trump as a “bum”. The Warriors boycotted the usual White House visit and were subsequently uninvited.

The fact that LeBron is such an icon and plays such an individually driven sport makes him immune to being released and struggling to find work, like we see with Colin Kaepernick. Despite some notable differences in their protests, James has been met with heavy criticism as well and seems to be able to handle it very well and has continued to become more well-versed in topics far beyond the basketball court.

LeBron knows how legendary and iconic of a brand he is, so when he speaks, it is most likely going to be a headline across many news fronts. Recognizing the fact that his voice resonates more than most people in the world, he makes sure to have his voice heard.

Protest has not been limited to younger athletes or athletes of color. Steve Kerr and Gregg Popovich regularly express opinions on politics in interviews, and have never shied away from making their point. Popovich is on record calling the President a “soulless coward” and a “pathological liar” in a 2017 interview with ESPN’s First Take.

A good segment of the population applauds sports figures for using their high-profile stature to speak out on behalf of those whose voices often go unheard.

NBA star @Enes_Kanter hasn’t spoken to his family in years because he’s a vocal opponent of his country’s government — but the NY Knick says sacrifices are necessary to challenge the man he calls ‘the Hitler of our century’ pic.twitter.com/GfVjt7ZU7K

On the other hand, there are plenty of people who don’t care to hear from athletes regarding political issues, and prefer them to “stay in their lane” and “stick to sports.” Often times, athletes lose fans or damage their financial bottom line by making these statements, and even receive hate mail and death threats.

Enes Kanter’s situation is such that he legitimately fears for his life. Even though his basketball career has been partially affected by his desire to speak out against the Turkish government, he hasn’t backed down, and continues to stand by what he believes in.

Many other athletes who face heavy criticism have not backed down and going forward, Enes can be a memorable and motivational figure for those the sports world looking to fight for a cause.

Given the risk and potentially awful consequences for Kanter speaking against the Turkish government, his demonstration of fearlessness and determination to make his voice heard should inspire more athletes to step into an uncomfortable realm and advocate for change.