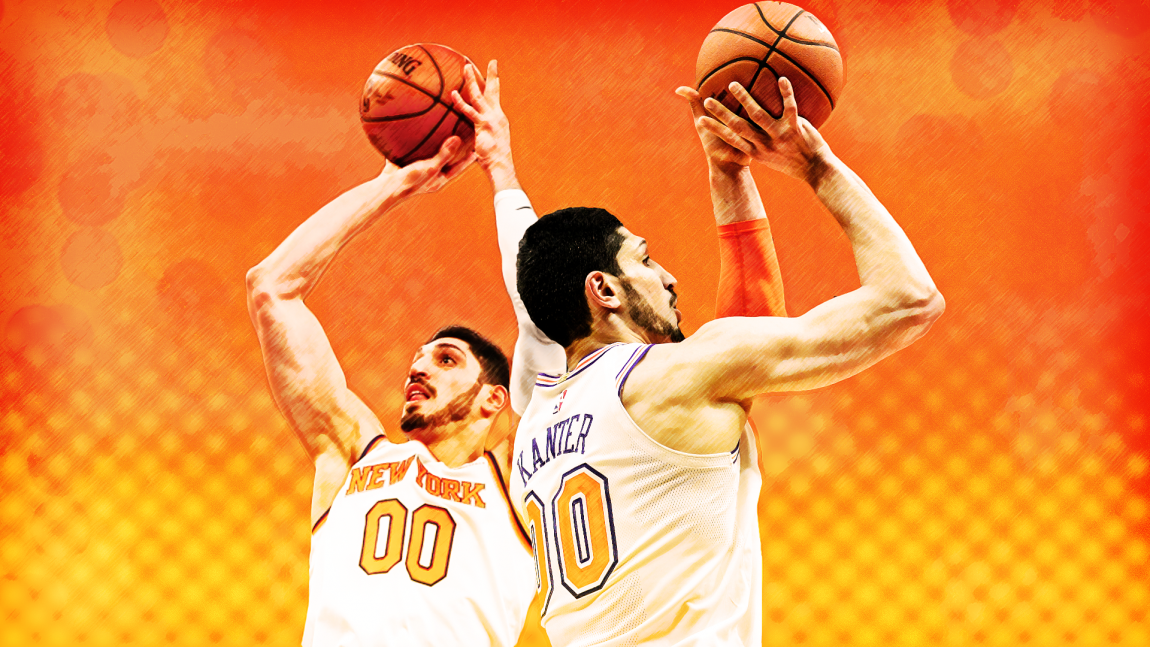 Could a journey beyond the arc be in the cards this year for New York’s starting center?

Enes Kanter is a man of many traits. Instagram timeline flooder. Social activist. Bruiser. Defensive sieve. He wears his sometimes enthusiastic, divisive personality on his sleeve at all times. The Turkish big man does not apologize for what he is as a person or as a basketball player.

Through media events and training camp, there has been loud chatter about Kanter perhaps adding a wrinkle to that well-established identity by attempting long-range shots:

Prior to preseason action, I wasn’t necessarily buying it. Most of the talk before actual basketball begins is just that: talk. Faulty narratives take shape, promises are made that were never intended to be kept, and coach-speak quickly devolves into straight-up fabrication.

Then something funny happened last night:

TWO THREES! Both came from simple pick-and-pop scenarios in which Nets centers Jarrett Allen and Ed Davis respectively had no interest in hopping out to contest Kanter’s bomb from deep. After failing to chuck one up from deep in New York’s first preseason contest against the Wizards, Kanter made good on his offseason proclamation and let it fly against Brooklyn.

During his first season in New York, Kanter took two threes all season, and missed both. The first attempt took place in the Knicks’ premiere contest last season, and the only reason he somewhat reluctantly attempted the shot was because every single member of the Thunder regarded him as if he had the bubonic plague:

The other, if you remember, came in December against the Chicago Bulls. On a broken inbounds play, Kanter had an opportunity at the top of the key to tie the game in the waning moments. It didn’t go well. This exact moment marks the last time in nearly 10 months that the Knicks were above .500. This loss dropped them to 17-17, and they would never creep above average for the rest of the year. Your 2017–18 Knicks, ladies and gentleman.

This isn’t about last year’s Knicks though. It’s about Kanter. He was a non-factor from deep last season. The declarations by both he and David Fizdale prior to Monday’s preseason debut was enough to make us think those three-point attempts might tick up this season. Now we have a speck of evidence from which we can extrapolate that threes could end up being a legitimate part of his game.

Kanter’s career high for three-point attempts in a season is 45, which he set during the 2014–15 campaign that he split between the Jazz and the Thunder. 41 of those came before he was shipped off to Oklahoma City, each attempt a product of some wonky lineups trotted out by rookie head coach Quin Snyder. 49 games in Utah led to 41 three-pointers attempted. Over the other 467 games that Kanter has logged in the NBA, he’s taken 68 threes. It’s fair to say that half-season was a bit of an outlier.

The center shot a decidedly-average 32 percent while in Utah, canning 13 of those 41 triples. Kanter was a net negative for the Jazz before the trade deadline, playing the majority of his minutes at power forward next to the likes of Derrick Favors and Rudy Gobert. Snyder and the Jazz have both come a long way since these three were the preferred frontcourt options in Salt Lake City.

As a shooting asset for Utah, Kanter’s favorite area to fire from was the corners. 31 of his 41 attempts were corner threes, and often came as a result of penetration kick-outs by the likes of Trey Burke and Gordon Hayward. Burke set Kanter up for 12 of those three-pointers, with Kanter knocking down five of them. A small sample size, to be sure, but promising nonetheless considering that Burke and Kanter will spend plenty of time together this season as New York’s supposed starters.

Those 10 remaining attempts to complete Kanter’s array of triples came from the top of the key, the favorite spot of sorely missed All-Star Kristaps Porzingis. Could the Knicks line up Kanter to essentially play the role of Porzingis with certain actions?

Take another look at the Nets play back-to-back with this play from 2014 and let me know if you see any similarities.

That’s the same damn play. Kanter sets a screen in the second action, but the endgame is the same. Burke drives, the defense collapses in, and Kanter is set up for the wide open triple. The only difference is Burke gets fancy and goes behind the back in the clip from this season. When you have Allen Iverson cornrows, style points count.

This set has already been a part of an NBA offense that both of these dudes participated in. If this iteration of Kanter continues, sets like these are simple to pull off against teams that deploy a conservative pick-and-roll defensive style for their big men. Any easy play for David Fizdale to have in his back pocket in the right scenario will help this roster coalesce more rapidly.

Before he was a Knick, back with the Thunder in 2016–17, Kanter wound up for three 38 times and made just five. The vast majority of these attempts came when he played alongside Steven Adams, in yet another lineup that featured Kanter at the power forward position. I remain baffled as to why Kanter was ever cast in this role, but it was a thing that happened. The location of his attempts were more evenly split than in Utah, with nearly a 50-50 share coming from above the break compared to the corners. For a big man, Kanter spent more time on the corners than Bodie and Poot, allowing Steven Adams to be the roll man:

Here’s the thing: There aren’t many Knicks lineups that will allow Kanter to hang out in the corners like this. It’s possible that New York’s starting unit could have Kevin Knox as a screener and allow him to dip into the paint with Kanter flanked out to the side, but it seems unlikely that the Knicks will ask Knox to do that. Knox rolled out of a screen on exactly one possession last season at Kentucky. He played the role of spot-up guy on 204 possessions. Knox’s offensive versatility is exciting, but asking him to perform this specific duty as a rookie won’t be a priority.

The same goes for Lance Thomas, who spends the majority of his time waiting for the offense to operate around him. Aside from Thomas’ spot-up shooting and the occasional cut on offense, he’s not providing the Knicks with much in terms of nuanced scoring. There simply isn’t a clear avenue for Enes to spot up if he spends most of his time with New York’s starting unit. Most of the time, he’ll need to be the guy bumping in the paint and diving hard on screens.

Pick-and-pop is where his three-point bread will be buttered. Defenses will not want to venture out 24 feet to prevent a Kanter triple—they’ll sit back and let him fire. Teams will expect Kanter to crash the paint hard after he sets a pick, which leaves open the pop option. In all likelihood, David Fizdale will encourage this from Kanter on an infrequent basis. After all, we’ve seen him do it before.

Fiz was an assistant coach with the Miami Heat when Chris Bosh became a lethal weapon from three. The Grizzlies shot threes at one of the lowest frequencies in the NBA prior to his arrival, yet promptly finished smack in the middle during his full season at the helm. Fizdale also played a role in the complete overhaul of Marc Gasol’s shot profile as Gasol went from three attempts from deep in the 2015–16 season to a whopping 268 the next year.

Marc Gasol and Enes Kanter could not be more different in the sheer makeup of their games. Gasol made his name as a strong defensive presence, the last line of defense in a long run of elite Memphis defensive units. Kanter has laid his NBA claim as a strong, physical, offensive-minded player that never cared much for rejecting the opposition’s attacks at the rim. Comparisons between the two are difficult to unearth.

The difference in turning Gasol into a world-beater from three and asking the same from Kanter is that Gasol was already shooting a bunch of midrange jumpers. He essentially turned some of those 16-footers he was taking and turned them into threes, which is a clear improvement. Just ask ‘Melo.

Enes Kanter doesn’t have those midrange attempts to convert. Gasol was taking 75 percent of his shots in the mid-range in 2015-16, ranking in the 97th percentile among big men. Kanter, for his part, took 33 percent of his total shot attempts form the mid-range last year, a 56th percentile share. That difference is stark, and would require a drastic shift in Kanter’s game. I don’t see that happening.

Despite that, we could see Kanter set a new career high in three-point attempts this season. It wouldn’t take much. Opposing centers by nature will not want to guard Kanter that far from the hoop, and that is where he can take advantage. The Knicks could use some more spacing on the floor without Kristaps Porzingis in the fold. If Kanter ends up attempting even one three-pointer per game, plenty of lineup choices could open up for Fizdale, some including Kanter and Mitchell Robinson together on the floor. Those aren’t units I would recommend, but hey, I’m not the charismatic ball of energy with the Rivers Cuomo glasses that roams the New York sideline.

In a lost season from the jump, allowing Kanter to stretch himself out is not costing the Knicks anything. Floor spacing always comes with high marks. The Knicks will still need Kanter to gobble up offensive rebounds and bully fools on the block, and he’ll have every opportunity to do so. But giving him the chance to go on an adventure for a couple sets per game and improving his shot profile in the process could be beneficial for all parties involved.