Evaluating the Past 10 Years of Knicks Coaching 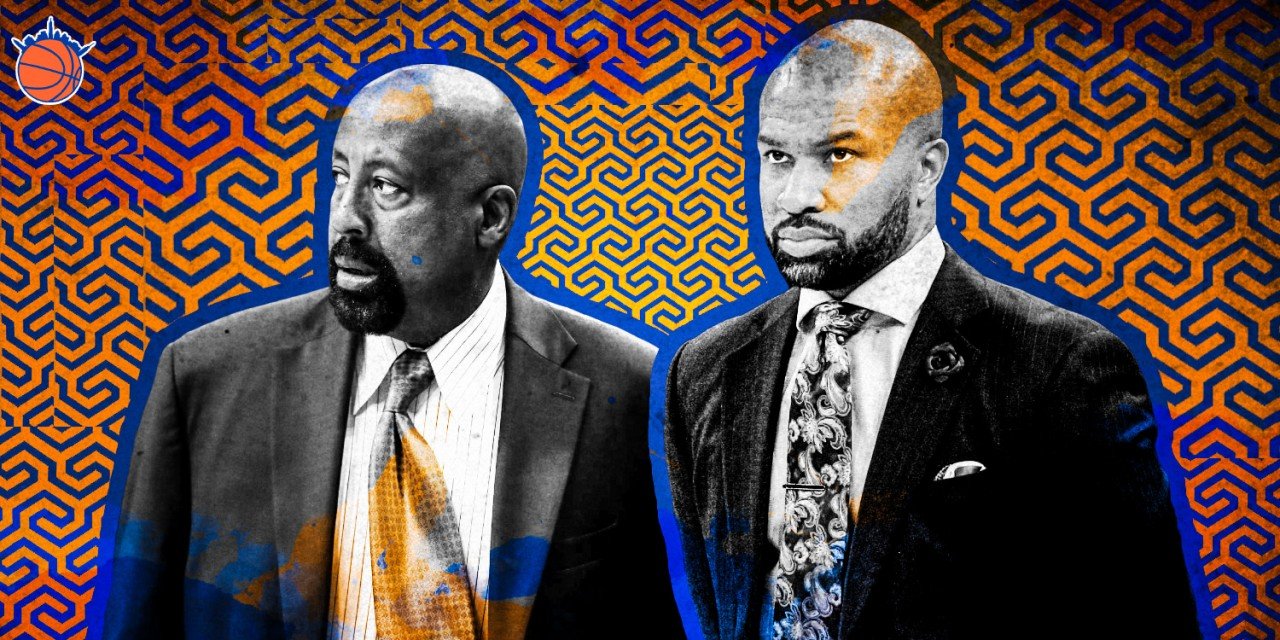 From Mike D’Antoni to David Fizdale, if the Knicks’ coaches the last decade have one thing in common, it may be meddling executives.

The post–Patrick Ewing Knicks have had a penchant for failing. From the front office to individual players, it’s been nothing but disappointment after disappointment.

Often the first person to get blamed is the coach. Were these coaches set up to fail? How many were fired too early? Were there any coaches the Knicks should have fired earlier or not even hired?

Let’s study each coach’s situation since 2008.

D’Antoni is one of the most important coaches in the modern era. The Phoenix Suns were a thrilling team to watch during the Nash-Stoudemire days—but those days had passed, and so had the coach’s patience with Phoenix’s front office and failing in the playoffs. A shiny, new opportunity presented itself in the greatest arena in basketball—an opportunity that D’Antoni went on to regret.

It was not the right situation for him. The Knicks’ roster couldn’t compete no matter who was the coach during D’Antoni’s time in the Big Apple. Remember when Chris Duhon led the Knicks in minutes for an entire season? That’s how bad things were. The roster handed to D’Antoni was too young and incompetent to compete.

Re-visiting Knicks history in the 2000’s is a trip only meant for a masochist.

There were a few good stretches with from 2008–12: the first half of the 2010–11 season when STAT looked like an MVP candidate, Linsanity, and making the playoffs in 2011—which had been the Knicks’ first trip since 2004.

Those good times were seldom and short-lived. It was mostly typical Knicks suffering: the Knicks were swept by the Boston Celtics in their only playoff berth in this time; Lin signed with the Rockets; Duhon never materialized; the players that D’Antoni worked on developing were traded for Carmelo Anthony halfway through a season; Stoudemire couldn’t stay healthy; and the new star, Anthony, refused to play the way D’Antoni wanted.

D’Antoni is a great coach and one of the most important influences on recent developments in the league over the past five-to-10 years, yet it was the right decision to let him walk. The Suns had set a clear blueprint for how the current Rockets head coach wanted to run a team, whereas the Knicks went after passing-reluctant stars Carmelo Anthony and Amare Stoudemire while letting the only guy who could effectively run his system walk during free agency.

An iconic mustache is replaced with an iconic goatee. Sorry.

Woodson impressed the front office by succeeding as the interim coach after D’Antoni left. The Knicks went 18-6 to end the 2011–12 season, made the playoffs, and won a game! Things were looking good for the future, but who would coach? Very competent and cool general manager, Glen Grunwald, did what every good front-office executive does: only interview one person!

Despite Grunwald’s idiocy, that feeling of hope wasn’t just a tease. The Knicks were awesome in the 2012–13 season. Anthony and J.R. Smith had the best season of their careers, with the former an MVP runner-up and scoring champ and the latter Sixth Man of the Year. The roster was comprised of excellent veterans (Jason Kidd, Tyson Chandler, Pablo Prigioni, Rasheed Wallace, and Steve Novak) and good role players (Smith, Raymond Felton—he was pretty good, shut up—Chris Copeland, and Iman Shumpert) around one superstar; Carmelo Anthony.

This was the best Knicks team of the past decade, and the only good team fans aged 25-and-under remember.

Unfortunately, as the playoffs started, the age of the veteran cast began to show as they could not handle the grind of the NBA postseason. Anthony carried the team through Boston (averaging 29.2 points per game). The Indiana Pacers looked like a formable threat, but one that could be overcome. They weren’t. Roy Hibbert blocked an easy dunk from the Knicks’ best player that set the franchise back into a meaningless fugue. A chance at LeBron James and the Miami Heat was quickly erased. The good times had run out.

Next season, Anthony continued to shine, but the rest of the Knicks failed to support their star. Woodson showed ineptitude, watching mouth agape as Smith chucked three after three; he never corrected Stoudemire and Anthony as they counted down the seconds until they could stop pretending to try on defense. Offense was made up ‘Melo iso’s and … that’s about it. As his supporting cast failed to put the ball through the basket, Anthony decided to handle that side of the floor all on his own while Woodson watched and said nothing. After having the second best record in the Eastern Conference the year prior, the Knicks went 37-45, didn’t make the playoffs, and were out on another head coach.

Firing Woodson was absolutely the right move. Though veterans like Kidd were able to unite and play organized ball the year before, when the older players left, Woodson failed stupendously, ruining a year of Carmelo’s prime.

Yeah, remember him? Did he even have an interview?

Fisher’s first year was the most depressing season of the past 10 years. Phil Jackson was in charge and brought in the young, exciting choice of Fisher for head coach. Anthony signed his five-year, $124 million contract extension that summer, so the one player who truly mattered from the season before was locked up indefinitely.

First, Anthony got hurt and missed 42 games. Then, Jackson traded the two shooting guards for … Lance Thomas? Tim Hardaway Jr. couldn’t lead the offense while all of the other offensive weapons were gone or injured. This was a starting lineup at one point in the 2014–15 season:

It’s easy to see why this team failed. Jackson did not like the current players, so he designed the team to fail in order to get a high draft pick. The Knicks had only 17 wins this season, tied for the lowest winning season in New York’s history.

It’s difficult to blame a coach for not succeeding with that much roster turnover, but luckily Fisher’s contract was for three years. In the 2015–16 season, Anthony was still an All-Star, Robin Lopez was a great defender and developed his offensive game, Kristaps Porzingis produced instantly, and some of the younger players acquired during the prior two seasons showed development.

Yet Fisher’s strange, late-game lineups and lack of offensive strategy led the ‘Bockers back into the lottery—except they didn’t have a pick this time. Thanks Grunwald!

Even with all that failure, the biggest issue with Fisher was off the court. During his tenure with New York, Fisher publicly fought then-current player Matt Barnes after the head coach started dating the Warriors player’s ex-wife. Reports also came out that Fisher would hit on his own team’s players’ significant others.

Not a single player defended Fisher after he was fired midseason.

Firing Fisher was another easy decision, although it probably should have waited until the end of the 2015–16 season.

Hornacek was a surprise hire. Knicks fans loved it because, well, he isn’t Kurt Rambis. The Suns fired him after failing to bring their terrible roster to the playoffs in the brutal Western Conference. This hiring was an inspiration, since it was seemingly a movement away from the Phil Jackson sphere of influence at a time when it appeared the only coaches the Knicks were going to get were the Hall of Fame coach’s friends.

It was an exciting time. Porzingis came off an amazing rookie season, Derrick Rose and Carmelo Anthony were battered but hungry for success, and Knicks’ fans were hoping for a 2011 Dirk-esque run from Anthony to bring the doomed franchise a hopefully meaningful playoff run.

None of these things happened. The two-year Hornacek period was not a departure from the drama that existed during the Fisher period: Rose went M.I.A. in the middle of the season, Jackson publicly criticized the best player frequently, Porzingis skipped his exit interview, Joakim Noah was terrible and locked into a $150 million contract, players publicly criticized their coach, and by January, the Knicks weren’t even in the playoff picture anymore. That was all in the first year.

During his second year, Hornacek fought with Noah, which led the highest paid player on the roster to not even show up to practice.

Why don’t players want to come to New York? I don’t get it.

A lasting memory from that season was 34-year-old Jarrett Jack playing consistent minutes while rookie Frank Ntilikina was subbed out every time he messed up.

Post-firing, Hornacek claimed that he was never able to implement the system that he wanted to due to Jackson forcing the team to run the Triangle. Hornacek never had clear control over anything outside individual plays. While he shouldn’t get the brunt of the blame, (a terrible owner, callous president, and foolish GM all deserve it more) Hornacek did not improve this team, and most likely influenced Porzingis’ negative opinion about New York, ultimately forcing a trade.

When he took over as GM and hired David Fizdale as head coach, Scott Perry promised hope and a future to a fanbase that doesn’t know how to give up. The Knicks were finally committing to a plan: tank and develop young players.

The majority of the roster Coach Fizdale inherited was under 25 years old. The best player on that roster was out for at least half the season.

Fizdale has not shown a lot of promise when it comes to both play style and winning, but who could win with the roster of the 2018–19 New York Knicks? One major positive is that players clearly love playing for him. Earlier in the season, there was an effort that hadn’t been seen on the Garden’s floor since the 54-win team of 2012–13. That admiration goes both ways. Fizdale often praises players, which is a huge step away from the Jackson era, when the team’s president openly mocked that team’s best player.

Although fans will need to see more out of Fizdale this upcoming season, it was a good hire at the time—and right now he at least has one aspect of coaching down in connecting with his players.

Asking if the Knicks made the right decision is often a rhetorical question. The problem often wasn’t with with the coaches, but rather with the front office. Isiah Thomas, Donnie Walsh, Glen Grunwald, Steve Mills, and Phil Jackson were all terrible. Mills is still in the front office, but Perry is supposedly the man in charge now.

Perry claims to be a man who can see further than the end of his contract, but Knicks’ fans have been hurt over and over again. The current front office tandem of Perry and Fizdale will need to remain consistent to finally turn the Knicks back into a successful team that players want to play for.

Let’s hope that these two have learned from the failures of the past, and can match coaching style with the right supporting cast.

»READ: Are the Knicks bad at development or drafting?

»READ: Should it matter the Knicks practice all the way out in Westchester?