Evan Fournier Is a Knick. What Does It All Mean? 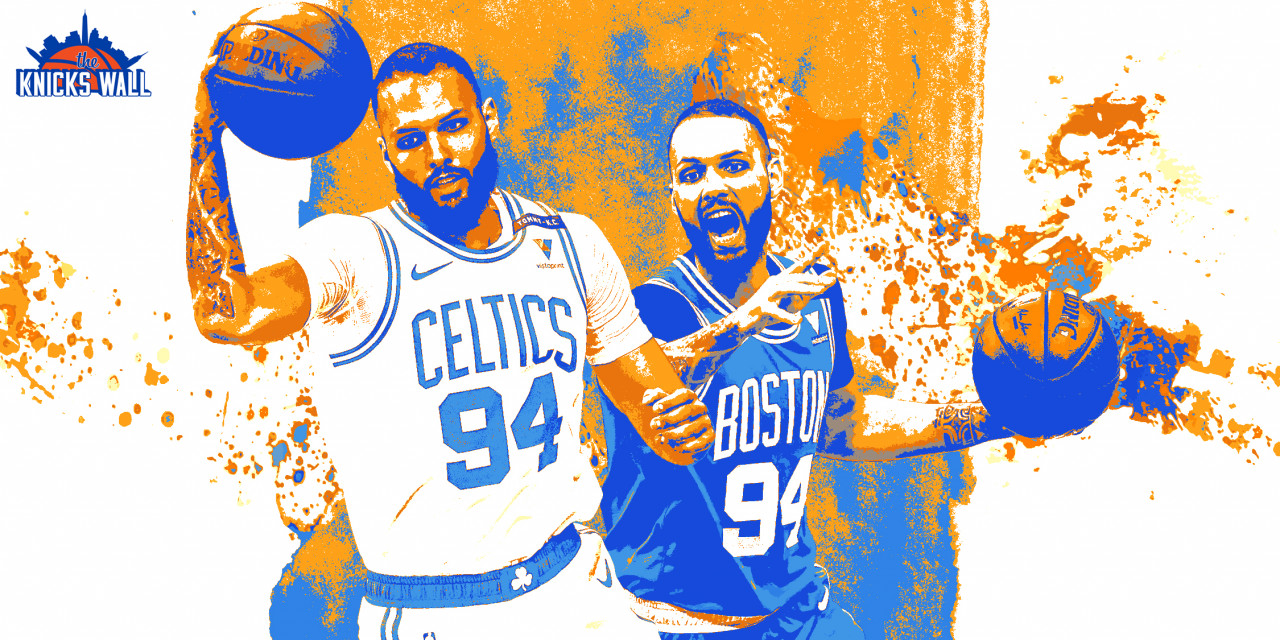 Evan Fournier was a curious top expense during NBA free agency for the Knicks, and there are several cascading effects from the signing.

After coming out of the gates firing, giving a combined $62 million over three years to Alec Burks and Nerlens Noel, the New York Knicks then made their big splash of the summer: a four-year deal worth up to $78 million, with a team option in year four.

And with that, the team basically wrapped up their business. A minimum deal to Taj Gibson completed the “run it back” ethos. With a few lingering dollars, there’s still room for another move or two, but it seems unlikely that there is anything major left to do for Leon Rose and Scott Perry.

Who is Fournier, why did they want him so urgently, and what does it mean for the team?

Evan Fournier is a 6’7″ shooting guard who will be 29 when the season starts. While his shooting numbers have fluctuated a bit, he’s a legitimate floor-spacer, who can spot up, pull up, and is good at navigating off-ball to free himself for movement threes.

Fournier is just a totally different caliber shooter than the Celtics have had in their supporting cast over the last couple of years. Not at all limited to just spot ups. pic.twitter.com/ozz44EkqDp

He’s not bursty, but he’s got a solid handle and can free himself for step-back or side-step shots off the dribble, and he is decent at getting to the rim. Fournier has the creativity and touch to get wrong-footed or start-stop layups off around good defenders, though he struggles with length and athleticism, and has a nice floater in his arsenal that he deploys when needed.

This versatility offensively is the main reason the Knicks targeted him, as their desire for shot-creating guards is pretty obvious at this point, between deals for Burks and Derrick Rose and the targeting of Deuce McBride and Quentin Grimes in the draft.

Fournier gives the Knicks a shot creator to complement Julius Randle in the starting lineup and a spacer to open lanes for everyone else.

Now, there’s a caveat here: it’s important to remember that Fournier-led offenses have historically been middling to downright awful. That’s not entirely, or even primarily, his fault, as the Magic were an abject dumpster fire for almost all of his tenure there, but we have a pretty proven track record of Fournier not being able to helm a top offense if he’s asked to consistently be the primary shot-creator.

For the Knicks, Randle is the primary option, of course, but what the Hawks exposed in the playoffs was that he desperately needs someone to co-pilot that responsibility. For Fournier to be up to the task, he’s going to need to show a level of consistency that he’s never really shown in that role. That’s not to say he can’t do it. After all, the depth of creation ability behind him and Randle is streets ahead of who he was playing alongside in Orlando. Immanuel Quickley, Rose, R.J. Barrett, as well as any of McBride/Grimes/Luca Vildoza (if any of them play) should all be able to ease the burden a bit. But as the highest-paid player on the roster, he’s going to need to step up now like never before.

The other appeal of Fournier offensively is his ability to function as a secondary playmaker. He lacks the speed to be a true advantage creator, especially in the pick-and-roll, where he doesn’t have the first step to beat his man consistently, but he makes up for it in two ways: his ability to keep a defender on his back and his ability to make quick reads to take advantage of shifting defenses.

Over the last three seasons, Fournier has posted an assist rate of 17%, while shooting 38% from three. While 17% isn’t anywhere close to point guard numbers (for reference, Jamal Murray, a point guard who plays a lot of off-ball action, had an assist percentage of 22% in the same span, and D’Angelo Russell was 37.7%), it’s still not too shabby for a shooting guard.

In fact, in that same time span, the only other shooting guards who have combined that level of playmaking and shooting are Zach LaVine, C.J. McCollum, Donovan Mitchell, Bogdan Bogdanovic, and then quasi-point guards Shai Gilgeous-Alexander, Collin Sexton, Fred VanVleet, Shake Milton, and Terry Rozier (per stathead.com). That’s a pretty solid list!

When you break down his offensive attributes, you get something like this:

Now, when we get to the defensive end, it’s a bit of a different story.

It’s not that Fournier doesn’t try on defense. He (usually) does! Fournier is nothing if not a competitor, and he does his best to fight through screens, digs into his man in one-on-one situations, and is generally communicative on switches.

But between his lack of foot speed, which is only getting worse as he approaches 30, and how often he gets lost off-ball, the defense can be rough, despite his best efforts. Fournier pretty routinely finds himself out of position and has to call out for a teammate to switch in order to bail him out of leaving his man wide open. Breakdowns like this happen far too often for a smart, veteran player.

On-ball, the issues are less focus/gameplan related and more pure physical limitations. You’ll notice that all the clips I’m including are from the same game, so it’s worth mentioning that Fournier contracted COVID-19 in April of last season and was still suffering from some side effects in May when this game took place. So while there are several clips of Fournier being absolutely toasted off the dribble by Duncan Robinson, I’m choosing not to include them, in the name of empathy, but rest assured, even pre-COVID, Fournier being blown by pretty regularly, even by guys who are not the fleetest of foot.

On the whole, I think Fournier’s defensive shortcomings are slightly overstated, but the drop-off from a guy like Reggie Bullock, who’s not elite, but still very good, is going to be dramatic.

This also triggers another domino that will interesting to monitor:

Throughout last season, Tom Thibodeau put Bullock, who agreed to sign with the Mavericks, on the toughest wing assignment time and time again, which allowed Barrett the easier assignment. That will no longer be the case. Barrett is now the wing stopper, for better or worse.

I tend to think that’s a good thing. Barrett is a good defender, and forcing him into this position will hopefully make him take a leap, utilize his strength, and step up in terms of his responsibility to maintaining the defensive scheme. For him to reach his ceiling as a two-way wing, his ability to rise to this change in roles will be critical.

R.J. Barrett’s role on offense will be interesting to monitor as well. My hope was that after last year, the rising third-year wing could take a major leap in terms of usage/offensive responsibility. He’s a good playmaker and the possibilities of a Barrett/Randle inverted pick-and-roll (where either player could be the screener or ball handler) were endless. But with the addition of Fournier, it seems more likely that Barrett will stay in a similar role as last season, spotting up, attacking shifting defenses off of close-outs, and in general, being an opportunist.

If Barrett can supplant Fournier in the hierarchy, I’ll like this signing a lot more than if it’s the other way around. While Barrett may not be as effective a shot-creator for himself, he would allow Fournier to play within himself while still growing in the way the Knicks need him to if they have any hope of becoming a true playoff threat during Randle’s tenure.

The last domino to fall will be the point guard spot. As mentioned before, the Knicks still have a little wiggle room, depending on what they do with Vildoza, Knox, and the manner in which Derrick Rose is re-signed. The answer that seems to make the most sense is to have Quickley man the spot. An elite shot-creator for himself, having three playmakers in Randle, Barrett and Fournier would lessen the need for him to become a “floor general” and allow him to bomb from deep, open up driving lanes for everyone, and inject the starting lineup with some much-needed energy.

But it’s the Knicks and things rarely go as we expect. Rose could be the starter, with Quickley coming in…quickly…to spell him, but he’s said in the past he feels more comfortable coming off the bench, and I’m genuinely not sure Thibs can be trusted to maintain a minutes limit if he starts Rose. Thibs could also go really crazy and insert Vildoza or McBride, though both options are rather unlikely, given the guard glut on the roster. In fact, it’s unlikely either Vildoza or McBride get any real minutes early on, barring injuries or unforeseen moves.

Which brings us back to the presumed starting lineup of Quickley, Fournier, Barrett, Randle, and Mitchell Robinson. That team represents a solid mix of offense and defense, but the big question is: will it be enough to improve substantially in a revamped Eastern Conference?

This season will be a battle between development and regression. Indulge a brief moment of pessimism here: it’s incredibly unlikely that Rose shoots 40% from three for the Knicks again, given that prior to last year, he’d only shot above 34% once in his career. Likewise, while Burks is a proven shooter, he probably won’t be a top-10 pull-up shooter in the league this year. Randle is unlikely to hit every single mid-range shot he takes, and the question of if regression will come for his or Barrett’s three-point percentage is very real and very scary.

Development from Quickley into a bona fide starter and Barrett into a true blue-chip player is going to be crucial to offset those regressions if and when they happen. Fournier gives them more wiggle room, of course, but there is going to need to be real and noticeable leaps from every young player on the roster, plus Randle. Obi Toppin will need to become a serviceable shooter, so the Knicks can try to have minutes where Randle plays beside a stretch big. Randle will need to get to the line more and stop relying on a borderline-impossible diet of pull-up mid-range fadeaways.

And if they can get something from the rookies? Well, that’s just found money.

But let’s get back to the man of the hour to wrap this piece up. If you were to ask me to describe Fournier in a word, that word would be: “Solid.”

Fournier isn’t elite. He’s not a franchise-changing addition. He’s a slightly-to-solidly above-average starting shooting guard. While it may not have been my idea of a splashy signing, there’s something to adding a solid player and continuing the team’s path to relevance—one competent season at a time.

So don’t expect a savior, Knicks fans, and you won’t be disappointed. Fournier is going to be a positive player on this team, but if the Knicks want to keep up with the team’s rapidly improving around them (the Heat, Pacers, Hawks, Hornets, Bulls, and Wizards all got better this offseason and are likely to be jostling with the Knicks for position for the final two-to-three playoff spots), the leaps will still have to come from within.

If that seems like a down note, let me leave you on a note of excitement: