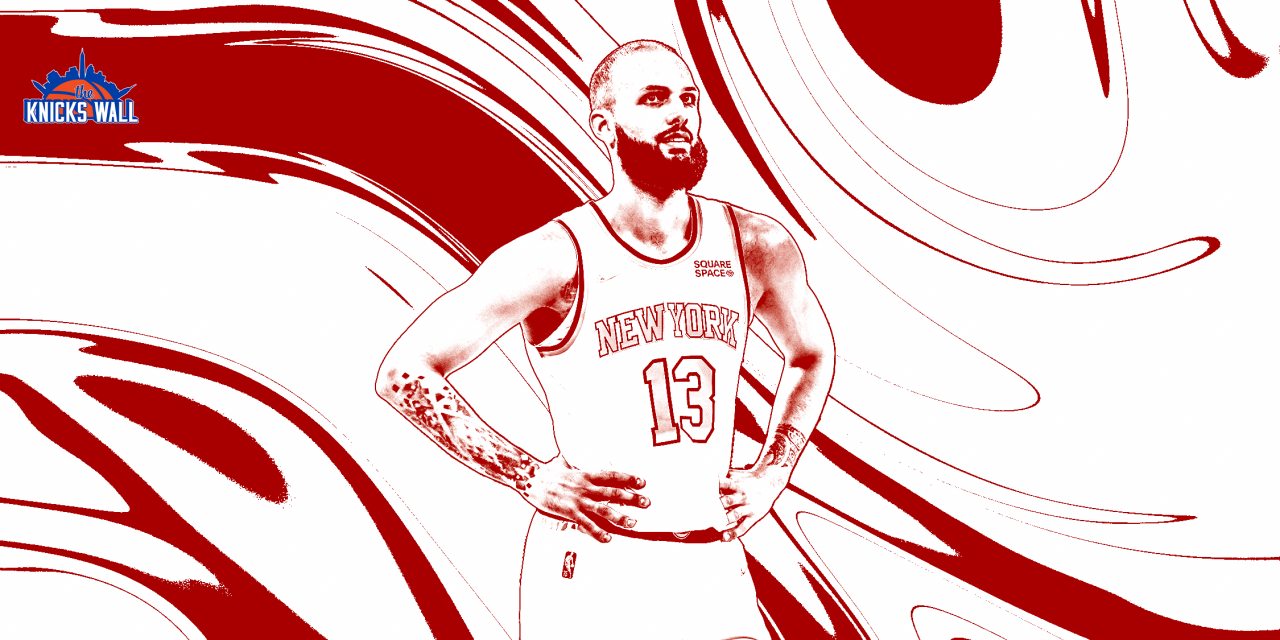 Evan Fournier is coming off an up-and-down season for a Knicks team looking to clear salary. Who are some trade partners for the Frenchman?

In the 2021 offseason, the Knicks spent the lion’s share of their cap space on Evan Fournier, whom they signed to a four-year deal worth $78 million, including a fourth-year team option. Fournier was, back then, fresh off a career-best start to his 2020-2021 season with the Orlando Magic, averaging 19.7 points and 2.9 assists over 26 games before being traded to the Celtics near the deadline.

From New York’s perspective, the rationale for adding Fournier was simple: his skillset addressed two of its most glaring weaknesses at the time: shot-creating and playmaking. So, a Fournier-Knicks marriage made sense in theory.

The key words, there, being “in theory.” In reality, it was an absolute rollercoaster ride. Fournier’s stint in the Big Apple epitomized the phrase feast or famine.

Fournier shot the three-ball incredibly well for the Knicks. He paced the ‘Bockers in three-point attempts (7.7 per game) and finished second in three-point field goal percentage among all Knicks who hoisted 100 or more treys. He even eclipsed John Stark’s longstanding franchise record for most threes made in a season.

With that said, Fournier’s defensive miscues (Knicks allowed 6.4 more points per 100 possessions with him on the floor, good for 8th percentile) and inconsistent playmaking (50th percentile in assist to usage rate) arguably overshadowed his long-range shooting heroics. His play didn’t consistently translate to winning basketball.

Couple this with the fact that Andy Larsen of the Salt Lake Tribune reported Fournier is likelier to go to the Jazz in a Donovan Mitchell trade than Julius Randle and Fournier’s days on the Knicks appear numbered.

The writing seems to be on the wall for Fournier’s career in New York. However, he can still plug the hole of perimeter shooting on a team elsewhere, whether he ends up as a piece of a larger Donovan Mitchell package or not. Three-point shooting is one of the most sought-after skills in the NBA nowadays, and there’s no denying Fournier is a top-notch marksman.

So don’t be surprised if the Frenchman gets moved before the summer ends. Though a one-trick pony, he’s not untradeable by any stretch.

Below are two hypothetical trades involving Fournier, along with some added analysis:

This transaction is an example of a one-for-one swap with the potential to be a win-win for both teams.

For the New York side of the coin, Richardson gives the franchise its heir-apparent to the much-beloved Reggie Bullock; he is an uber-physical defender with great size at 6’6″.

What makes Richardson such a unique defender for his position, and so versatile, is that he’s prolific in accumulating both steals (77th percentile in steal percentage with San Antonio) and blocks (64th percentile in block percentage).

As for why San Antonio would pull the trigger, adding Fournier would be a step in the right direction offensively for a team that has yet to embrace the three-point-centric NBA of today. Since 2016-17, only twice have the Spurs finished outside the bottom five in the league in three-point attempts per game. Maybe the storied franchise has yet to get with the times because of their past.

Not long ago, the Spurs were a dynasty and were never among the leaders in threes made or attempted, even in their golden days. But basketball has changed immeasurably since San Antonio was on top of the NBA world. Three-point shooting is now essential to success at the highest level, and Fournier could finally convince the Spurs organization to embrace the three-ball.

Fournier also makes sense for the Spurs in terms of the direction they’re heading. Along with several other organizations, San Antonio will tank for generational prospect Victor Wembanyama in 2022-23. And Fournier isn’t likely to hurt the team’s chances at a top pick even if he gets plenty of minutes and touches, thanks to his lack of defensive chops. He was a starter on plenty of lousy Magic teams early in his career, to boot.

Not only will Fournier undisturb San Antonio’s long-term goals, but he’ll also give the team another trade chip for future dealings, along with sharpshooter Doug McDermott. Fournier’s contract has a team option for year four, so he has only one season left before essentially becoming an expiring contract. This means the Frenchman will be a valuable asset during the 2023-24 campaign, particularly for any team looking to shed some salary before the 2024 free agency period, which projects to feature a star-studded class.

Both teams involved in this deal would benefit much from it. The Knicks obtain a stopper to check the Jayson Tatums, Kevin Durants, and Jimmy Butlers of the world (though Richardson’s offensive production has been erratic the last few seasons). The Spurs acquire the long-range specialist they need to help break their streak of three-point ineffectiveness.

Note: This analysis will not break down what Mitchell adds to the Knicks, which could (and likely will) be an entire article in and of itself.

Donovan Mitchell is the talk of the town in New York. Consequently, Knicks Twitter has recently been little more than a smorgasbord of theoretical Mitchell trades, which vary from realistic to “Danny Ainge would hang up the phone instantly.” The above hypothetical deal sends Mitchell to the ‘Bockers for a package of four players, including Fournier, and six picks. While Fournier is far from the sexiest asset Utah receives, there’s one big reason he’s involved: salary matching.

See, the Knicks need to send back near-equal salary to Utah to complete a Mitchell trade. Therefore one of New York’s larger contracts (Fournier or Randle) has to go. Remember, Fournier is due around $55 million over the next three seasons.

If the Jazz acquired Fournier, there’s no guarantee he would stick around. Utah would be in a full-fledged rebuild after trading Mitchell, and Fournier doesn’t fit the team’s timeline at 29 years old. His contract means it won’t be easy to deal Fournier on his own, but if anyone can find trade value in him, it’s Jazz head honcho Danny Ainge.

Ainge, who spent more than a decade as the general manager for the Boston Celtics, has built a reputation around the league for being a savvy and creative trade negotiator. He pulled off some of the biggest heists in NBA history during his time in Boston, including the Paul Pierce and Kevin Garnett trade with Brooklyn in 2014, which landed the Celtics draft rights to Jayson Tatum and Jaylen Brown.

So if Fournier ends up in Utah, don’t rule out Danny Ainge trading him again before long. Ainge’s nickname is “Trader Danny” for a reason — he relentlessly seeks out trades and surveys all options.

As aforementioned, given Fournier’s hefty salary and defensive deficiencies, the Knicks won’t have limitless trade partners to work with and may have to consider three-team trades to get a deal done. A few additional destinations make sense, though, such as win-now teams who are already sound defensively (Bucks, Heat) or those with a desperate need for outside shooting and limited ability to add better-rounded talent (Lakers, Blazers).

If the Knicks genuinely want to move Fournier, it will happen – and by some accounts, they do. It’ll just take some patience from Leon Rose to find the right deal to swing on.

»READ: What does a healthy rotation mean for Immanuel Quickley?

»READ: The Immanuel Quickley and Derrick Rose show is back