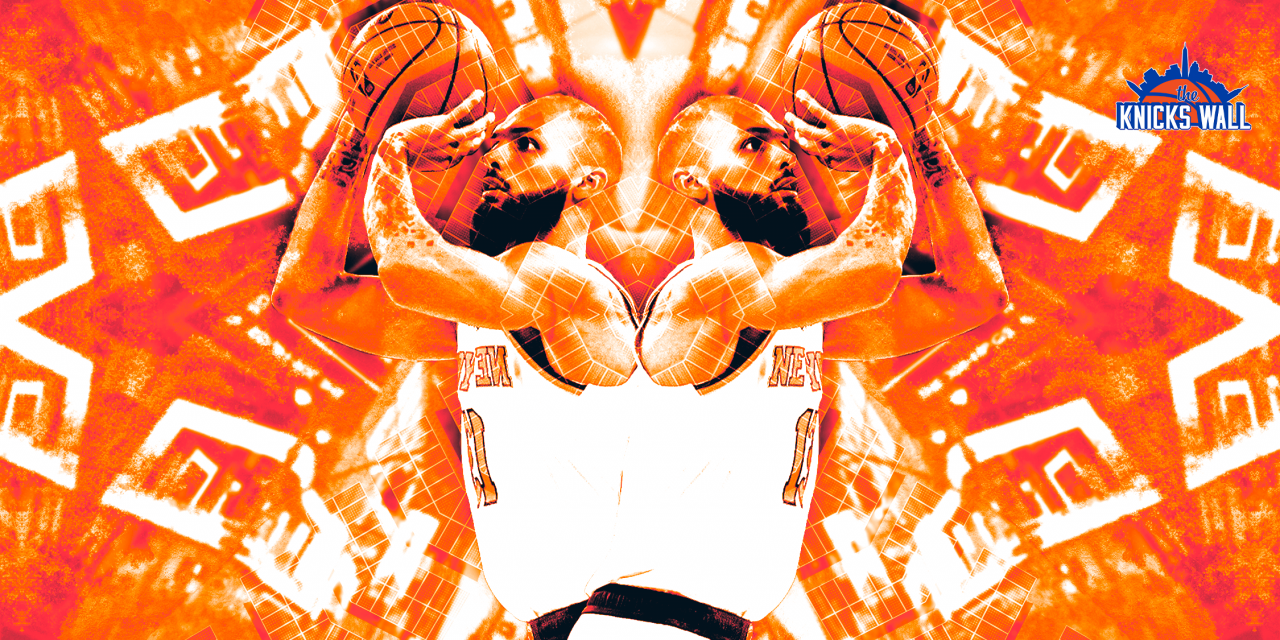 Although Evan Fournier’s shooting is valuable to the Knicks, the investment that New York made in him is proving to be too much for a player with so many limitations in other facets of his game.

When the Knicks signed Evan Fournier to a four-year (yes, with a team option, calm down), $78 million contract last summer, the reactions were mixed. Some were excited – after all, the Knicks were coming off a playoff run where their lack of shot-creation was laid bare for the world to see. Others were… more skeptical.

After the excitement surrounding his sizzling Knicks debut began to fade into the background, it began to seem that the naysayers were right in a landslide. Fournier was hitting shots but otherwise, the guard play on both ends was largely a disaster. RJ Barrett was uninvolved in the offense, Julius Randle was struggling to find a rhythm and Kemba Walker appeared unable to put together more than an exciting quarter at a time.

While Fournier was knocking down threes, his overall “now you see me, now you don’t” presence was excruciating to watch on a game-by-game basis. From the beginning of the season to the end of December, the Frenchman had the same number of games with 15 or more points as he did single-digit scoring games (14).

Eventually, the Fournier experience turned into something closer to what could’ve been expected from his Orlando Magic days: good and audacious shooting paired with inconsistent overall scoring, mediocre decision-making with the ball, and of course, bad defense.

This is great defense from Fournier, and when I mean great defense, he does a great job pointing out that Draymond is wide open. THAT'S HIS ROTATION! pic.twitter.com/0LxT8z4sOy

Throughout the year, there was much consternation regarding Tom Thibodeau’s choice to use him in a Reggie Bullock-esque three-and-D role, which is understandable, given his defensive deficiencies and the fact that he was brought in to juice the team’s self-creation ability. But while his individual scoring trended upward when given slightly more on-ball responsibility, there seemed to be little positive impact team-wide: in his two highest-scoring months, which were also the only two months his usage rose above 21%, the Knicks went 8-17 while posting two of their three lowest monthly offensive ratings of the year.

He struggled to turn the corner when attacking set defenders, and his decision-making remained incredibly shaky. He rarely kept the ball swinging around the perimeter, and often got himself in jams that led to bad turnovers.

In the end, despite the hopes for more self-creation, the role Fournier settled into was basically that of a shooting specialist. His adjustable release point and movement ability helped him be the most versatile off-ball shooter in the Knicks guard rotation and he was rewarded with the Knicks record for threes made in a season.

Given his strong shooting season and overall deficiencies elsewhere, it was widely agreed that for the year, Fournier posted roughly neutral value for his contract relative to other shooting specialists. It’s a theory that seems to hold up when compared to the Duncan Robinsons of the world.

But that statement also leads to a more important philosophical question. It’s great(ish) to reach neutral value in your archetype, but not all archetypes hold the same level of value. So it has to be asked: how much value does the role of shooting specialist hold in a league increasingly populated by high-level shooters?

(*One caveat: the line between “three-and-D” and “shooting specialist” can be hazy. I have my opinions on players like Reggie Bullock and Joe Harris, which I will explore further as we go.)

While looking through rosters around the league, it becomes increasingly clear that there’s an incredibly high level a shooting specialist has to reach to merit a starting spot in the NBA, and if that level slips for a season, it becomes very difficult for a team to justify continuing to start them, even with the inherent gravity their reputation gives them.

Duncan Robinson is the perfect example of this phenomenon. Fresh off of inking a five-year, $90 million contract extension, Robinson had a down shooting year, resulting in him seeing the fewest minutes in three years and eventually being demoted from the starting lineup in favor of Max Strus, himself a (slightly worse) shooting specialist, but one at least a little more capable of offering resistance on the defensive end.

Joe Harris is another interesting example. Harris, with two years and $38.6 million left on his contract, hasn’t shot below 41.9% from three in over five seasons and has improved as a defender enough to be right on the border between shooting specialist and three-and-D. And yet, after shooting 32.7% from three and scoring 9.6 points a game over the Nets’ seven-game second-round series with Milwaukee two years ago, it was a common refrain from fans that the Nets should trade him expeditiously, while his value was still relatively high. That’s anecdotal to the extreme, but it underscores how easy it can be for the wheels to fall off, value-wise, the moment the shooting percentages drop.

Looking around the league last year, the list of shooting specialists who start a good amount of games for their teams is a small one. We can look at it as three tiers:

Looking at that list of players tells you how hard it is for even the second tier of shooters to maintain starter value – Harris is the only one with a relatively firm grip on a starter’s spot. This also jives with what we’ve heard this summer about the likelihood of Fournier being moved to the bench if he remains with the team for next season. It seems that the ship has largely passed for Fournier to join the High-Volume Gunners group, though his career record as a passer makes it not totally out of the realm of possibility. While Fournier’s career numbers puts him firmly in the middle of the pack of the above-mentioned names, only Huerter has a higher career assist percentage, though Fournier’s took a dramatic step back this year.

What’s clear is that while shooters are always necessary, the value of a pure shooting specialist has grown increasingly limited in a league with an exceptionally high level of shooters from top to tail. Consider the fact that even “three-and-D” role players have to be more than what the name implies at this point. A three-and-D wing who can’t attack a closeout or make quick, basic reads, is no longer the valuable commodity it once was. For those who don’t even have the defense to hang their hats on off-shooting nights, the level they are as a shooter has to be absolutely elite of the elite for them to be clear-cut positive starters.

None of this means that Fournier has no place in the league. As a bench piece/spot starter, his weaknesses matter less and his versatility as a shooter can be appreciated for what it is. If and when the Knicks extend Barrett, Fournier is likely to be the fourth-highest player on the team, rather than the second-highest player he was this past season. When that happens, his role as a bench player will become more and more palatable, and his playmaking will be a welcome bonus, rather than a necessity that still often falls short of the mark.

But from a team-building and philosophical standpoint, it seems that the ship has sailed on investing major money or valuable draft capital in a player who can’t provide anything outside of shooting.