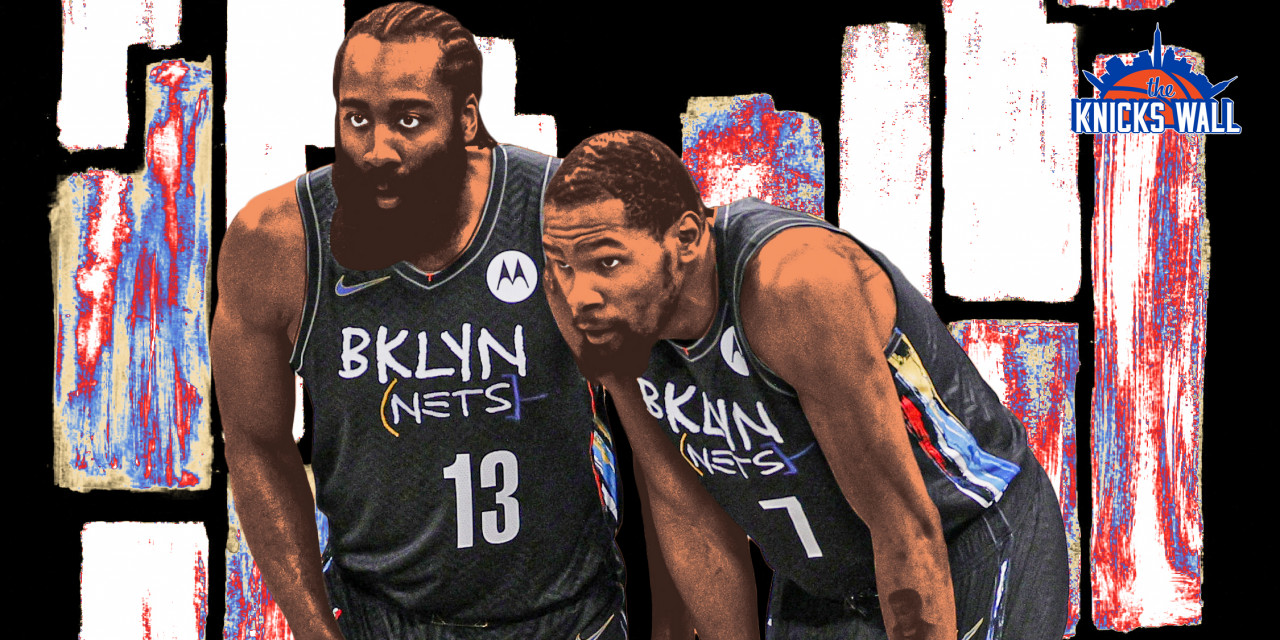 With Kyrie Irving’s season status in flux, might the Knicks be able to steal a few games from the Nets this year?

The Knicks will play the Nets four times this season, splitting a pair of games each at the Barclays Center and Madison Square Garden. The first game will be played in Brooklyn on November 30th, and then they won’t square off again until February 16th. They’ll travel to Brooklyn again on March 13th, and close out the season series on April 6th at home in their third-to-last contest of the season. All four games will be nationally televised.

The Knicks dropped all three of their games against the Nets last season, losing by no more than seven points in every contest. They crept slightly closer in each game, losing their final matchup of the season by just a couple of points, 114-112. They never faced the team at full strength, either. In their first game back in January, Kyrie Irving was injured and James Harden had not yet been acquired. In their additional two games in March and April, Kevin Durant was injured and the team faced Irving and Harden. In that April game, though, Harden left with a leg injury after just four minutes played.

The Knicks would obviously fare better if Irving is unable to play, which is becoming increasingly likely as he continues to resist getting the COVID-19 vaccine. Under current New York state mandates, he would not be allowed to play in any of Brooklyn’s home games. Luckily for the Knicks, this extends to away games at Madison Square Garden, as well. So, the Knicks would miss him in all four games should he not get the vaccine throughout the season. The Nets will have to accommodate him as a part-time player on the road only, as head coach Steve Nash alluded to.

Even though the Nets have three of the biggest stars in the league, they are all rather injury-prone. Irving was counted on in stretches last season to keep the Nets afloat when the other two were down. In a situation where Harden and Durant may be injured this season, there wouldn’t be anyone’s shoulders for the workload to fall upon if Irving continues to fight against the vaccine.

However, the Nets would remain a top-five team in the NBA regardless of Irving’s status, as they have the luxury of carrying three of perhaps the 10 best players in the NBA on their roster. Durant, who signed back in 2019, and Harden, who was traded for early last season, are more than capable of carrying a team into the depths of the NBA playoffs on their own.

After missing his first season due to an extended Achilles injury recovery, Durant quickly returned to his MVP form for a brief portion of the 2020–21 season. The Knicks only faced him once last season, and he put up 26 points on 10-18 shooting from the field to go along with six assists. In 35 games played last season, Durant averaged 26.9 points, 7.1 rebounds, and 5.6 assists, nearly willing the Nets over the Bucks in the Eastern Conference Semifinals while both Irving and Harden suffered injuries.

Though he only played in 11 games with Harden last season, the two could be the most lethal combo in the NBA if healthy. Harden suited up for two games against the Knicks but got injured in the last contest of the season, only logging four minutes. In the other game, though, he put together a triple-double with 21 points, 14 rebounds, and 15 assists.

In those 11 games with Durant, Harden played pretty close to a triple-double level, averaging 21.1 points, 7.8 rebounds, and 12 assists. By this point in his career, Harden has figured out the point guard role, and should be able to excel in it should Irving not play this season. Both are facilitators, more than able to bring the ball down the court and draw up plays for themselves and their teammates.

A healthy season of them together could spell danger for the rest of the league. They already have a positive history of playing with each other back in the Oklahoma City days, and could return to form with a larger sample size. With a supporting cast of players like Blake Griffin, Patty Mills, Bruce Brown, and Joe Harris around them, the duo should be more than capable of running the offense and dishing out to others when needed.

How The Knicks Can Answer Back

It’s tough to say how exactly the Knicks should handle the Nets’ big three, as they’ve never actually faced all three together. They only faced two of them once in the game on March 15th, when Irving and Harden were healthy. On top of that, as long as Irving holds out on the vaccine, this big three might not even be seen all season long. The Knicks are, however, well-equipped regardless of the lineups the Nets roll out against them.

Mainly, the Knicks are going to have to exploit the Nets’ weak defense. The Nets rely heavily on their firepower offense, having finished last season 24th in adjusted Defensive Rating. James Harden is infamous for his lack of defense, and Kyrie Irving is no star in that area himself. Durant is a stout perimeter defender, though, and would most likely be tried with opposing teams’ best players. In this case, he would be stuck to Julius Randle.

How the Knicks would exploit this is through their three-point shooting. If the Nets defense is competent anywhere, it’s inside the paint, with Durant and guys like Nicolas Claxton, who can block shots and put a body on ball-handlers. Beyond the three-point line, the Knicks should be able to see the light of the day relatively often and get the bulk of their points from there.

One of the weaker three-point shooting teams last year, the Knicks even took this approach in their three games against the Nets last season. Even though they were 27th in the league in three-pointers taken per game at 30, they shot significantly more from there in those games. They shot 40 or more threes in two of those games and shot 40.5% from beyond the arc across all three.

Going into this season, the Knicks addressed their inability to shoot threes at a high clip in a major way, bringing Kemba Walker and Evan Fournier into the fold. The two both average at least five three-pointers taken per game in their career, and should only further exploit the weak Nets perimeter defense. If the two of them, combined with the likes of Immanuel Quickley, Alec Burks, and RJ Barrett, shoot from three-point range at large, they’ll stand a far better chance against the Nets than they did last season.

They’ve done a great job this preseason showing just how important the three pointer will be for them, and just how efficient a shot they can make it. In their last game against the Wizards, the Knicks shot 52 three-pointers and made 24 of them, good for 46.2%.

PINCH ME WE HAVE PULL UP 3 POINT SHOOTING pic.twitter.com/H9zsGOZ6CS

Either way, this will likely be the Knicks’ toughest test out of the Atlantic Division. With or without Kyrie, the Nets holster some of the best talent in the NBA, highlighted by two MVP winners. They, like the Los Angeles Lakers, have added a lot of veteran players, like Mills, Griffin, Paul Millsap, and LaMarcus Aldridge, to help round out the team and provide them with depth.