Every Game a Milestone for Ntilikina in Fizdale’s Eyes 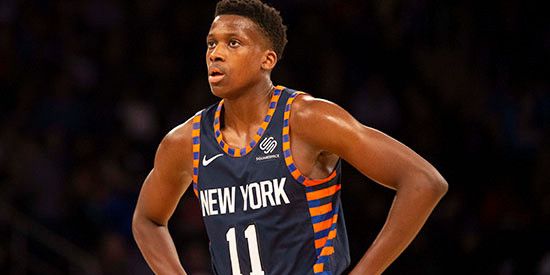 Frank Ntilikina’s development has surprised fans and analysts, but for David Fizdale, the position-less guard can lead this team forward on both ends of the floor.

“Frank talks,” New York Knicks head coach David Fizdale answered. “He talks a lot … [and] he plays with a real intensity and passion.”

The Knicks haven’t been averse to enigmatic players. New York drafted Kristaps Porzingis fourth overall in 2015, and despite being high up on draftniks’ boards, the European player’s ability was never in the forefront of college hoops fans’ minds like Jahlil Okafor and Karl-Anthony Towns.

Frank Ntilikina, the eighth overall selection in 2017, is a similarly unknown entity—but he doesn’t share an extroverted personality like the sidelined All-Star Porzingis does. Ntilikina is quiet, humble, and barring an infrequent smirk, nonchalant. That applies both off the court and especially on the hardwood. However, if the Knicks are ever going to be a contending team in the NBA, they’ll need their point guard to animate his teammates and the Madison Square Garden crowd.

For Fizdale, Frank Ntilikina’s development isn’t predicated on position or point totals, but rather “small milestones.” Some of those milestones include raising the number of threes per game from the Frenchman (he’s doubled that number thus far), making sure the team’s pace is trending upwards, and “absolutely hav[ing] a first-team defensive mindset.”

On pace, however, the Knicks find themselves playing the slowest team in the Association: the Indiana Pacers. Indiana ranks dead last in the league in pace, per NBA Stats, while the Knicks aren’t far off; New York ranks eighth-to-last in pace, despite Fizdale’s insistence to push the ball, get into transition opportunities, and his admiration of the higher-scoring totals across the NBA.

That’s where Frank Ntilikina comes in. Ntilikina’s bumps and bruises diagnosed with being a young player in basketball have occurred on the offensive end mostly. He defends respectfully for someone unable to legally consume alcohol in the United States, but finding his role on offense will take more time. Frank is the NBA’s “Benjamin Button,” according to FiveThirtyEight’s Chris Herring. “Ntilikina is not merely good at [defending the screen-and-roll]—he’s great at it.” On offense, though, Frank is only now breaking through his potential. “The French Prince”s smooth stroke from long range has only improved available passing lanes for the Knicks, who rank next-to-last in assist numbers.

Predictably, when opponents catch up on Ntilikina’s three-ball ability, they’ll begin closing in harder and forcing the second-year guard-forward to either give up the rock or test his movement. This will be crucial in Frank’s next step in his development—driving and penetrating would expand the point guard’s role and give his offense breakdown capabilities the Knicks have sorely been lacking. We’ve seen point guard Trey Burke flash this power on occasion, but his antipathy to shooting three-pointers have lessened his impact’s ceiling.

At 6-foot-6, Frank is a different beast. Pushing the pace, making defenders second guess, and opening teammates for easy shots are next on the agenda for him. Right now, he’s on the right track and has a blank slate for Coach Fizdale.

If the 20-year-old can accomplish all that, then the “rest will fall into place.”