Examining the Knicks’ Sticktoitiveness With Development Through the Knox-Ntilikina Lens 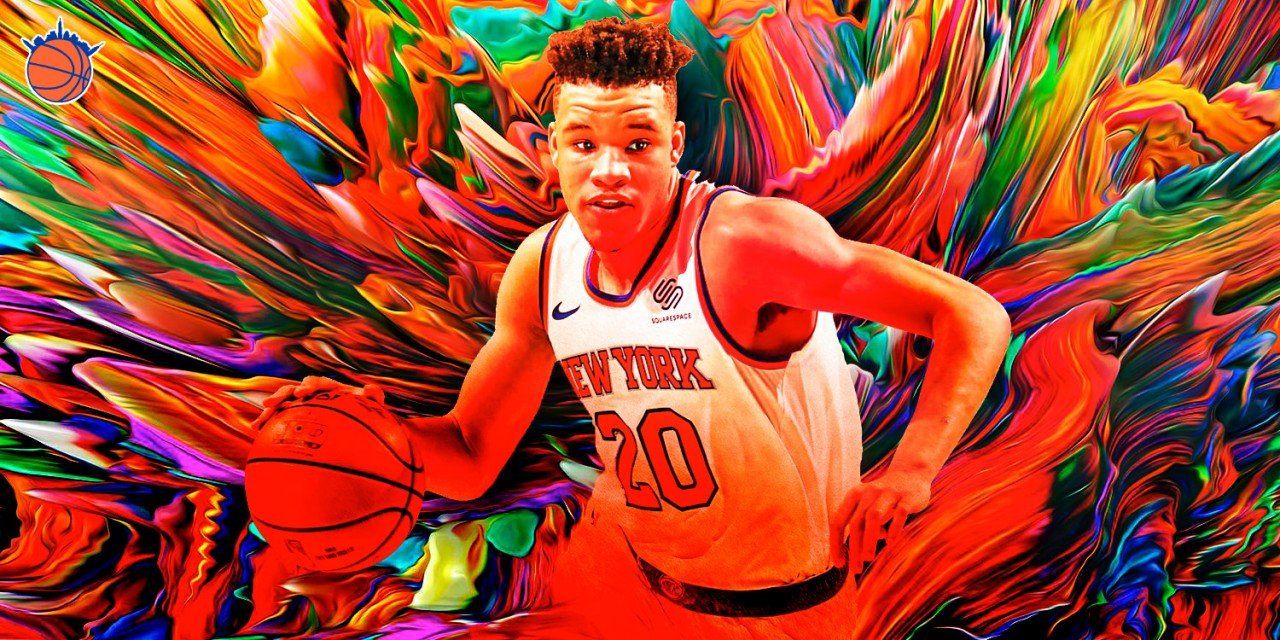 The performances of young players in Kevin Knox and Frank Ntilikina create a polarizing spectrum of the Knicks’ capacity to develop talent.

It’s not even October and the New York Knicks are already taking a beating.

Free agency notwithstanding, the organization has taken L after L this summer. From this cringey unrelated tweet from the official PR account to the buzz generated from former assistant coach Dave Hopla blowing the whistle on a consulting firm that quite possibly destroyed the franchise’s redemption, it’s becoming difficult to argue that the Knicks are progressing as an organization.

An irresponsible tweet looking to take a jab at a newspaper may seem like a petty, insignificant wrinkle, but if there’s anything we can learn from today’s world it’s that disgraceful tweets are symptoms of much larger issues.

Since the team has undoubtedly been unsuccessful in terms of regular season output (as usual) and trades either being neutral or impossible to measure in the present, their oft-repeated goal of player development may be the best indicator of actual change within the organization.

And who better to examine as cases of Knicks player development than the most criticized draftees on the roster, Kevin Knox and Frank Ntilikina?

In Defense of Kevin Knox

In a way, the spotlight Knox earned from Summer League set him up to be the goat he was in the regular season. Admittedly, the hype surrounding him was blown completely out of proportion in a tournament with teams composed of mostly non-NBA-level players.

Knox entered his rookie season as a player who would contribute more to the team than the veteran forwards the Knicks had signed, but on a team where Mario Hezonja and Lance Thomas were his biggest competition it’s much less a lofty expectation than it is an expected happening. If you bought a car you’d expect it to not be a lemon as soon as you drive it off the lot, right?

However, there’s no way around criticizing Knox’s atrocious first 16 games. In November alone the former Wildcat shot 31.6% from the field. He averaged 7.1 points and 2.9 assists. It’s impossible to defend a field goal percentage that looks like Powerball odds. He was off to an abysmal start, and the injury that sidelined him looked like another setback in what was shaping up to be a sorry excuse for a rookie year.

Nevertheless, his struggles speak to the Knicks’ unrelenting approach to development. Knox still managed to play 17.8 minutes per game in November, although such horrid play would likely delegate any other rookie to the bench or the G League. Whether Fizdale’s strategy of letting his rookies play through mistakes was the best method to get Knox going is up for debate, but it did lead to a very strong December for the rookie. His 17.1 points and 6.0 rebounds a contest with a 38.4% three-point field goal percentage earned him Eastern Conference Rookie of the Month honors. Plus, it led to a bit more information on Knox’s identity as a player.

Knox maintained catch-and-shoot three-pointer attempts from that point forward, shooting at least four a game, but he never quite hit a stride at the beginning of the calendar year until March. His catch-and-shoot makes to attempts for January, February, and March are illustrated below.

With the Knicks floundering, Fizdale made the executive decision to keep Knox shooting nearly 40% of his total field goal attempts from beyond the arc. For a while it yielded ugly results, and even during the last 10 games he shot a measly 34.0% from three, but there was a clear and defined goal in mind.

Knox entered the league as one of the most raw players in his draft class, and teams used that against him. As an undisciplined, inexperienced athlete, he was tortured on both sides of the court. He was neither quick enough to effectively utilize screens or strong enough to post up, narrowing his offensive capabilities to nearly zilch. But Fizdale saw the potential in a 6-foot-10 forward (the forehead adds at least one extra inch) stretching the floor and hitting the occasional triple whether he was playing small forward, where he played 55% of his minutes, or power forward, where he played 44% of his minutes.

It hasn’t been pretty or even concretely successful, but so far, the Knicks invested in their ninth overall pick in the 2018 draft for better or for worse. It’s a much different case is Frank Ntilikina.

In terms of Ntilikina’s development, the new Knicks staff is much like the old. Over the last two seasons he split his time between two positions like Knox in his rookie season. Looking back, it’s surprising Ntilikina managed to average 21.0 minutes over 43 games. Emmanuel Mudiay’s rise to prominence, due to Fizdale’s coaching, largely left Ntilikina in his shadow. Mudiay’s own development or Noah Vonleh’s deal could serve as credits to the Knicks developmental staff if either of them had secured deals beyond one year. As of now they both look to be in the same precarious position as Ntilikina—hanging on to their NBA hopes by a thread. Still, Vonleh acknowledged the Knicks for giving him the breathing room to grow as a player.

Ntilikina has yet to receive such confidence from the staff, and considering his lowlights this past season, it would be hard to blame them if the Knicks were anyone else. He was active for much of the early part of the season, and before the All-Star break the sophomore averaged 5.9 points and 2.8 assists on 34.2% shooting. However, that never stopped the Knicks from playing Knox.

Altogether, there doesn’t appear to be a lot to say about Ntilikina’s second season. Marred by an injury that never allowed an interesting pairing between Ntilikina and Dennis Smith Jr. to manifest, his career thus far has been bad luck combined with even worse management—a deadly combination for a rookie who was known to need structure and direction from day one.

At best the Knicks provided great effort and mediocre guidance to Kevin Knox in his rookie season. The growth that may have occurred was brought along by some very ugly play. On the other hand, Ntilikina’s growth is quite literally nonexistent. There was close to no statistical difference between his rookie and sophomore season.

What may have made the difference this time around is the circumstances. Knox, chosen by the current regime, had a clearly defined role. His job was to score. Carmelo Anthony was gone and Michael Beasley was nowhere to be found. For better or for worse, the Knicks had Knox chasing ghosts. Having demonstrated athleticism and scoring chops during Summer League and Kentucky, it makes an inkling of sense to pray that Knox would save the Knicks from a stagnant offense.

It didn’t pan out how anyone would have hoped, but the attitude going into his sophomore season is one of confidence and a more solid identity as a basketball player. In July he went on to tell Newsday he’s “feeling more comfortable and more confident, dribbling the basketball, shooting the ball, I feel a lot stronger out there.” Maybe Fizdale’s philosophy of putting him on the court for as much time as possible did the raw athlete some good. He needed more than a little polish his first season.

For Ntilikina, though, a guard inherited from a previous regime, it appears that no concrete strategy was ever put in place. If there was, it was piss-poor. In talks about development and the Knicks’ rising prospects he’s often in the shadows, probably by design.

Doomed from the start, the only thing keeping Frank in New York is a lack of interest from opposing teams.

There’s probably only room for one big project, even though there’s a full office of development staff. They won’t make room for Frank in development because they don’t want to make room. The fact of the matter is measuring the Knicks’ development of Ntilikina wouldn’t make much sense because it appears as they’ve done everything in their power to ignore him. Even banishing him to the G League where he could get some burn would be more beneficial than the Knicks’ non-moves.

In short, Ntilikina’s unlucky last season is an unreliable gauge for the Knicks’ development resources. However, using Knox as a proxy appears to be fair. For better or for worse the words “player development” are more than a buzz word for the organization, but the implications of how the Knicks fostered Knox’s growth are just as pertinent to the conversation.

Given that Knox fell to the lowest of lows in his rookie season, New York’s grade in developing him is a “C” at best. So, while they’re fully invested in the future success of their recently drafted young players, it’s questionable whether they have the tools necessary to carry out such a task. R.J. Barrett—the Knicks’ highest lottery pick since Patrick Ewing—has tons of growing to do, and his rookie season just might be a true test of the development personnel.