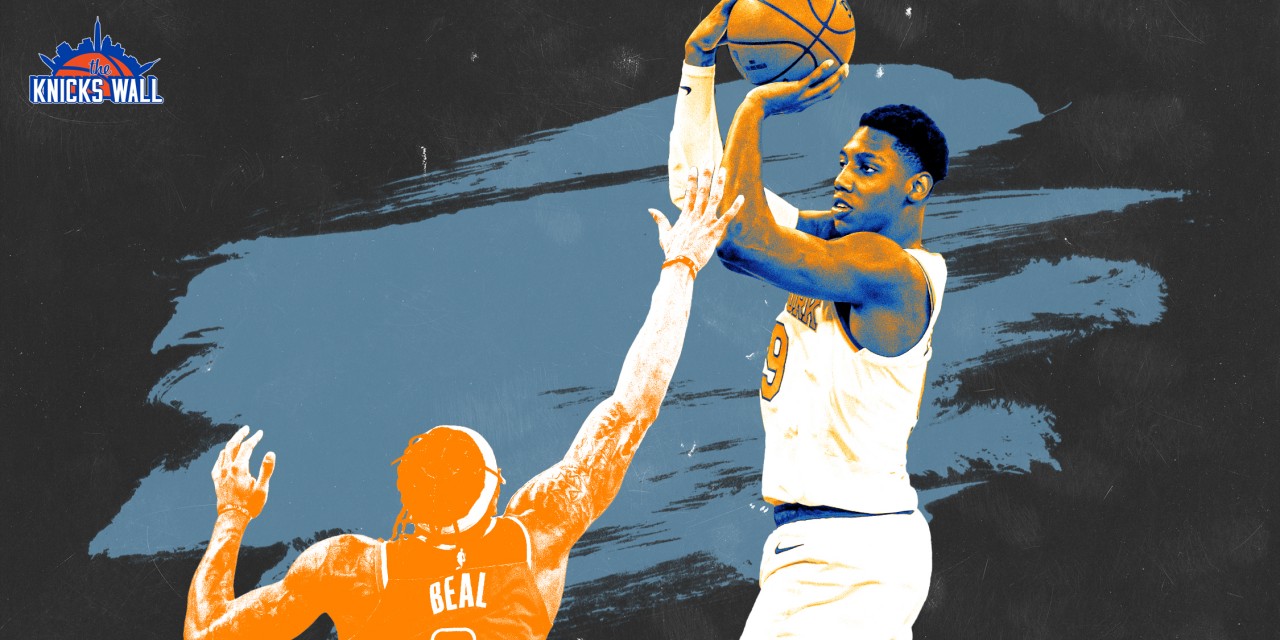 RJ Barrett continues to develop as a two-way threat on the perimeter. His recent stretch of success suggests he could become an All-Star. The next phase in his game is an improved floor game and unassisted threes.

It’s fair to say that the conversation has begun to change around New York Knicks forward R.J. Barrett over the last three weeks. The second-year swingman has seen a jump in his efficiency, modest evolution as a playmaker, and his defense, his most underrated skill, become respected. It seems as if the remodeled roster and the upgrade from David Fizdale to Tom Thibodeau have helped speed up his overall trajectory.

Since coming off the All-Star break, Barrett has averaged 19.2 points, 5.2 rebounds, and 3.2 assists. The True Shooting percentage of 56.2% is buoyed by improved free-throw shooting (74.4%) and three-point percentage (42.3%). If Barrett is supposed to take the leap and move from the “good, young wing” to “All-Star,” these stretches need to happen. The fourth quarter and overtime stretch against Memphis—15 of his 20 points with several clutch moments—need to occur more often.

His scoring at all three levels has vastly improved, the conversation has shifted to the next steps. What are the next steps to make Barrett an All-Star-level player?

The one thing, however, in Barrett’s game that I’m curious about is his shooting. Sustainable? As Barrett has been at or above 34% from the outside in each of the previous three months, I would like to think so. How he gets them, however, is interesting. This season, Barrett has shot 76-of-201 from outside, with 75 of them being assisted, via Basketball-Reference. That’s 98.7% of his threes coming off the hands of a teammate.

Expanding his floor game is crucial for Barrett to evolve and take his game to the next level, as it appears to be the only thing stopping Barrett from not only becoming a great player but a player the Knicks could consider leaning on offensively and building around.

The majority of Barrett’s threes come from the catch-and-shoot. More often than not, Barrett is the recipient of a kick-out pass to the corner after Julius Randle or Derrick Rose drive and absorb the defense. Randle superficially has been huge in finding the former Duke guard on the outside, using his ball-handling to extend the play further, use gravity, and pull a defender in before kicking it to Barrett. As a result, Barrett going from 33.8% on catch-and-shoot threes as a rookie to 38.1% as a sophomore has been instrumental in New York’s success this season, providing a bit more stretch in New York’s starting lineup.

But when it comes to his floor game, Barrett’s ability to create for himself lags behind a bit. He’s comfortable attacking the basket—meticulously drifting through the lane before exploding to the rim. He’s also solid when creating in the middle of the floor, capable of getting off the screen settling for a solid jumper. However, the next proper phase here is getting him the ball a bit further back and allowing him to assume some of those Randle possessions, allowing him to create from the top of the key.

Two players in a similar situation are Raptors forward OG Anunoby and Celtics swingman Jaylen Brown. Anunoby, fresh off of signing a four-year, $72 million extension with Toronto, is in the midst of taking his game to the next level as Toronto moves into its post-Lowry era. Still a bit reliant on creation to get him threes, Anunoby has taken baby steps in creating his own offense.

Didn't hit it, but love seeing OG Anunoby take a pull-up 3 out of the side pick-and-roll, the sort of thing that can eventually become an asset because of these reps pic.twitter.com/X7wei9Sk8p

For all the comparisons between Barrett and Heat forward Jimmy Butler, I’m starting to believe that Brown might be a more apt comparison. Coming out of the University of California, Brown was largely viewed as an athlete with shooting concerns. However, Brown had a much better feel as a shooter and creator, which made him the third overall pick and assisted in his development in each of the last four seasons. Now Brown, at 24, gives Boston a one-two All-Star punch with Jayson Tatum.

The idea of “what does it look like?” is a bit silly because all players and situations are different. However, as Barrett continues to feel a bit more confident with putting the ball on the deck, Brown is a good analog for what he may provide when he figures it all out. Brown is a versatile, do-it-all wing player who can punish you by attacking the rim while also offering a true outside threat if you leave him too much space.

In short: Barrett needs more operating out of the pick-and-roll, absorbing some isolation possessions from Randle and more pull-up and spot-up threes. So, how do we get there?

The idea behind “Point Barrett” is one. Last season, the Knicks had a brief spell where Barrett ran the show, and he looked good. As New York continues to figure out and shuffle through the point guard position, giving the ball to Barrett might not be the worse idea in the world. Like Butler, Barrett getting those lead dog possessions offers him a chance to expand his shooting further and create a pallet. Barrett’s 14.5% assist rate is a bit too low for someone with Barrett’s creative ability.

And I would be remiss if I didn’t mention the one crux in Thibodeau’s coaching performance this season—using Barrett with non-Randle minutes. Even with a bit more minutes of “Barrett and the Bench” against Brooklyn, the two have been largely tethered together in Thibodeau’s lineups. Placing Barrett among a true rim-running big man like Obi Toppin and two catch-and-shoot perimeter players like Immanuel Quickley and Reggie Bullock could open the floor and make things a bit easier in giving Barrett lead reps.

When it comes to second-year forward R.J. Barrett, he might be underrated at the moment. His defense is solid, and key to a New York team ranked in the top 10 defensively for the entire season. While slated to play a secondary role alongside Randle’s creation, his passing has remained positive and the shot profile, scoring from the outside, the free throw line, and the rim, have all vastly improved. This 17-game stretch has suggested that Barrett is heading into year three of his NBA career with All-Star aspirations.

To do that, however, the next step in his game that needs to be ironed out is the shooting. Getting him to become a better shooter on unassisted threes, specifically pull-up threes and threes in isolation, would have him going from a good young player to someone who can serve as a top-three option on an excellent team.

»READ: How much does RJ Barrett’s three-point development mean for his personal progress