The Expendables: Sorting Out the Knicks’ Crowded Frontcourt

Is another move looming for New York and its four centers on the roster?

Now that the New York Knicks have finally moved on from Carmelo Anthony, there is speculation as to whether more moves will be imminent from Knicks GM Scott Perry and the front office.

Much of this speculation is fueled by the crowded frontcourt on the Knicks roster. Adding Kanter, strictly a center/power forward, to an already bloated rotation of Kristaps Porzingis, Willy Hernangómez, Kyle O’Quinn, and Joakim Noah makes it reasonable to expect the Knicks to try to lose one of these bodies before the start of the season.

Porzingis and Hernangómez, the franchise cornerstone and his promising young frontcourt partner, aren’t going anywhere. Kanter cannot be traded for another 60 days, around November 25th. The Knicks may look to move the 25-year-old at some point this season for financial purposes, considering that he is owed a whopping $20.9 million this season (due to a 15 percent trade kicker in his contract) and $18.6 million for 2018-19 assuming he picks up his player option next season (which he will most likely do considering the tepid market for all-offense no-defense big men in the today’s NBA generally).

So while the Knicks will have reason to consider trading Kanter at some point, it can’t be viewed as a foregone conclusion. Perry will have to look elsewhere to thin out the frontcourt rotation before the season. That leaves Joakim Noah and Kyle O’Quinn.

Joakim Noah may be the worst contract in the league, owed $56 million over the next three seasons, all the while being the least productive player in the Knicks’ frontcourt glut. Trading Noah really isn’t an option for a franchise looking to the future–assuming you could find a team willing to take on his money–as the Knicks would have to pay a heavy price in future assets, something Perry and co. should not even be considering given the team is now in full-on tank mode post-‘Melo.

Another option is to stretch Noah, something The Knicks Wall’s resident cap-guru Jeffrey Bellone did a great job outlining after the ‘Melo trade. The pro’s and con’s of stretching Noah’s contract are complicated: freeing up some frontcourt minutes, and getting more short-term cap flexibility by turning a heavy $37.8 million cap hit in 2018–19 and 2019–20 into a softer annual cap-hit of $7.6 million over five seasons from 2018–19 through 2022–23.

On the one hand, Noah is dead money. Any minutes he gets are token veteran face-savers relieving both player and front office of the awkwardness of paying or getting payed $18+ million to sit on the bench, minutes that should be going to help Hernangómez in his development, give Porzingis the opportunity to play some center, and increasing Kanter’s production and by extension his trade value. Stretch Noah and spend the extra $10-ish million per season on bang-for-your-buck production.

On the other hand: long term cost. However small, it’s not worth short-term gains when the short-term goal is to be as bad as possible and land as higher draft pick as possible (even if Knicks brass won’t admit that). Joakim Noah has on-court tank-value. Having him as your third-string center playing 10–12 minutes per game is a valuable contribution to the Luka Doncic lottery fund.

Noah’s money, whilst dead, is dead money that should be earmarked for future contracts already: Porzingis will be extension eligible in 2019–20, Hernangómez’s rookie deal runs conveniently parallel to Noah’s, and will be due a big raise just as Noah’s money comes off the books in 2020–21, Frank Ntilikina will be extension eligible one year after that in 2021–22, and whichever lottery pick (please, Doncic, please) the Knicks end up with in the 2018 draft will be eligible the year after, in 2022–23.

In five years, the Knicks cap sheet will potentially, hopefully be dominated by three high lottery picks (KP, Frank, Player X from 2018 Draft) and Big Willy. Arguably, any medium-term spending with the hypothetical Noah-stretch-savings will hinder this rebuilding model whilst providing marginal on court benefit. Now, I hear you, this doesn’t sound like your typical Knicks rebuild, but let’s assume Scott Perry can resist the seemingly institutional allure of shiny free agent shaped objects long enough for New York to build something sustainable.

Squint hard and tell yourself that over the next three seasons Hernangómez and Noah are earning $20 million collectively, $10 million each per season. Assuming steady development by Willy, not an unreasonable figure for a starting center, and a slight overpay for the veteran leadership, experience, and defensive-horse-whispering of Noah.

Another variable to consider with Noah’s impact on frontcourt overcrowding, is that he’s set to miss the first 12 games of the season anyway from a 20-game suspension for using a banned substance at the end of last season. He’s also highly likely to miss time given his recent struggles with staying on the floor, only suiting up for 46 games last season. This means his impact on the frontcourt rotation will potentially be largely theoretical, depending on availability. 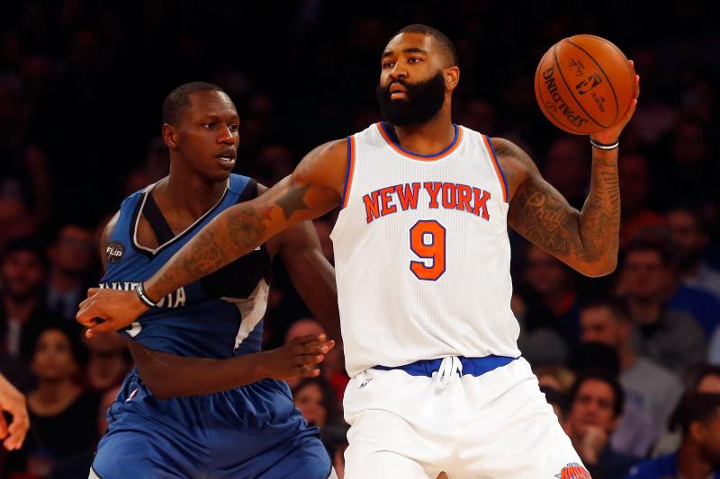 That leaves Kyle O’Quinn as the odd man out, the 27-year-old is a serviceable backup-big, on a cheap contract, owed $4 million per year over the next two seasons, with next year as a player option that whether he picks up or not will largely be influenced by how he plays this season. The desire for a trade may well be mutual given the competition for minutes in New York.

O’Quinn had a breakout year for the Knicks last season, and could help a number of playoff teams with his shot blocking, rebounding, high-post passing and mid-range jumper on a cheap and short-term contract. The Knicks just don’t need him now, and freeing up frontcourt minutes whilst getting a second round pick or young player in return would make sense for New York.

The Brooklyn Nets are thin in the frontcourt after losing Brook Lopez over the summer, and have no intentions to tank as they don’t own their own first round pick in 2018. The Philadelphia 76ers would likely have interest in some low-risk Joel Embiid insurance. The Houston Rockets could be interested in a Montrezl Harrell energy big replacement depending on how much they trust Nenê’s knees. The Memphis Grizzlies could be interested, after losing Zach Randolph over the summer and considering Brandan Wright’s health struggles in recent years.

There is definitely a market for O’Quinn, there are also positives to stretching Noah, one thing that’s certain is that there are one too many big bodies on the Knicks roster with the addition of Kanter. Especially given that Hernangómez and KP won’t always be playing together, and coach Jeff Hornacek needs to find time to play Porzingis at the five as a lone big in small-ball, shooting-centric lineups (one can dream). This is likely KP’s best position offensively, and now that he will be the primary option for Knick points with ‘Melo gone, the timeline for experimenting with the Unicorn at center has accelerated significantly.

It makes sense for Perry and New York to make another move, for a variety of reasons, it just remains to be seen which one he’ll go for.

The New York Knicks Should Trade for Zhaire Smith

Is Malachi Flynn the Draft’s Most Underrated Prospect?

Where Does Carmelo Anthony Rank in Knicks History?