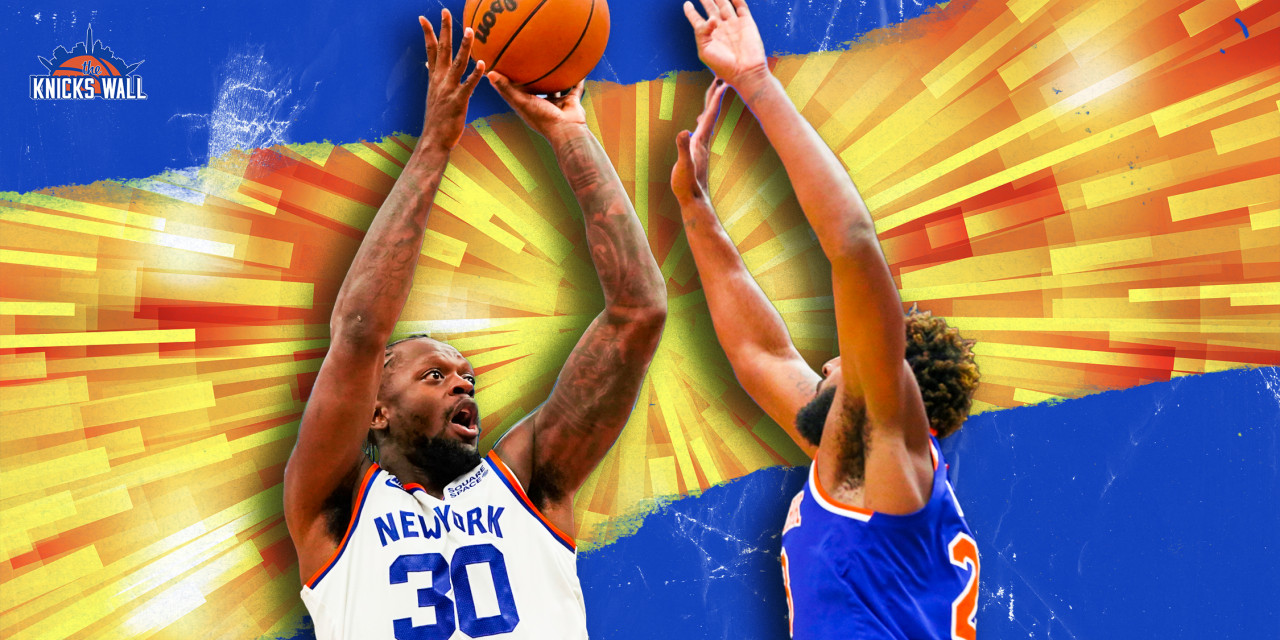 These Knicks are in a quandary, with a sudden burst of offensive composure and an incompetent defense—far from the norm for Tom Thibodeau.

Fourteen games into the 2021–22 campaign, the New York Knicks have been a feast-or-famine team. After an excellent 5-1 start to the season, New York is 3-5 since then. There have been nights when the Knicks look like a contender and others when they seem destined for the play-in.

This is around the time of year when trends begin to emerge, and identities are formed. For New York, it’s apparent (thus far) that their defense has taken a step back and their offense a step forward. Let’s explore the squad’s improved scoring firepower and diminished defense.

There are worse defensive teams in the NBA than the Knicks. Far worse. But this truth doesn’t change the cold reality that New York’s defensive efficiency has plummeted into the earth like a meteor compared to the season prior. Cleaning the Glass’ opponent points per 100 possessions metric accurately gauges a team’s defensive chops. The Knicks ranked fourth in the league in this stat (108.4) a year ago; they are currently 15th. After researching the ‘Bockers’ struggles in getting stops, one weakness stands out as the leading cause for their early-season woes: three-point defense.

The good: The Knicks can finally score

Per Cleaning the Glass, the Knicks have allowed 42.1% of their foes’ total field-goal attempts to come from deep, the second-highest in the league. And accuracy-wise, the ‘Bockers aren’t faring much better—opponents are shooting 36.9% on threes this season, which is the ninth-highest clip. The Knicks are the lone team in the Association that sits in the top nine in opponent three-point accuracy and frequency. New York hasn’t been just bad at defending the line. They’ve been arguably the worst.

The exact reasons for New York’s sudden inability to keep teams from taking and making treys are up for debate (the small sample size could be partly responsible). But it appears both new personnel and an overemphasis on defending the paint are playing a part.

Firstly, new starting floor general Kemba Walker—though he exerts effort on defense—is undersized at 6’0″ and thus a sub-par irritant. Opposing point guards have been able to torch him from all over the floor, including the three-point arc. Walker has defended an average of 5.8 threes per game this season, and players are shooting 43.4% on those shots—6.6% above their season averages. It’s worth noting that this accounts for just 2.5 made threes per game, so one can’t pin all of New York’s issues defending the three on Walker. But his diminutive stature has no doubt allowed for extra three-point opportunities for the opposition.

As aforementioned, it hasn’t been all bad for the Knicks defensively; they are holding opponents to 57.6% shooting at the rim, the lowest mark in the league. Though rim protectors like Mitchell Robinson and Nerlens Noel are spearheading the rim defense, it has been a team-wide effort to contain the rim. But there’s an argument to be made that guys are overhelping. Instead of staying home on shooters, the Knicks guards/wings often provide help and attempt to collapse in on drivers, thus leaving snipers wide open in the corners. With the elite rim protectors New York has, this doesn’t seem like a clever move, and it may be hurting the ‘Bockers more than helping them. The backcourt/small forwards should leave the paint defense to those who do it best and stick to their man on the perimeter—they’d perhaps be better off not gambling for home-run plays, such as getting steals, causing turnovers, so frequently.

This team’s offense is centered on the three-point line

Ranking 27th in the NBA in long-ball attempts last season, the three-point shot was essentially an afterthought in the Knicks’ offensive game plan. They pummeled opponents in the paint with their size and physicality. But head coach Tom Thibodeau and company have now embraced a more modern attack style as New York has evolved into one of the league’s most potent three-point offenses.

JULIUS RANDLE STEPBACK THREE FOR THE FIRST KNICK POINTS OF THE SEASON pic.twitter.com/lNvcHJM7Oh

After averaging a mere 30 attempted threes one year ago, this number has shot up to a whopping 37.5; all the while, the Knicks are maintaining excellent efficiency on these shots. Their collective 36.8% mark from distance is fifth in the league, and they’re the only team in the top five in both three-point attempts and percentage. Though new additions Fournier and Walker have been much-needed shots in the arm for the ascending three-point offense, they are far from the sole reasons for the team’s newfound long ball craze. The Knicks have been able to increase their three-point lethality because of the shooting contributions from players up and down the roster.

Led by Fournier’s 6.4 tries, seven ‘Bockers are averaging at least 3.7 threes taken per contest. More importantly, none of the seven Knicks letting it fly with regularity are shooting worse than 34.5%, which is just a bit below league-average. It’s still very early, but this Knicks team is on pace to put together the best joint effort from beyond the arc in franchise history.

The Knicks are playing an interesting game of push and pull with the three-pointer. On the one hand, teams are flat-out blitzing them from deep, but New York is blitzing their opponents right back. The phrase live and die by the three is serially overused. But if it applies to anyone, it’s these Knicks.

At this juncture, it’s difficult to say whether New York is a better team than they were one season ago with a rejuvenated offense and mediocre defense. But with Thibodeau at the helm, there’s reason to be hopeful that the Knicks will mop up some of their issues defending the three while sustaining offensive success from therein (although players’ three-point percentages may take a slight dip due to the law of averages).