What avenues could New York explore to rid themselves of Noah, and which path makes the most sense for the seemingly-out-of-playoff-contention team?

The New York Knicks’ front office finds themselves in a difficult situation as they consider how to address what has seemingly become a toxic relationship between Joakim Noah and head coach Jeff Hornacek.

After a verbal altercation between the former Florida Gator and the Knicks coach during the recent road trip in Oakland, it appears their relationship is irreparably damaged. With Noah set to earn over $37 million the next two seasons after this one, his value in the trade market is essentially nothing. For the Knicks to seek a trade, it suggests that they feel keeping Noah comes at a significant cost to team chemistry in the locker room.

The Knicks might be stuck with Noah’s massive contract, but they do have options in how they deal with it. For one, I have long lobbied for the team to simply hold onto Noah, assuming the disconnect between him and Hornacek is not so vast that it threatens to disrupt the entire team.

The Knicks are unlikely to find a team-friendly trade or buyout agreement in the near future, so it makes a lot of sense to wait.

Joakim Noah is not Greg Monroe, who recently reached a buyout in the final season of his contract with Phoenix. Monroe is only 27 years old and can still contribute to a contending team like the Celtics. He had incentive to accept a buyout in order to find a better situation for himself (with a smaller contract to slice up, of course). Even Dwyane Wade, at 36 years of age, had a strong incentive to agree to a buyout with the Chicago Bulls, considering it allowed him to join one of his best basketball friends in Cleveland.

Joakim Noah, on the other hand, does not have such an obvious escape destination. By joining another team, he would probably fill a similar role to the one that he holds with the Knicks, as a bench player who provides veteran leadership. Therefore, his incentive to give up a lot of money in a buyout in order to relocate is not very strong.

Side note, since this question often comes up: If Noah agrees to take less money in a buyout, does his original salary still count against the salary cap? A buyout is an attractive option because it allows a player to agree to a reduced salary in exchange for being able to sign somewhere else. That reduced salary is what then counts against the cap. For example, if Noah agrees to be paid $28 million over the next two seasons instead of the original $38 million, that translates to $10 million in savings for the Knicks’ cap.

If the two sides do somehow reach an agreement on a buyout in the near future, the Knicks would be exhausting an asset when its value is likely at its lowest possible point between today and the end of the contract. While this is projecting Noah’s future value, there are strong assumptions that allow us to feel comfortable with this projection. Noah is a 32-year-old, injury prone big man that is unlikely to play very often; therefore, he is unlikely to appreciate his value on the court. Also, the size of his remaining contract follows an inverse relationship to his trade value. As more money is absorbed by the Knicks letting Noah sit on the bench, less money is available to convince another team to inherit in a trade, or less money that the ‘Bockers need to negotiate in a buyout agreement.

While it’s easy for a writer, separate from the team, to say the Knicks should wait out the Noah situation, I don’t know all of the details that management knows. Perhaps there are more locker room issues than what has been reported. Perhaps they were planning on stretching him this summer no matter what, so why not make a last-ditch effort to gain some value in a trade?

If the Knicks are going to trade Noah, and they seem to be holding strong to the idea that they don’t want to attach a young asset (like Frank Ntilikina) or draft pick to get a deal done, then they are going to need to be creative.

What team in their right mind would want to trade for a 32-year-old center with a deteriorating game and a massive contract?

The easy answer would be to exchange bad for bad. The Lakers want Luol Deng off their books and his contract is almost identical in dollars and duration to Noah’s. Why not an even exchange? At least that solves the locker room problem. They could then follow the same decision-making process they had for Noah in deciding the best time to stretch him or ride the contract out. From the Lakers perspective, I don’t see the value in this. Trading bad for bad doesn’t help them in creating more cap space in the near future, so swapping bench-warming, deadweight contracts is shaky.

I have a better idea: why not call up Charlotte and offer Noah for swingman Nicolas Batum? I don’t want to transform this space into a Trade Machine conspiracy theory, follow the logic of why a trade like this would make sense in order to understand how New York should approach their next move with Noah.

Why would the Knicks make this trade?

It’s pretty obvious: Nicolas Batum is a better basketball player than Joakim Noah is right now. Batum is only 29 years old, plays all facets of the game, and mans a position of need for the Knicks. Rather than carrying another big man that is stuck behind younger talent in Kristaps Porzingis and Willy Hernangómez (not to mention Enes Kanter and Kyle O’Quinn), Batum would give the team productive depth on the wing.

While Batum is far from a sharp-shooter, and his field-goal percentage has suffered in recent seasons, he at least can stretch the floor with the propensity to take perimeter shots, another area the Knicks need help.

And as much as Batum could help the Knicks on the court, you would have to think he would be a good mentor to fellow Frenchman Frank Ntilikina off the court. The 19-year-old would surely benefit having another player who speaks the same language in the locker room and to partner with on the road.

By making this trade, the Knicks would be turning an asset with effectively no remaining value into an asset with the potential to contribute.

Why would Charlotte make this trade?

The Hornets, like the Knicks, are desperate to erase the mistakes from the summer of 2016, better known as “the summer new television revenue hit the books and every general manager got drunk off cap space.” It has reached the point that Charlotte might need to depreciate the value of their star point guard, Kemba Walker, by finding a trade that allows them to attach one of their large contracts to him in the deal.

Nic Batum signed a five-year, $120 million contract the same summer that Joakim Noah signed for four years and $72 million. By trading Batum for Noah, Charlotte would be taking back a worse player on a bad contract, but would save approximately $5 million annually in cap space over the next two seasons, and then when Noah’s salary is completely off the books, they would save themselves the final year of Batum’s contract in 2020–21 of $27 million. Charlotte would gain near-term savings and shave off a year of commitment to Batum without having to sacrifice the trade value of Kemba, who is reportedly being shopped. If the Hornets had to include Walker in a deal with Batum, then they would have missed an opportunity to extrapolate the seemingly high trade value of Kemba without Batum’s deadweight contract. Instead, Charlotte would absorb the cost of an inferior player in Noah when shipping off Batum on his own.

If Charlotte is serious about wanting to unload their large contracts, I think they would consider a trade proposal like this one.

What does Batum’s contract do to the Knicks salary cap picture?

By taking on Batum’s contract for the cost of trading Noah, the Knicks would find themselves in a worse financial situation. It’s hard to imagine trading away one of the worst signings in team history and ending up with an additional $38 million in salary obligations. In fact, for most people, the idea of this trade likely ends there. However, an even exchange for Nic could still be an attractive offer to the Knicks. Batum would undoubtedly provide more value on the court over the next few seasons (whether that value adds up to $38 million is difficult to say). And if the summer of 2019 is the main target for having cap space, adding Batum doesn’t necessarily impact their plans.

Besides the rift with the head coach, the entire reason why the Knicks would want to get rid of Noah’s contract is to create cap space—remember, cap space and time move together. The value of cap space fluctuates with the need to have it at a specific time. If Enes Kanter opts in (logically), even without Noah (and there’s no plausible scenario that has the Knicks trading him for expiring contracts), the team would still be several moves away from creating enough room to sign a significant player during the 2018 offseason. More importantly, the list of free agents this July (with the exception of a very select few) is not as attractive as it is in 2019, when hopefully New York builds itself into a more balanced team and attractive destination.

So while Batum might earn more money than Noah over the remainder of this season and in 2018–19, it’s irrelevant to the discussion of 2019–20 when having cap space becomes more desirable and realistic to the Knicks. And at that point, the Knicks would face a decision with Batum similar to what they face today with Noah. 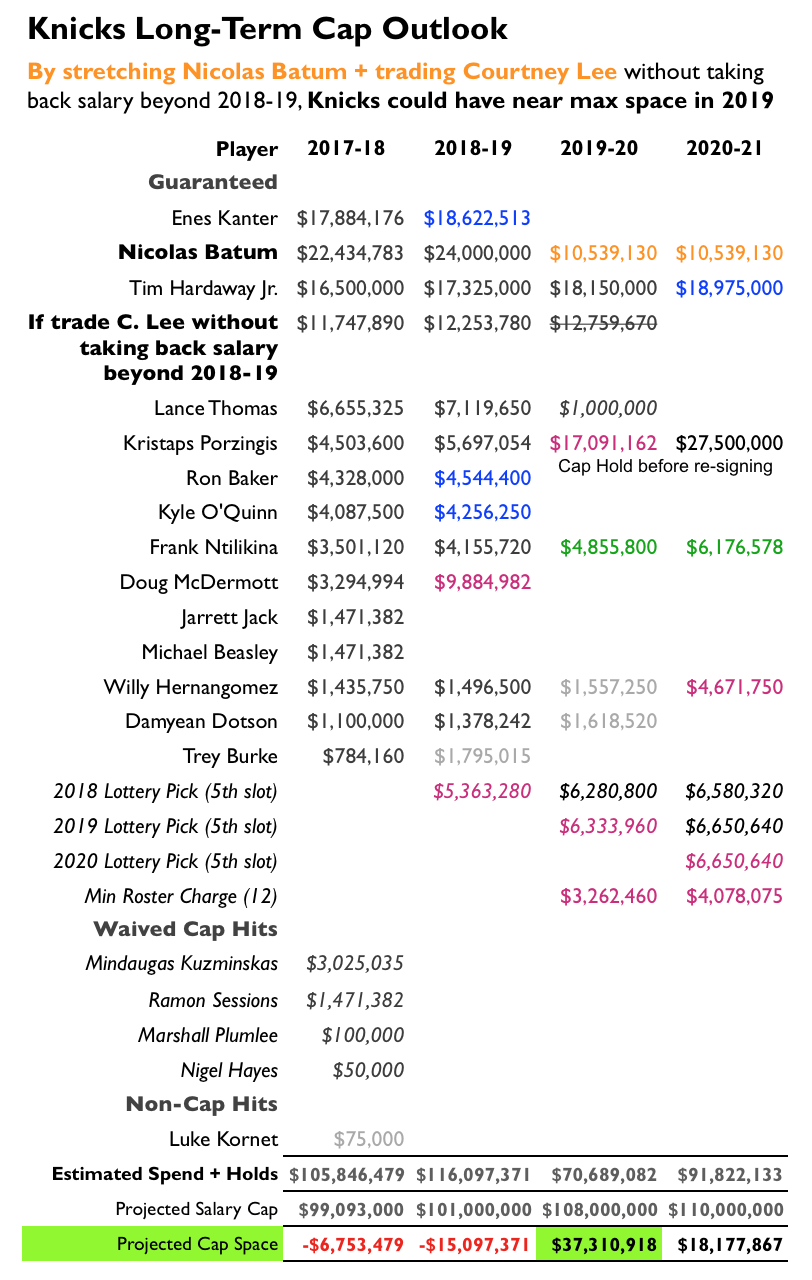 The table above is important not just to this hypothetical trade discussion but for understanding why it would be prudent to wait until 2019 to stretch Noah’s contract.

When a team decides to stretch a player’s contract, they essentially are reducing the short-term cap hit by spreading the remaining value of the contract over twice the remaining years plus one. For Noah, if the Knicks stretched him this summer, that would equate to a $7.5 million cap hit over the next five seasons. That would save about $11 million in 2018–19, which is not nearly enough to make a difference due to the uncertain commitment of Enes Kanter’s player option.

Once Kanter comes off the books in 2019, the Knicks could then create max cap space simply by trading Courtney Lee for contracts that expire before that summer and by stretching Noah (or Batum) at that time. The table above shows the scenario with Batum’s contract, since it is larger than Noah’s, and to prove why acquiring him in a trade doesn’t necessarily impact their free agency plans in 2019. Using a projected $108 million salary cap, a max contract (35 percent of the cap) would be $37.8 million, or right around where the Knicks could reach.

There’s no way around it. Exchanging Noah for Batum doesn’t fix the Knicks’ financial situation; since it’s unlikely a willing team is going to absorb him into space for free, any Noah deal will require attaching a large salary to New York. But rather than selling off Noah for five cents on the dollar by agreeing to a buyout on less-than-cordial terms, or attaching a draft pick to trade him, a trade like this one offers a creative solution with long-term goals firmly in mind.

The Knicks have a daunting task in front of them as they try to resolve the Noah situation. Hopefully, like the suggestion above, the Knicks find a creative way of biting the proverbial bullet and coming out relatively unscathed.

Which Pending Free Agents Do the Knicks Prioritize?

How RJ Barrett Emerged From Inconsistent Rookie to Breakout Sophomore