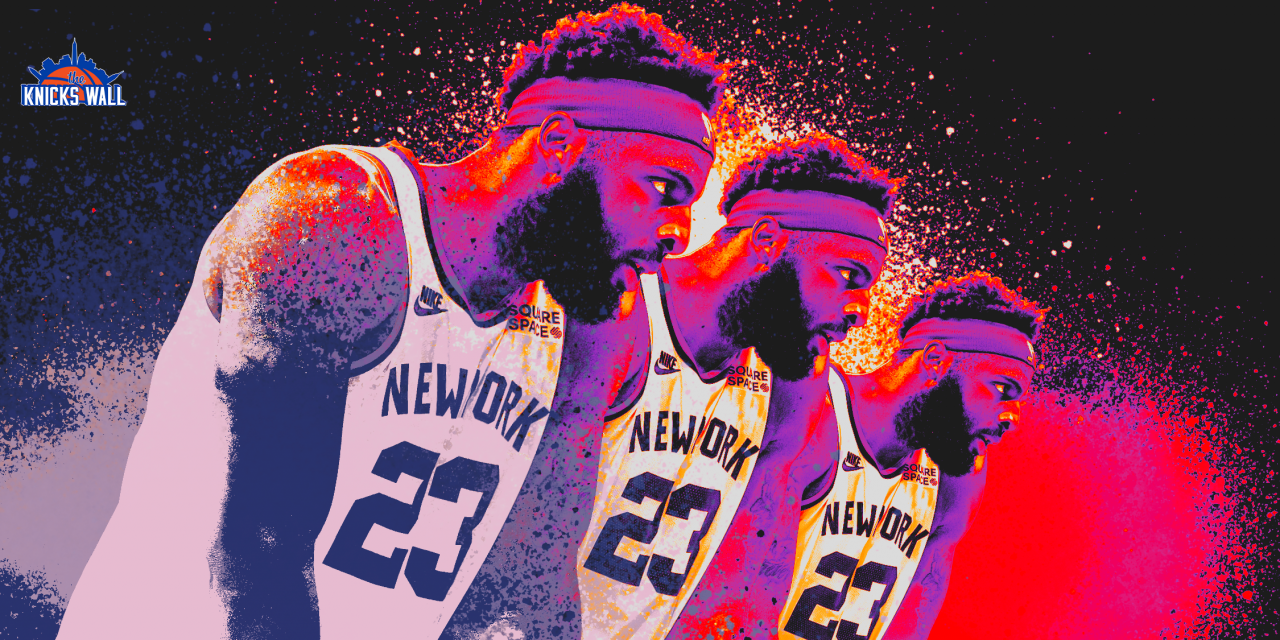 Mitchell Robinson will be a prized unrestricted free agent this offseason. It would behoove the Knicks to explore ways to maximize his value in the event the center wants to leave the Big Apple.

Remember your first car? Mine was an early-’90s white Oldsmobile Cutlass Ciera. Its interior was suede, and my god was it maroon. Practically every single bit of it was an eyesore; to me, it was the most beautiful thing in the world. I drove it everywhere, through everything, and above and beyond every speed limit. It made me feel like a superhero. I like to think I made it feel more alive than it ever had been before.

At a certain point in time, though, we all have to move on, because that car becomes too expensive to continue driving. You begin to put more money into it than it’s worth; it’s a wound that won’t stop gushing blood, yet you continue to slap Hello Kitty! Band-Aids on top of it, as if that is going to do anything. And yet, just because it’s not a car you’re getting use out of anymore doesn’t mean someone else won’t. Sometimes, people are in a pinch and just need something to get them from Point A to Point B. It’s a vehicle you can categorize as effective, albeit risky. So, you grin and bear the heartbreak, and you say goodbye, hoping that it serves someone else the way it served you for so long.

Mitchell Robinson reminds me of that car. He’s useful and productive as a pure center, a dying industry being spurred on by players of his ilk. But he’s injury-prone. He’s a question mark as it pertains to maturity and fit in his current home. And for the Knicks, a team that should look to rebuild as efficiently as possible, perhaps Robinson shouldn’t be part of the team’s long-term plans, especially considering the contract he’ll likely garner from interested suitors.

Who are those suitors? We took a look at two sign-and-trade possibilities that benefit both Robinson and the Knicks almost immediately.

Option No. 1: The flashy pipe dream

You could’ve been fooled into believing that the postseason emergence of Dallas Mavericks guard Jalen Brunson practically placed him on the Knicks. With Luka Doncic sidelined for the first three games of the Mavs’ first-round series against the Utah Jazz, much of the scoring burden fell on Brunson. He answered the call and then some, not only handling the weight placed on his shoulders in those first three matchups, scoring 24, 41, and 34, respectively, but averaging 27.8 points, 4.8 rebounds, and 4.2 assists over the course of the six-game series. Brunson followed that up with a much more pedestrian effort against the Suns, but by his typical standards—especially given that Doncic had returned in full—he was effective, scoring 18.7 points per game on 45% shooting in Dallas’s seven-game series win over Phoenix. He was electric for 13 consecutive playoff games. That’s not nothing.

When he fizzled ever so slightly against the Warriors—still averaging 18.0 per game, just on a less-prolific clip and against a dominant opponent—the damage had been done. Brunson had branded his name at the top of the summer’s looming free-agent rankings, and if he wasn’t at the top, he was damn close.

The score-first guard will likely go to the highest bidder if it’s money he covets. But if it’s the opportunity to rebuild a team from its early stages as a potential contender down the line—and to work with his father as a sweetener—the Knicks would almost certainly be willing to pay up. There are issues with Brunson’s game that need ironing out before he can be a true asset to a contender, but he could be a dream fit with a Knicks team that could use a playmaking point guard in a prime position for a full-time starting job. He’s not a good spot-up shooter, but he can create off the dribble, either his own shot or a drive-and-kick opportunity for one of New York’s younger wings. RJ Barrett is already drooling at the concept.

And given that their contracts will both likely surpass top-dollar whenever they become finalized in the offseason, Brunson and Mitchell Robinson make for a fitting swap. Not only that, but the Mavericks—evidenced by their collective inability to outrebound their postseason opponents—are in the market for a true center who warrants starting minutes. Apologies to Dwight Powell, but any team would be willing to insert 8-to-10 rebounds and two-plus blocks per game for five and 0.5.

It’s fair, and it benefits both sides. Who says no?

Perhaps the Mavs do. Sources told the New York Post‘s Marc Berman that “center-starved Dallas is not expected to be interested in Robinson at his hefty price tag (at least $11 million per) and has set its sights on cheaper free-agent centers.” About that, though: other than a secondary scorer to buoy Luka’s superpowers being hindered by Doncic-focused defenses, the thing keeping Dallas from a Finals berth was likely their lack of a true center. The Knicks have bigger fish to fry than adding yet another backcourt presence, but if Brunson’s flashes of greatness were any indication, he’s worth the coin.

In addition to reporting that the Mavs had no interest in Robinson’s potential price tag, Marc Berman also reported that “the Bulls are continuing to do their research on Robinson ahead of the free-agency period that will begin July 1st. The Bulls could be the main competitors for Robinson if the Knicks don’t lock him up to a contract extension on June 30th.

“The Bulls want to enhance their interior defense and believe Robinson could be a good fit slotted alongside offense-minded center Nikola Vucevic,” Berman continued. “Chicago reportedly has $49 million in cap space, but that’s before they commit to their own free agent, Zach LaVine—if they commit.”

First things first: the Bulls shouldn’t commit to LaVine. The cost, which will likely border on making him one of the league’s highest-paid guards, isn’t worth the production. A team out there will pay LaVine an inordinate amount of money. It should not be the team that just finished the 2021–22 season as the sixth seed in the Eastern Conference and should be looking to capitalize on a window in the NBA where it seems like anyone can contend at any time. Carry on.

But back to the Knicks. What if both teams could benefit? What if the Bulls could use a much smaller chunk of their available cap to add that defensive threat alongside their defensively-inept center, the aforementioned Vucevic? And what if the Knicks could bring in a solid backup center in Tony Bradley, thus saving them some money for a more long-term solution at the position once Nerlens Noel’s days in New York become numbered, plus a much more exciting entity in Patrick Williams, the still-unproven youngster whose opportunities may be waning given the demands that Vucevic, LaVine, and DeMar DeRozan all have in terms of game-to-game touches? The Bulls may not be overly eager to part with a young piece like Williams, but he has his own share of injury questions, so Chicago’s brass might have little to no interest in committing to his formative years, especially considering the fact that he’ll inevitably become more expensive down the line.

Frankly, the Knicks are always in the market for two-way forwards, and the Bulls are in need of a center who can send back a shot, let alone pull down a rebound. This works, and it makes sense all around.

»READ: What can the Knicks learn from the 2022 postseason?