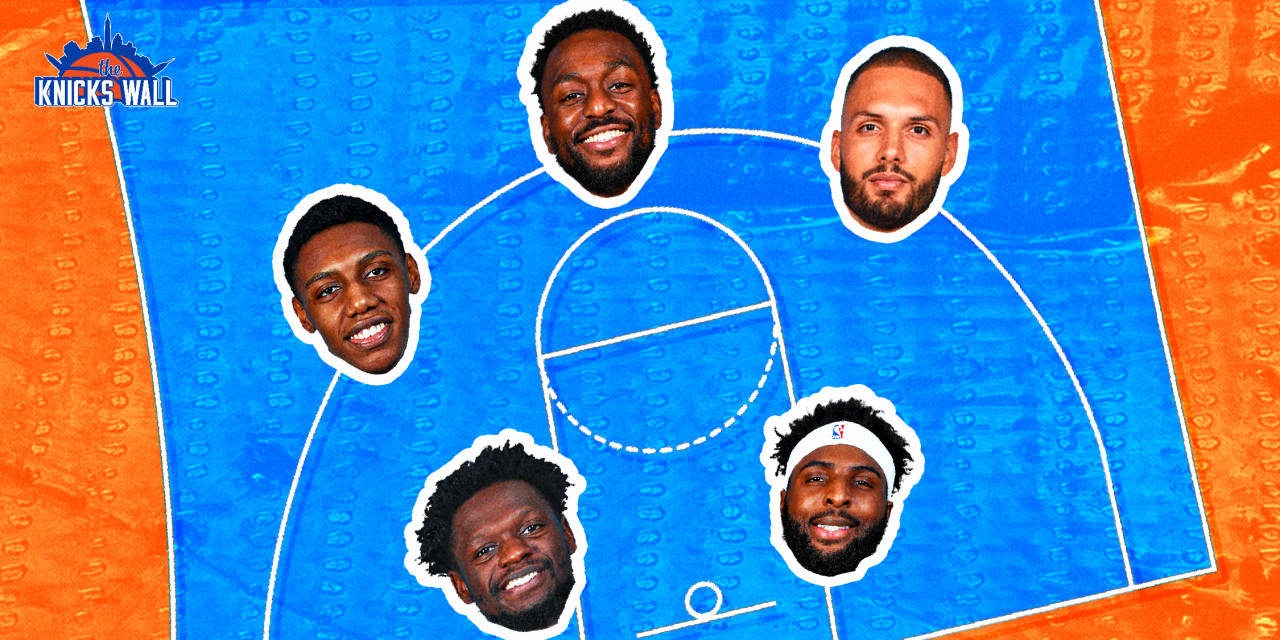 Thanks to some shrewd moves from the front office, the Knicks can utilize a multitude of skill-focused lineups this season. Let’s check out some ideas.

A fun fact about me: every so often, I’ll run with one lineup and one lineup only in NBA 2K. For fun – and not at all sociopathically – I’ll disable fatigue and see how one specific skill-based rotation performs against another team’s starters. For those who don’t know, NBA 2K has some preset lineups built for every team; those lineups may feature the team’s best defenders, shooters, their starters (and, inversely, the first five off the bench), and so on. I think it’s interesting – and fun – to see how effective those somewhat unrealistic lineups might fare against the dudes who will actually see time together.

The lineups aren’t always unrealistic. Plenty of coaches roll out defense-centric fives; even more toss out their best shooters when the game is close and time is of the essence. With this exercise, I’ll be looking at how the New York Knicks might handle lineup construction in specific situations. Is it a close, back-and-forth contest? Need a three or a stop, and fast? Is the opposition rolling with a group all standing shorter than 6-foot-9? All will be accounted for below. Just don’t tell Tom Thibodeau; he’s doing great work, and though I’ve been adamant that he can improve, the last thing I want is for him to show up on my doorstep asking for the launch codes (or forcing me to run).

Just as a heads up: you may see some names repeating, appearing infrequently, or missing altogether. I couldn’t exactly find a solidified spot for Derrick Rose in any of these lineups, nor did I find room for Kevin Knox, Dwayne Bacon, or any other guys that will probably be found further down the bench than others. Obviously, that does not mean they won’t play or can’t fit in a lineup I’ve listed below. It just means that I dreamt up a different unit to thrive in these scenarios.

It feels obvious, but the common misconception with “small ball” lineups is that they must merely be made up of shorter players. Not so. Sure, the players must be on the smaller side, or else the name of the lineup is moot. But there must be some basketball sense to the mixture. You can’t just throw out the five shortest guys on the team and tell them to go nuts.

That’s where I came up with this group, one that I believe to be about as well-rounded as any Thibodeau could comprise with the roster available to him. With IQ, you have quickness, defensive dexterity, and budding scoring ability. Kemba brings less intensity on the defensive end than you’d like, but in Thibs’ system, I’m intrigued to see what he can muster; at the very least, we know that a healthy Kemba can have the offensive burst of a human lightning bolt on Ritalin.

Burks and Barrett provide streaky shooting and sporadic scoring. They’re also solid defenders, and though they’re better at making frantic rotations than they are on the ball, history proves they can handle whatever small-ish opponent is sent their way. And Randle makes this lineup for a couple of reasons: he’s the team’s best player, and it’s often forgotten that he’s a mere 6-foot-8. He’s a Kevin Garnett wannabe in a small forward’s body. It’s a thing of beauty for a lineup like this.

“Size” is a funny way to qualify a lineup. What does it even mean? Is the lineup tall? Is it burly and/or stocky? Is it both, thus creating a sort of Hulkian blockade for opponents to find themselves staring down in the dying embers of their basketball lives?

This lineup has a bit of everything. Offensive burst? Got that, thanks to Barrett, Fournier, and Randle. Springy youth? Got that, if  Dunkers Delight Jr. has anything to say about it.

OBI TOPPIN IS RELENTLESS AND I LOVE IT pic.twitter.com/wuJMx6fgUq

Then there’s the center spot, which Robinson or Noel can fight over. The seven-footers both have their downsides – Mitch can’t stay healthy; you never know what you’ll get offensively from Nerlens – but they bring consistency as rim presences. Rebounds, blocks, and all the rest come aplenty when one of those two linger near the restricted area. Attacking the paint is likely a losing battle against this crew; stopping them in their own paint sounds about as fun as go-karting on a track made of quicksand.

This was easily my favorite lineup to ideate and construct. For one, it’s the lovechild of Thibs and another Thibs. It’s also, in my unpopular opinion, more fun to analyze defensive ability than it is offensive. I’ll take six hours of Andre Roberson film over 20 minutes of Kevin Durant highlights. Call me sick; call me insane. The important thing is that I know I’m right.

Which is how I know this lineup is a no-brainer, top to bottom. If you watched even a second of Summer League, you watched in real-time as Miles McBride ascended into immediate consideration for inclusion in the Knicks’ defensive rotation, beginning on day one. He showed versatility, agility, persistence, and stamina throughout play against lesser competition, but NBA competition nonetheless. He often looked like he could stop a wild ostrich if it came between him and a roster spot.

Case and point. Sure, I might be going off a small sample size, one that came against less-than-elite opposition, but I’m gonna roll with this gamble. This is my way. This is how I win.

Last season was a defensive coming-out party for Barrett and Burks, both of whom Thibs can now certainly trust in his somewhat heavy-on-doubles, ever-denying defensive scheme. Barrett took on defensive assignments far beyond his pay grade at times, while Burks could effectively act as a pseudo-traffic cop at times when the defense needed to readjust to respond to an opponent’s rapid ball movement. The latter happened to have the team’s third-best individual defensive rating last season at 104.6 (among players who played at least 10 minutes per game). The tandem ranked second and third on the Knicks, respectively, in defensive win shares.

been looking at the knicks defense a good bit for part of a piece running tomorrow on @TheKnicksWall, and I've become smitten with rj barrett's very visible defensive growth. he takes on any assignment, knows when/how to rotate and stay square. best of all: he can be SO patient. pic.twitter.com/CWseYKoFWM

I threw Quickley and Rose into the mix because of how much they grew on defense over the course of the last year, too (second and fifth on the team in defensive rating, respectively; Rose was fourth in defensive win shares, and aptly molded his game to best fit Thibodeau’s system as the season went along). With Rose re-signed and Quickley looking to be someone the team can include in their framework long-term, the guard position in New York seems to be sitting pretty.

Then come Gibson and Robinson. The latter is an obvious choice, while Gibson – a seasoned vet albeit a sometimes shaky one – is the team’s third-best rim protector, its scrappiest paint presence if not its strongest, and he’d be a pivotal veteran to include in this lineup. I especially value the fact that on a team with better switchers, on-ball defenders, and most certainly scorers, Taj led the squad in plus-minus (2.9).

I fantasize about watching this lineup hold teams to 82 points on a nightly basis.

I feel like building a lineup designated to set the net on fire without MSG’s own Kemba Walker leading the way is a borderline imprisonable offense. And as I mentioned earlier, when he’s hot, he’s unconscious. The same goes for Burks, Fournier, and Randle, three players who can stroke it in even the tightest coverage – well, at least the hope is that this remains true for Randle. Ideally, a fluke last season was not.

My favorite cog in this machine, much like fellow rookie McBride in the defensive set, is Quentin Grimes, who shot a blistering 41 percent from three in college and shows absolutely no signs of slowing down. He was an offensive force with Houston, first and foremost, one of only two players who made their way into double figures in the Cougars’ forgettable Final Four outing against eventual champion Baylor last year. But on the NBA level, he could be positioned as a marksman and consistent shot-creator, almost like a Reggie Bullock-Rudy Gay hybrid (though he’s quicker than both). I like Grimes a lot; he’s an All-Rookie sleeper for me, and his shooting may very well be the catalyst in that quest.

This one’s just for fun. And this lineup’s title speaks for itself: Let ‘em play, for the love of JD & the Straight Shot. “Wash away my troubles, wash away my pain… With the rain in Shambala.”