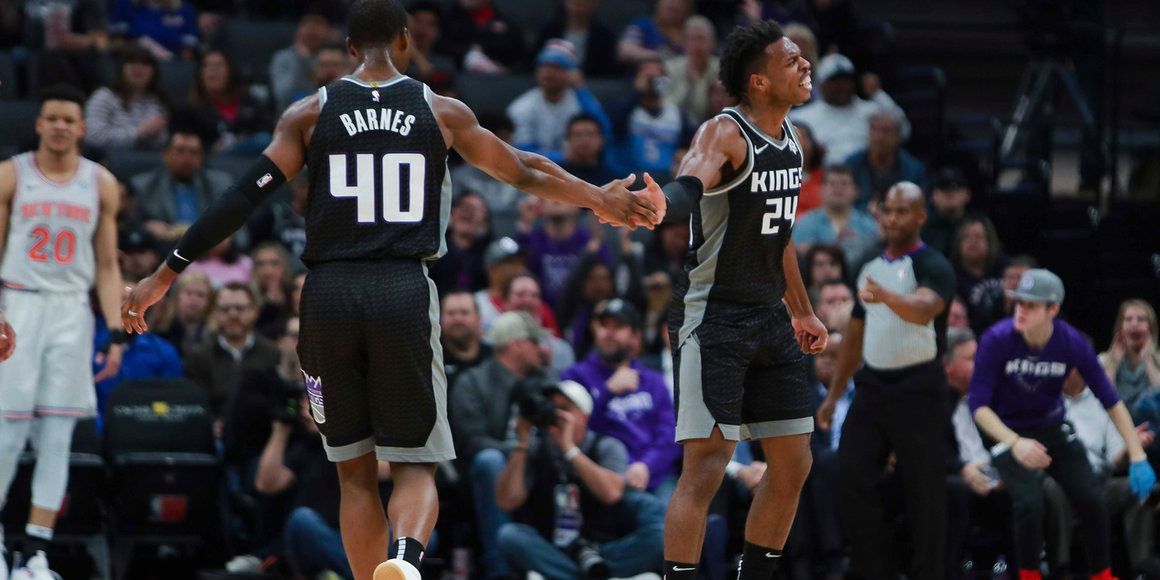 Despite a much improved effort, the New York Knicks came up short in a 115-108 loss to the Kings.

Coming off of a pathetic effort against the Clippers—in which Coach Fizdale called out his team for playing like they were still in bed—New York (13-51) showed up tonight and battled against a solid playoff-caliber team in the Sacramento Kings (32-31) and just were unable to get over the hump after keeping the game within reach for most of the night.

New York did a very good job on half of the Kings’ young backcourt tandem, holding sophomore phenom De’Aaron Fox to 16 points and preventing him from wrecking the game with his speed and penetration ability. However, Buddy Hield, the second portion of the Kings’ deadly guard duo, had himself a night with 28 points, six rebounds, and seven assists. Hield continues to build on his career year and did an excellent job of exposing the Knicks’ terrible perimeter defense.

Recently-acquired Harrison Barnes was a thorn in the Knicks’ side as well this evening, knocking down three triples en route to his best performance as a King with 22 points, while former first-round pick, Harry Giles, chipped in 17 points off of the bench.

All evening, Sacramento was able to hit timely shots and take advantage of the Knicks’ 17 turnovers. The Kings rank second in the NBA on points off turnovers per game and were able to turn those Knicks mistakes into 26 points of their own.

After hitting somewhat of a rookie wall during January and February, Allonzo Trier has begun to return to form, putting up 29 points Monday evening off the pine. Trier was very aggressive against an athletic and pesky Kings defensive backcourt and has seemingly grown increasingly more comfortable with his three-point shot. The 23-year-old was the only one on the Knicks who really stood out this evening and was the reason why they were able to hang around for so long.

Sometimes Trier’s shot selection has you scratching your head, but tonight he played smart basketball and was an efficient 8-of-16 from the floor. Trier understands that teams are beginning to game plan for him now that they have more tape on him and know he is to be taken seriously. Credit Iso Zo for making adjustments to his game and constantly keeping opposing defenses on their heels with his attacking style of play.

Gotta love when the 3’s start to fall pic.twitter.com/4CQSbuKvu6

Kevin Knox’s rough patch continues as the rookie didn’t see any game action in the fourth quarter of tonight’s close game. Knox, despite making 66 percent of his shots and not turning the ball over, has looked uncomfortable and a bit timid on the court, similar to his first few months in the Association. He only attempted six shots in 21 minutes, and it is very difficult to get into a rhythm when you’re not shooting that much in your time on the court.

The rookie from the University of Kentucky has not shot the ball with any confidence and doesn’t seem to be absolutely sure what to do or where to be when he doesn’t have the ball in his hands. Attributing Knox’s struggles to his youth and inexperience is probably the most sensical thing to do at this point, but it’s time we see more from the lottery pick as the season winds down.

Knox’s field-goal percentage has dipped to 36 percent this season. He has been given every opportunity to improve and seemingly has plateaued, looking like the third-best Knicks rookie this season. We all know what Knox is capable of, and hopefully he can regain some of the midseason swagger we saw from him not too long ago.

The Knicks wrap up their West Coast swing on Wednesday in Phoenix against the Suns—who just defeated the Lakers and Bucks, temporarily cementing the Knicks with the worst record in the league.