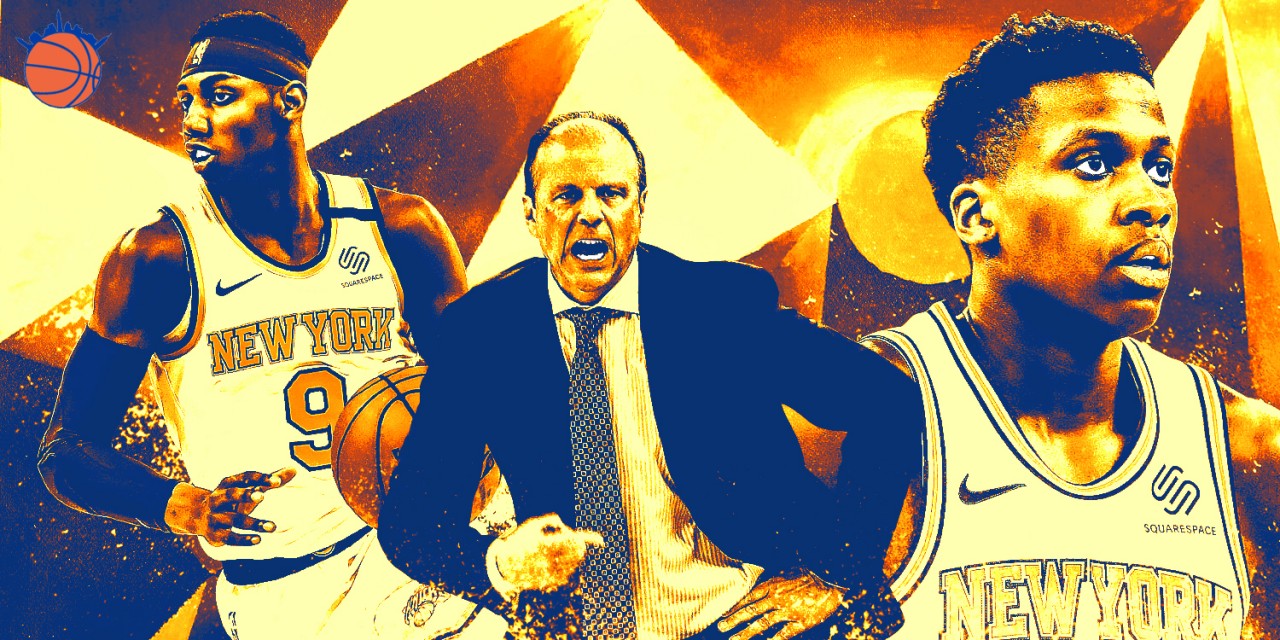 The future remains uncertain as the Knicks hit the homestretch amid yet another franchise transition period. Here’s what to expect in the final months.

After another tumultuous and frustrating first half of the season that included a change of president, head coach, and top scorer, the New York Knicks (17-38) head into the homestretch with the majority of its players and coaching staff uncertain about the future, and with no playoff spot to conceivably compete for. At least they’ve matched last season’s win total—progress!

But besides that, everything is great.

There are few things to look for over the final 28 games of 2019–20 season—besides whether they hit their preseason over/under of 27.5 wins or not (don’t count on it). Let’s highlight a few.

Who will get minutes?

The combination of young players needing developmental minutes, veterans on short-term deals, and a new front office evaluating everybody complicates matters. Knicks fans have been clamoring for more opportunities for the 22-and-under guys—and that should absolutely happen. Offloading Marcus Morris was a good start. Buying out Wayne Ellington would be productive, too.

Elfrid Payton and Reggie Bullock have played respectably and could have a valuable backup role with the team going forward. Both have non-guaranteed deals for next season—$8 million for Payton, $4.2 million for Bullock. Payton’s playmaking and stingy D have been a net positive, but his shooting ineptitude caps his ceiling at “good backup.” Bullock’s shooting has cooled but his perimeter defense has contributed to the team’s recent improvement on that end—they’re sixth in Defensive Rating over their past 15 contests. Still, even if they remain in town, both players are more or less finished NBA products—they don’t need a 28-game tryout.

The Knicks employ three players with team options for next season (Ellington, Bobby Portis, and Taj Gibson), and three impending unrestricted free agents (Maurice Harkless, Allonzo Trier, Damyean Dotson). There’s almost no chance Portis returns at $15.8 million—he’s played mediocre ball all season and hasn’t exactly set a pristine example. A struggling Kevin Knox should be getting the bulk of Portis’ minutes the rest of the way.

Gibson is well-respected but is also unlikely to be brought back at $10.3 million. Let’s see how long Miller can last before finally inserting Mitchell Robinson into the starting lineup.

In general, there’s simply no reason for soon-to-be free agents to soak up minutes at this stage. Knox, Frank Ntilikina, and Dennis Smith Jr. have all averaged 17 minutes per game or fewer under Miller, far fewer than Ellington, Portis, and Payton. That pattern has stayed the same in the three games post-Morris’ departure.

The forthcoming regime should want more looks at Smith Jr., Knox and Frank, in particular (though both will be back next season). Knox has completely regressed—putting up just 6.8 points per game this season and often looking completely lost. Frank, while displaying glimpses of confidence, is still a long way from putting it all together and become a half-decent offensive player. Still, he and DSJ are lacking in offensive confidence, and allowing them one extended stretch of consistent, hearty minutes is only fair. Smith has had an especially rough year on and off the court, and could really use a positive finish to a disappointing season.

Unfortunately for Miller, it’s now basically public knowledge that the new front office will be bringing in their own head coach (maybe Tom Thibodeau, not Jay Wright), so it would be nice if Miller let the kids loose. On the other hand, I completely understand him wanting to put the best possible product on the court for his own resume.

Other than a miracle playoff push, R.J. Barrett finishing his rookie season on a high note would be the most encouraging possible development over the final six weeks. After a strong start, Barrett’s shooting woes and sprained ankle (he missed nine games) have mired his first season.

Still, there’s plenty to be excited about (beyond just his Rising Stars Challenge performance), and it would leave everybody feeling good if he went into the offseason making shots. As The Athletic’s Mike Vorkunov pointed out, R.J. owns one of the lowest eFG% of any rookie in the last decade to play at least 35 games at 10+ minutes per game. His 46.7% True Shooting percentage is historically bad for a top three pick. In his defense, the Knicks are once again abysmal at shooting threes with terrible spacing. That doesn’t put him in the best position to finish at the rim, where he’s struggled: converting just 43.5% of his layups and 43.8% of shots from less than eight feet. Hopefully, better spacing and ball-movement should come sans Morris. The 2019–20 Knicks are also one of the worst free throw shooting teams of the century, and Barrett (61.1% FT) is a culprit in that department as well. News flash: the Knicks are bad.

Julius Randle has struggled to be an offensive focal point, but his field goal percentage and points per game has gradually improved over the past 20 outings. Like Barrett, he’s struggling mightily from beyond the arc, regressing to 26.4% this season, despite the fact that basically all of his looks have been open. Randle should either pull a Westbrook and forego threes entirely—or he just has to make them. I’m sure the new front office wouldn’t mind if he raised his trade value with some solid play heading into the summer.

Randle and Barrett’s shooting will be especially crucial in lineups with Robinson. If these three are going to be the centerpieces for the foreseeable future, they’re going to need to find a way to gel, and one of them is going to need to be a more dependable shooter and spacer. Lineups with all three haven’t gotten a ton of run together (especially without Morris), and have produced an unremarkable Offensive Rating of 103.1 with a -8.0. In the three games since Morris was dealt, Miller has put all three on the court together for just 17 total minutes that still garnered a very bad -8.4. The frequency and effectiveness of Barrett/Robinson/Randle combinations is something to note down the stretch.

Will the Tank Be On…for LaMelo?

How far will the Knicks slide? Pivoting to the young guys isn’t shameless tanking—it makes long-term developmental sense for the final third of a season in which they genuinely tried to win. I am personally rooting for the neophytes to actually play good ball and rack up some feel good W’s, but moving up in the lottery is certainly not a bad outcome.

If you start to see a lot of Dotson (this should happen), Trier, Kadeem Allen, and even some Ignas Brazdeikis, that may only increase the chance that you also see LaVar Ball sitting alongside James Dolan at the Garden. The Knicks currently trail the Atlanta Hawks (15-41) by 2.5 games for a top-three worst record, and Tankathon has the Knicks fifth in the running for a top-three spot.

On that note, it would be a nice late season boost of entertainment to see Kenny Wooten get a shot. The social media sensation earned a two-way contract, in part to keep him off other teams. The team might rather have him rack up reps in Westchester, but like a September call-up, it can’t hurt to give him a taste of the bigs.

Will we hear any more from the front office?

Longtime CAA agent Leon Rose is widely expected to take over as Knicks president, though we’re still awaiting an official announcement. Assuming that happens and he holds a press conference, it may give us a chance to hear Rose outline his agenda to some degree, including who he might bring on board.

Worldwide Wes will reportedly not be joining the team, though Grizzlies current vice president Rich Cho may be in line for a gig. New York hoops legend and current G League executive Rod Strickland could also join the fray.

Hey, as long as we can get through the final 28 games without another statement via @Knicks_PR, then that’ll be a success unto itself.