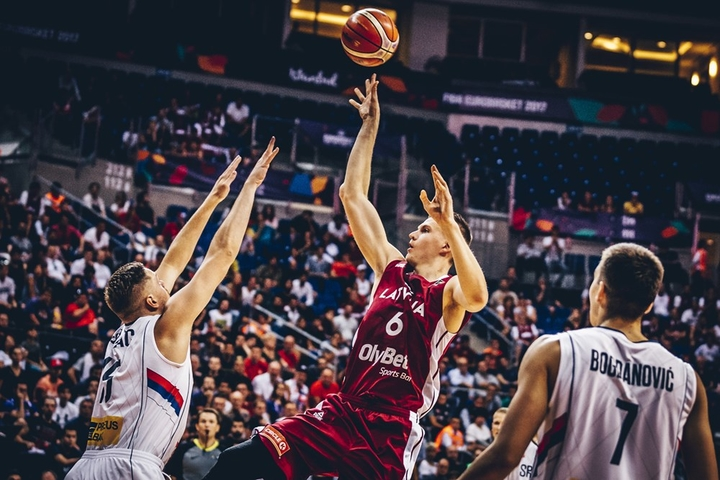 While the Phil Jackson era Knicks were surrounded by an overwhelming amount of failure, ineptitude, and sadness, one thing the franchise did well in recent years was add foreign talent to the roster.

New York’s scouting department has done a great job of adding European players to the team through the draft and free agency, most specifically Kristaps Porzingis, Willy Hernangomez, and Mindaugus Kuzminskas, all three of whom are currently participating in the 2017 EuroBasket championship, a European tournament held by FIBA every four years.

The tournament is currently wrapping up its group phase, in which teams attempt to qualify for the single-elimination Round of 16.

Let’s take a look at what our EuroKnicks have done so far in the early stages of the tournament:

KP’s Latvian team remains locked in a three-way tie for first place in their group with Russia and Serbia with a 3–1 record. Latvia is in good position to finish in the top four and advance to the Round of 16, however, a loss in their final game against Turkey and a few wins from their opponents could bump them out of qualifying.

HIGHLIGHTS from #EuroBasket2017: @kporzee with a game-high 28 points!

As for Kristaps, he’s been one of the tournament’s best players so far. In a more ball-dominant role he’s been able to show off his passing and handling and score the ball dominantly.

KP is currently scoring 21 points per game, good enough for the fifth highest points per game average in the tournament, on 49 percent shooting as well as averaging 1.8 blocks per game, trailing only Marc Gasol.

Porzingis is emerging as a premier European talent among his peers.

Playing alongside an all-time FIBA great in Marc Gasol, Willy Hernangómez has helped the Spanish national team go undefeated in the group stage and qualify for a spot in the Round of 16.

Playing in a more pass-oriented system, Willy has moved the ball surprisingly well, frequently making the extra pass to the open player. With the Triangle offense finally out of the Knicks’ playbook for good, it’ll be interesting to see if Willy continues this pass-first style of play in Coach Hornacek’s offense.

Hernangómez is currently averaging 9.5 points per game on 48 percent shooting from the field as well as 9.5 rebounds per game, the third highest in the tournament.

While Willy hops off the pine for the elder Gasol, the young Spaniard is filling in the All-Star’s shoes quite well.

As for Kuz, his Lithuanian national team has secured a spot in the Round of 16 with a 4–1 record, and will face the team with the fourth best record in Group A.

Kuzminskas has played the role of leading scorer for Lithuania, averaging 14.4 points per game on 48 percent shooting from the field as well as shooting 37 percent from beyond the arc. Kuz has shown off some of his athleticism in the tournament, pulling off a few unexpected dunks and using his speed to get out and run on the fast break.

At nearly 28 years of age, Kuz is a bit older than KP and Willy, and has shaped his role amongst European players over the years, having plenty of time to bang around against his FIBA EuroBasket opponents.

There’s plenty more to come from these guys in Europe, and hopefully they’ll come stateside with the same competitive intensity when the NBA season commences.