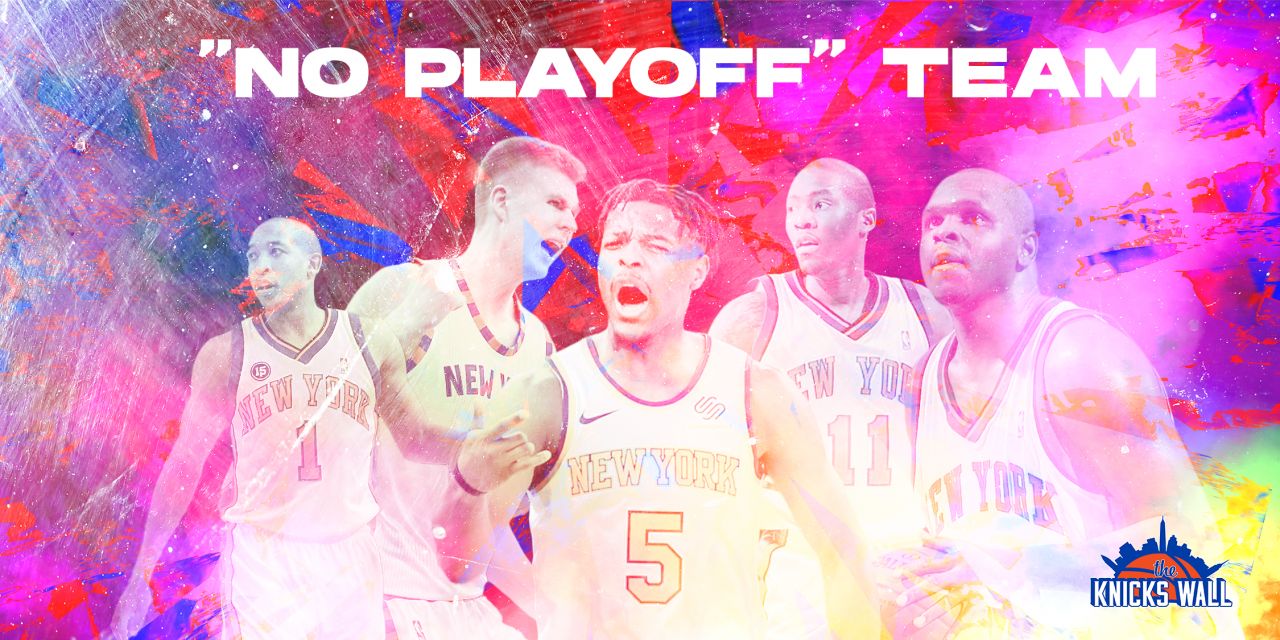 The Knicks have largely been losers over the last 20-odd years, but our staff does their best to find the winning combination.

In case you’ve been living under a rock for the last two decades, this millennium has not exactly been kind to the New York Knicks. In the 22 years since the turn of the 21st century, the Knicks have made the playoffs six times, with only one of those appearances going past the first round.

But we’re not here to wallow in self-pity or re-litigate past failures. What we’re here to do is weave gold from straw, turn lemons into lemon bars (a far superior product to lemonade), turn dung into fertile, life-giving manure. We’re here for the first annual (maybe) Knicks No-Playoffs Mock Draft!

The rules are simple: to create a ten-man team using only Knicks players since 2000 who have never played a minute of playoff basketball in the Garden. Add for good measure a star to play through with the starters and a sixth man to do the same with the bench, and you’ve got yourself a stew. As for who will be crowned the King of the No-Playoff Knicks, that’s up to you!

So without further ado, let’s meet the teams!

Just like my team name, I tried to create a team that could make a play-in with no playoff Knicks on a good year in a weak Eastern Conference. That said, the players I drafted are not particularly special and would be lucky to win more than 35 games in a single season.

One thing that’s particularly sad about this is that there have been far worse Knicks teams over the years. For my first pick, I decided to go with Chris Duhon, the only semblance of a reliable starting point guard in a carousel of players that have held that position to no avail. Duhon had his best NBA season with the Knicks and holds the team record of 22 assists in a single game. My starting shooting guard is Evan Fournier. It was very slim pickings but you need a 2-guard who can shoot and for all his shortcomings, when he’s hot, he’s hot. My small forward was a fantastic player in his heyday day but only spent a short time with the Knicks, just 47 great games in his stint. I give you a legendary New Jersey Net, a straight hooper, Keith Van Horn. Next up at power forward, at one point the longest-tenured Knick, a hometown kid, Brooklyn’s very own Lance Thomas. He isn’t particularly spectacular at anything but the man does not stop. And finally at center, the lesser half of one of two sets of NBA twins, Robin Lopez. RoLo came to New York as a quirky part of a quirky team. He’s dependable and you can always count on that baby hook inside the paint.

My bench needs no introduction because it’s full of dogs. Deuce McBride is going to be on you 94 feet, and you don’t want to leave him open either. Justin Holiday of the famed Holiday family. He’s not his brother Jrue but he’s a serviceable backup that’s going to give you some points and maybe steal a ball or two. Backup 3: Trevor Ariza. Before carving out a nice career for himself, the Knicks drafted Trevor as a teenager back in 2004. Next up, the artist formerly known as Ron Artest, the one and only Metta World Peace. This man needs no intro, the Knicks passed up on him back in 1997 but made it right and brought him home in 2013, Queensbridge stand up! And finally more power and more toughness. Backup center, a bruiser and enforcer, and definitely not scared of John Wall, Quincy Acy.

As someone who practiced the shake-and-bake on many a cold Long Island night growing up, Jamal Crawford was always going to be my first pick. Snagging David Lee in the third round felt almost too good to be true; he joins a small-ball starting lineup featuring Nate Robinson, Crawford, Courtney Lee, and Danilo Gallinari. Coming away with both Doug McDermott and Kyle O’Quinn to headline the bench unit was a heist. Nate Robinson begins the season as the starting PG, but naturally, we’ve got the steady veteran Jarret Jack waiting to take his minutes, much to the dismay of the fans.

Jamal Crawford will have the greenest of green lights as a scorer and will also run spread pick and roll with David Lee, surrounded by the shooting of Courtney Lee and Danilo Gallinari. The spacing should enable Nate to cook, especially without his biggest hater, Mike D’antoni, to rain on his parade. Round out the 10-man rotation with Langston Galloway and Mindaugas Kuzminskas and you have yourself a squad. DJ & the Straight Shot is cooking with gas.

Isiah Thomas did many things wrong in his Knicks tenure, but I am here to rewrite history. Nobody can say Isiah was unwilling to go after talent or pay for his players. We have some big personalities and some big contracts on the ITAS but we have talent in spades to make up for that. This team is built by its big men, taking inspiration from the Grit and Grind Grizzlies with Zach Randolph getting a better role and chance than he did in NY. The Z-Bo/Eddy Curry front court is built to push people around and is surrounded by shooting with Wilson Chandler and Quentin Richardson. There are buckets all around with Stevie “Franchise” Francis, Larry Hughes, and Brandon Jennings. The veteran leadership comes off the bench with Jalen Rose, along with perfect personality compliments to the grinding this front court is going to do off the bench with Antonio McDyess and Bobby Portis. This team takes the best of a bad era of Knicks basketball but revitalizes it with better on-court fits and a coach that can get the most out of this team and bring back grittiness from the ’90s.

Get your track spikes ready! This team is ready to run all night. Spearheaded by the speedy and high-flying penetrator Dennis Smith Jr., we’ll look to thrive in transition and go four-out, one-in offensively, hammering pick and rolls with Timofey Mozgov and sprinkling in some pick and pop with Marcus Morris spacing the floor. Mook and Al Harrington will both be able to get us a bucket whenever necessary and Cam spaces the floor and provides very solid defense. Our bench unit will be Allonzo Trier in attack mode and some Aaron Afflalo isolations with Damyean Dotson thriving on spot-ups. Willy Hernangomez is a threat on the block and Anthony Randolph is a utility guy who is rangy and can cover a lot of ground defensively. The Garden Guardians will epitomize Run-N-Gun.

Buckets are one thing this team will not struggle with at all. There are a few names on this team that didn’t have the longest tenure with the Knicks and some who most fans would certainly like to forget ever existed, but in order to succeed in the game, you have to take risks. With Kristaps Porzingis leading the helm (yes, I know he’s not a fan favorite) we give our team solid rim protection with a great ability to stretch the floor and be a mismatch nightmare. With Michael Beasley (your favorite player’s favorite player) as his co-star, teams are going to have a hard time deciding who to focus their defense on. Quentin Grimes provides the team with young excitement and an incredible two-way upside that I’m sure will play to the team’s benefit. When we look over at the bench, we find more buckets with Tim Hardaway Jr. leading the way along with Kemba Walker. Despite his injuries, Kemba Walker will occasionally be able to light up the box score for 40 points. With Wesley Matthews, Noah Vonleh, and Channing Frye, defense and rebounds are things we won’t need to worry about. This team may look like a head-scratcher, but at the end of the day, the name of the game is to put points on the board. We are the Walking Buckets!

All five GM’s have assembled their teams, now it’s up to you readers to determine who will be the King of the No-Playoffs Knicks. Take to Twitter to vote in our bracket and find out who will come out victorious!