Kenny Atkinson and David Fizdale: How to Measure Success in the First Year of a Rebuild? 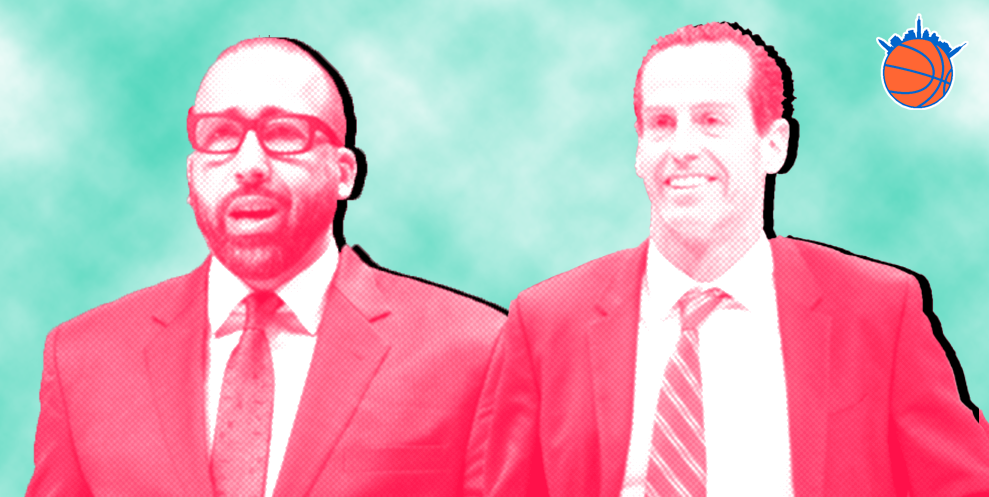 How do Fizdale and his staff cultivate and nurture development while simultaneously losing a stack of games? Perhaps the Knicks coach can learn from Brooklyn’s Kenny Atkinson.

For a league that prides itself on being a non-stop 12-month show, August is the closest the NBA gets to a month off. It’s the heart of the non-basketball basketball season: a depressing, existentially fraught no-mans-land between Summer League in July and training camp in September. These are the real dog days of the NBA calendar, where fans find themselves staring listlessly out of windows, brows furrowed, desperately channeling all available psychic energy towards Kristaps Porzingis’ lower appendages.

For front offices around the NBA, August is when you sit back and safely admire the roster you’ve constructed, beautifully insulated by the fact that actual basketball is still two months away. For now, rosters are purely theoretical, existing only on paper. For Steve Mills and Scott Perry, the New York Knicks’ front office, and for Knicks fans, this offseason’s acquisitions look exciting—on paper.

As you may have heard, the Knicks now have nine former top-10 draft picks on their roster. Perry and Mills have cornered the market on untapped—and mostly unwanted—recent lottery picks, adding Mario Hezonja and Noah Vonleh this summer to last year’s project pickups of Trey Burke and Emmanuel Mudiay. The Knicks brain trust has committed to repeatedly throwing so-far failed NBA prospects against the walls of MSG, hoping something, or somebody, sticks.

Much of the front office’s faith in this approach to rebuilding equates to faith in new head coach David Fizdale. The charismatic young coach is the developmental glue that, in theory, will help some of these kids catch on in the NBA.

It is difficult at this stage to measure the Fizdale effect beyond acknowledging that he is a nice and personable man. He leads the league this summer in charmingly reassuring smiles and enthusiastic soundbites—which is encouraging, I suppose. This summer, Fizdale has contributed to a general sense of niceness around the Knicks—a pleasant soundtrack to a fluffy, rebuilding daydream of innocent hope and best-case scenarios.

For Knicks fans, there is a tentative sense of giddiness around the organization. It’s not so much that there is light at the end of the tunnel, but rather the knowledge that we are, in fact, in a tunnel, as opposed to being trapped in some kind of NBA purgatory, with Phil Jackson incessantly playing the triangle while repeating esoteric chants that Charley Rosen translates into abusive headlines, all while Derrick Rose bobs around mumbling about super teams.

Sorry about the visual, but the point remains: normality is novel for the Knicks.

It will be fascinating to watch the Knicks navigate a rebuilding season with a new head coach, one in which they are expected to be one of the worst teams in the league. How do Fizdale and his staff cultivate and nurture development while simultaneously losing a stack of games? And what barometers do we use to measure the level of success Fizdale and the Knicks achieve?

Many Knicks fans—and Nets fans for that matter—will grumble and chafe at any cross-city organizational comparison. Despite both franchises relative recent ineptitude, there is no love lost between the two, as Enes Kanter and Spencer Dinwiddie just demonstrated with a perfectly mid-August Twitter skirmish arguing for the depressing title of the best worst team in New York.

Dreary and disillusioned digital chest-thumping aside, the reality is that both franchises are staring down the barrel of a rebuild. Kenny Atkinson—who, like Fizdale, is known as a developmental coach—has done a masterful job in his two seasons in charge, forging an on-court identity amidst a turnstile roster and a crippling talent deficit.

In 2015–16, the Nets won 21 games under a combination of Lionel Hollins and interim coach Tony Brown. That season, they were 27th in three-pointers attempted per game and 21st in pace. In 2016–17, Atkinson’s first year as head coach in the NBA, the Nets actually won one less game (finishing 20–62), but finished fourth in three-point attempts and first in pace.

Rebuilding with a weak roster didn’t stop Atkinson from implementing a modern, pace-and-space system from his very first game as an NBA head coach.

Perhaps the most impressive turnaround in Brooklyn has been on the defensive end, where the Nets have gone from 25th in attempted opponent three-pointers per game in 2015–16 to first last season under Atkinson. The blueprint isn’t rocket science; shoot the three, defend the three, get lots of possessions. It’s working, too. Last year the Nets won 28 games and lost 15 by five points or fewer–which, given the roster, is pretty impressive.

Beyond wins and losses, statistics like these will be a measure of improvement under Fizdale’s stewardship. The Knicks, perhaps moreso than any other NBA team, have been slow to embrace the pace-and-space style that has engulfed the rest of the league. Under Jeff Hornacek last season, the Knicks were 29th in attempted threes and 15th in pace. One would imagine a decent spike in both of those league ranks next season with Fiz manning the sidelines.

These identity stats, indicative of a coach’s offensive and defensive gameplan, are crucial to effective player development. It is demonstrably easier for a player to hone in on a task, assignment, or skill if that player knows how his performance of that skill fits with and contributes to the team’s system as a whole.

Fizdale has made no secret of his intentions to modernize the Knicks playing style, and the front office has reacted accordingly, rounding out the roster with athleticism and shooting. Wins and losses aside—and there will be plenty of the latter—Fizdale and his kids are set to run and gun their way to a Nets-esque turnaround in the pace-and-space league ranks.

This will be a welcomed change from the last few years of prehistoric basketball under Phil Jackson and his antique Triangle Offense, halfheartedly orchestrated by coaches and players who had the system rammed down their throats. This backdrop is what makes Fizdale, and the future he’s laying the foundation for, so exciting.

The Knicks find themselves heading into the 2018–19 season in that comfortable sporting sweet spot of having plenty of down-the-road hope, but pleasantly little in terms of tangible wins and losses expectations in the present. So how do we measure a successful season—that is, a season of successful development?

Fizdale’s ability to quickly implement his brand of modern basketball will be a starting point. Just down the road, Atkinson has set the standard with a quick and effective rebrand of his own.

One thing is for sure—in the first Knicks-Nets showdown of the season on October 19th, both teams will be, in the smooth, sultry and scintillating parlance of our own Walt “Clyde” Frazier—running and gunning.