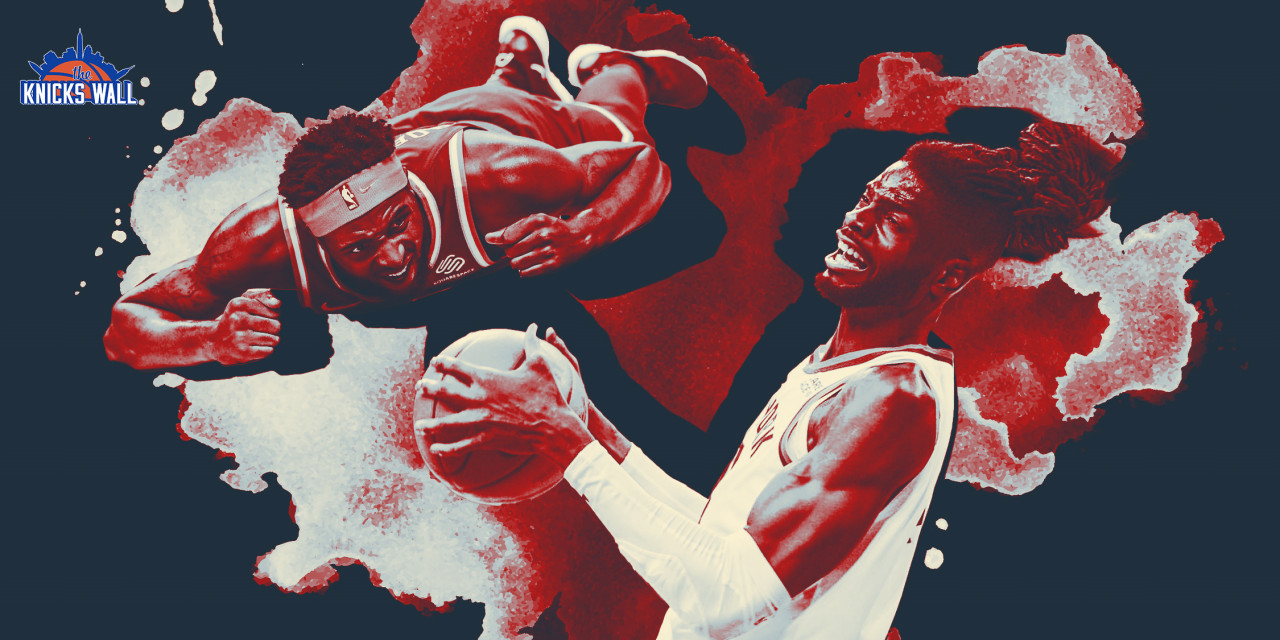 With Nerlens Noel hurt and Mitchell Robinson not totally himself, the Knicks’ big-man rotation hasn’t exactly been anchoring the defense.

It doesn’t take much to paint an ugly picture from all the headlines describing the New York Knicks’ iffy start to the season. Those headlines, from one week ago, were meant to capture a mere piece of what felt wrong about the Knicks. Now, they feel like they represent ongoing trends. Things that need “figuring out,” need to “get this right,” “adjustments.” Yuck. No, thank you. These aren’t trends that can persist. And yet, have they ever.

Things are ever-so-slightly unwell in the Big Apple. Not yet totally discouraging—or worse, the far-too-familiar depressing. I mean, heck, this is an 8-7 team. Last season—you might recall that they nearly burned New York City to the ground with the excitement they caused via nabbing the Eastern Conference’s fourth seed—they started 7-8 through 15 games. Before that fondly remembered nine-game win streak in April 2021, there were five- and three-game losing streaks in January.

So, lest we forget, things take a minute to get rolling in the right direction. You might blame the impact of three NBA seasons completing or at least beginning within one calendar year; I, for one, blame the balls.

But in all seriousness, there are reasons to fret. None of which are unfixable problems, but not ones that can be ignored, either. The team’s defensive woes are dreadfully remarkable considering their dominance a season ago. That they’re crushing it on the offensive end helps to ease the mind a tad, but not without contemplation about how well things might be going if the defense could match. In losses this season, the Knicks have only allowed fewer than 110 points twice. Needless to say, they could use all the defensive help they can get.

What an inopportune time to have big-man issues… again.

Now, it’s unclear how long Nerlens Noel will remain sidelined with a litany of lingering issues—a sore knee, a tweaked hamstring, and a sore back have all been nagging issues, though the knee is what has him missing time, most recently being absent from the team’s home loss to the Orlando Magic.

With Noel’s uncertain status, the Knicks are down a much-needed rim protector, in their time of need no less. Yet this season, Noel hasn’t been the force on the defensive end we’re used to seeing. His defensive box plus/minus sits at 1.3; that’s a career-low. The same goes for defensive win shares (0.2), and while his 1.3 blocks per game are far better than the league average, they’re middle-of-the-road numbers for Noel.

All in all, though, his numbers are bound to be impacted by the lackluster defensive performances turned in by the entire team. Sure, he can be better, but so can every player, one-through-15. The primary problem with Noel is that he’s only played in four games. The conversation surrounding last season’s MVP award, if you’ll recall, was all about one’s availability being the best ability. While he was certainly the best player in the league last season, there’s no doubt that Nikola Jokic’s win had something to do with the fact that he played all 72 games. Noel’s not winning any MVP awards any time soon, but he certainly has value to the Knicks. Even if he’s healthy, they’re arguably shorthanded at the 5. His presence, in actuality, is probably more invaluable than it is valuable, especially given his particular skill set. (Not to mention his price point. Whoops, I mentioned it.)

Mitchell Robinson’s defensive impact is even more evident than Noel’s and much more well-documented. Against the Bucks last week, he spent 46.6% of his time on defense guarding Giannis Antetokounmpo, per NBA.com’s matchup stats. He kept the two-time MVP to 1-for-6 shooting; that Giannis had an off night overall was likely an aid in that fight, but still. The fact with Robinson, though, is that his dominance can only be felt if he stays on the court. He hasn’t been able to in years, and even with the clear-cut potential he has to achieve his own goal of winning Defensive Player of the Year, he’ll never reach that mountaintop without a stretch of luck on the injury front. Both fatigue and a hip flexor have kept him out of a game this season. It’s only a game, for now, but when it becomes two, or five, or 12 is when you start wading into murkier waters.

What can the Knicks do about these persistent uncertainties? Their options aren’t wide-ranging. For one, they can continue to provide opportunities for rookie center Jericho Sims to prove whether he’s capable or not of taking on a bigger role, but so far, he’s failed when called upon. Trusting Taj Gibson with starter’s minutes is one option, but I hesitate to shrug off the concerns there for obvious reasons. Gibson is 36, plus he’s dealt with a naggy ankle sprain this season.

My god… do I need to break out the trade machine already?!

I won’t go nuts. I’ll just offer some options, those that may be able to right the ship on the defensive end, as well as to add some depth to New York’s frontcourt. Perhaps Dallas’ Dwight Powell could be worth exploring. Maybe it’s worth taking a flier on a youngster like Phoenix’s Jalen Smith. I think they could do much, much worse than Mo Bamba. And I don’t think it’d be crazy for Scott Perry to give Bob Myers a call to see if he might be willing to shop James Wiseman.

But remember: these are all rendered pointless if Knicks big-man core can ever (and I mean ever) stay healthy. Robinson and Noel are an elite-level paint duo, or at least they have the potential to be. And the Knicks, as we’ve seen, have the potential to be an elite defensive team. They were there a few months ago. How soon they can get back to being that team—and their bigs to those players—might be a bellwether for how far New York is capable of going.