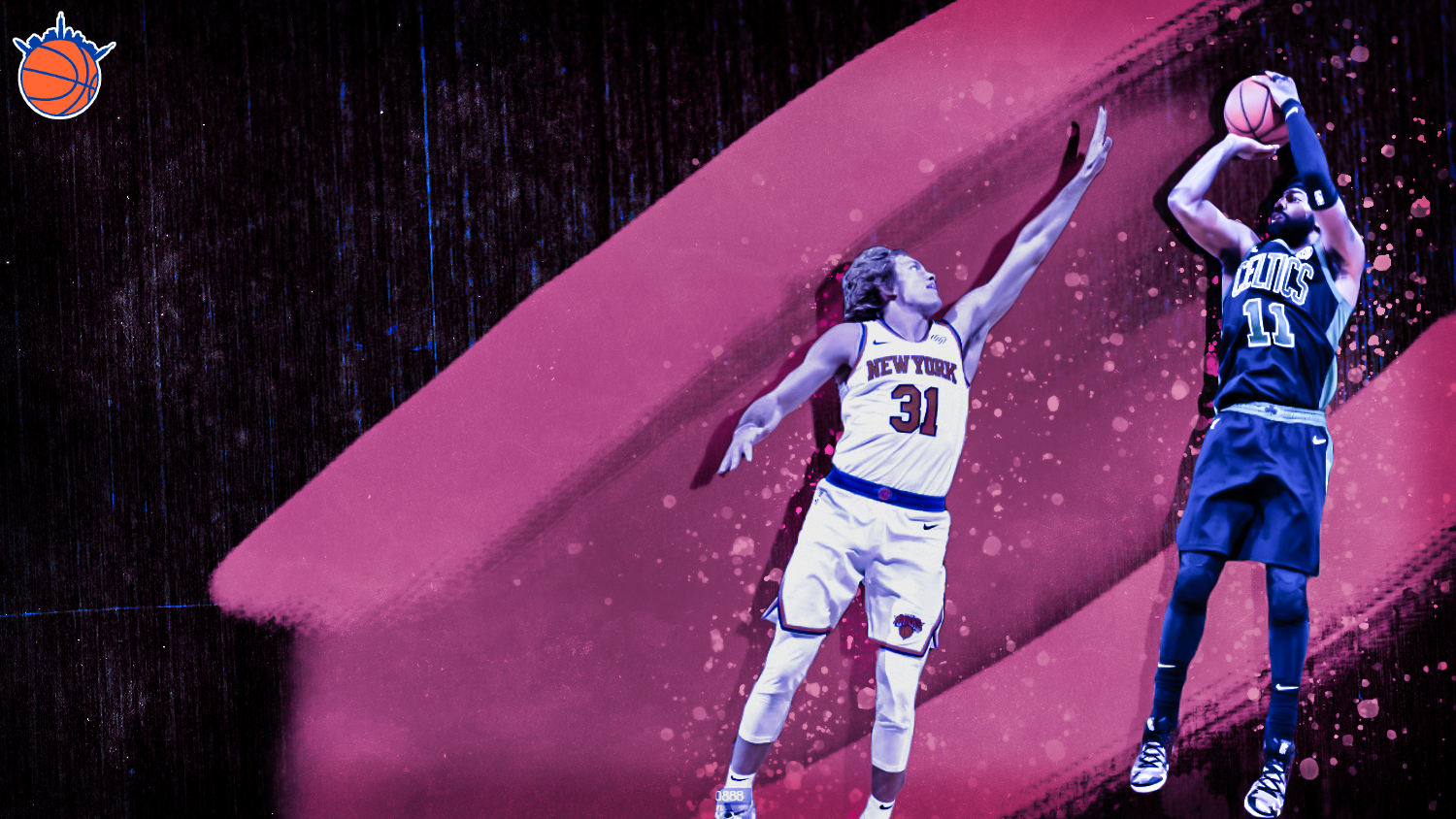 The Knicks are playing heads-up defense through five games, relying on causing havoc and flipping opponents’ turnovers into scoring opportunities. It also goes against the grain of many NBA teams.

Five games into the 2018–19 NBA season, let’s dive into some potential big-picture implications of the New York Knicks’ new defense. Head coach David Fizdale has thrown caution to the wind so far with his ultra-aggressive scheme. It’s a defense that prioritizes disruption and forcing turnovers at the expense of surrendering analytically efficient shots, which more conservative schemes try to take away. Most teams in the NBA defend conservatively, so what’s the philosophy and thinking behind Fizdale’s decision?

Two statistics, in particular, are telling when placing a team’s defensive strategy on the spectrum between conservative and aggressive; defensive turnover percentage and opponents corner three-pointer frequency. Last season, the Oklahoma City Thunder defense led the league in turnover percentage, forcing opponents to cough it up on 16.5 percent of their possessions. OKC also gave up more corner threes than anyone else in the league, with 8.8 percent of opponents possessions ending in the most prized shot in basketball. In contrast, the Brooklyn Nets defense forced the fewest turnovers (12.4 percent) but also allowed the fewest corner threes (5.2 percent). The Portland Trail Blazers forced the second-fewest turnovers (13.1 percent), and allowed the second-fewest corner threes (5.6 percent).

Last year’s aggressive Thunder and conservative Nets schemes represent the extremes of a stylistic decision every NBA defense must make. What is the value of aggressively forcing turnovers—getting into passing lanes, disrupting the pick-and-roll, gambling for steals—when weighed against the cost of such aggression—a higher likelihood of the offense breaking down the defense, getting into the paint, and finding open corner shooters? So far this season, Fizdale and the Knicks have opted for the benefits of aggression, sitting fourth in turnover percentage (17.4 percent) while giving up the fifth most corner threes (8.8 percent).

Frankie's DEFENSE leads to the 3-ball from Hardaway.

This isn’t surprising, given Fizdale’s history as an assistant coach with the Miami Heat from 2008–16. In five of his eight seasons as a Heat assistant, Miami’s defense had a top-five turnover percentage. Two of these top-five finishes were before LeBron James joined the Heat, so an aggressive defensive philosophy is one Fiz was exposed to, and saw succeed, even before those famously devastating LeBron-led Miami defenses trapped and suffocated opponents to death on the way to two NBA titles. In his lone full season as the head coach of the Memphis Grizzlies in 2016–17, his defense was eighth in turnover percentage.

While Fizdale has an appetite for forcing turnovers in his coaching DNA, it’s interesting that he’s implemented such an aggressive scheme from the outset with a Knicks roster with a few sizable defensive question marks. One of the reasons ultra-aggressive schemes are rare across the league is that they’re simply really hard to do! Success is dependent on having the right players—long, athletic, active—and getting those players to execute consistently.

The combination of both athletic ability and adequate execution is rare (ask Jason Kidd and his former Milwaukee Bucks). Screw up even occasionally and you’ll get burned so severely that gains are swiftly erased. And the small margin of error only gets smaller the better the competition gets, in the playoffs, when it matters most.

With Enes Kanter, Trey Burke, and Tim Hardaway Jr. in the starting lineup, the Knicks have three minus defenders on the floor. So far, with the help of Frank Ntilikina and Lance Thomas, this trio has survived surprisingly well defensively. Given the limitations of all three—Kanter and his nonexistent rim protection in particular (Knicks are allowing opponents to shoot a whopping 65 percent at the rim)—it will be interesting to see how the defense holds up beyond this pleasantly (small sample sizes notwithstanding) solid start.

There’s a school of thought that an effective conservative defense constructed around this defensively challenged starting trio will be equally hard to build. Or equally flawed. So why not play aggressively, the way Fizdale wants to beyond this season, and benefit from the turnovers you do get, and the easy offense they fuel in transition.

Maybe the downside of this strategy, this season, with this roster, is not the point. The interesting point is that Fizdale has planted his defensive flag in the ground. The enduring feature of this early season declaration of defensive identity—aggressively hunting turnovers—will be the mentality of the scheme itself, rather than the success or failure of this particular stopgap group of Knick players executing it, however plucky their play. Future Knicks rosters, as long as Fizdale is around, can reasonably be assumed to be constructed with this scheme in mind.

Picture this: Mitchell Robinson, Kristaps Porzingis, Kevin Knox, Frank Ntilikina and (looks to the heavens and silently cashes in all karmic equity) Kevin Durant set up for a defensive possession. Five Knick predators wait patiently, 10 cartoon arms outstretched in a tangled lattice of length, primed for 24 seconds of defensive assault. A gauntlet of go-go gadget seven-footers infused with the frenzy of a thousand Fizdale fist pumps, ready to squeeze, strangle, and snatch the possession from that night’s unfortunate collection of victims.

It could be devastatingly beautiful. It will be Fizdale’s defensive happy place this year. He’ll be going there a lot.

So far, on the court this season, the scheme hasn’t quite been as dramatic as that last daydream of a paragraph (I got carried away, apologies). But the aggression is still tangible. It means ball pressure, sometimes full-court. It means playing the passing lanes (the Knicks are eighth in steals per game, with just over eight swipes a contest, through five games). It means extra rotations, resulting in bad rebounding position (New York was destroyed on the defensive glass against Brooklyn and Milwaukee).

To an extent, though, it’s working, the Knicks have a close to top-10 Defensive Rating, sitting 12th, giving up 107.2 points per 100 possessions. At the very least it generates easy offense and guarantees a level of individual effort on defense. It’s hard to slack off—and not get your ear chewed by coach—when you’re one-fifth of a perpetual pinball rotation. Nonetheless, there will be a regression on the horizon here. And that’s O.K. This is a development year, for developing an ability to internalize crushing defeats in the name of big-picture moral—and maybe strategical—victories.

While most of the NBA has gravitated toward an easier to implement and execute conservative scheme in recent years, it’s intriguing that Fizdale would so emphatically double down on the style in which he knows. There is a homogenization of shot profiles around the league, as teams rely on and seek out threes at a higher and higher rate. How does this trend—which shows no sign of slowing down—impact the effectiveness of aggressive defenses? It just raises the stakes; higher risks, greater rewards.

One bright spot in this blowout has been Dotson, again, for the third game in a row.

Getting good shots—like corner threes—is inherently risky. Daryl Morey’s Houston Rockets have finished dead last in mid-range shots each of the last six seasons, they’ve also finished 30th, 29th, 28th twice, 21st and 10th (last season, impressively) in turnover percentage. The inverse is true of the Knicks offense this year, where they take a lot of mid-rangers (fourth in mid-range shot frequency at 38 percent) and rarely turn the ball over (fifth in offensive turnover percentage at 11.2 percent).

What will be fascinating, as Fizdale gets a roster more suited to his style, and the league continues to emphatically trend towards Morey-ball shot profiles, is whether there is a risk/reward tipping point. When does prioritizing threes become something that a defense and roster designed to engineer and capitalize on turnovers can exploit?

It’s possible an ultra-aggressive defense, full of athletic near seven-footers, will be uniquely positioned to leverage this tipping point in their favor. It’s also possible that the league becomes so good at sourcing these analytically friendly long-balls that such aggression is stylistic suicide.

Either way, we probably won’t find out this season, with this roster. But the Knicks will be all the more exciting to watch playing this aggressive style whoever is on the floor for Fizdale. It’s a fascinating—and contrarian—strategical gambit from a head coach who clearly has high hopes for his high-risk, high-reward scheme.