Fizdale Names Starting Lineup, Will Feature Both Burke and Ntilikina 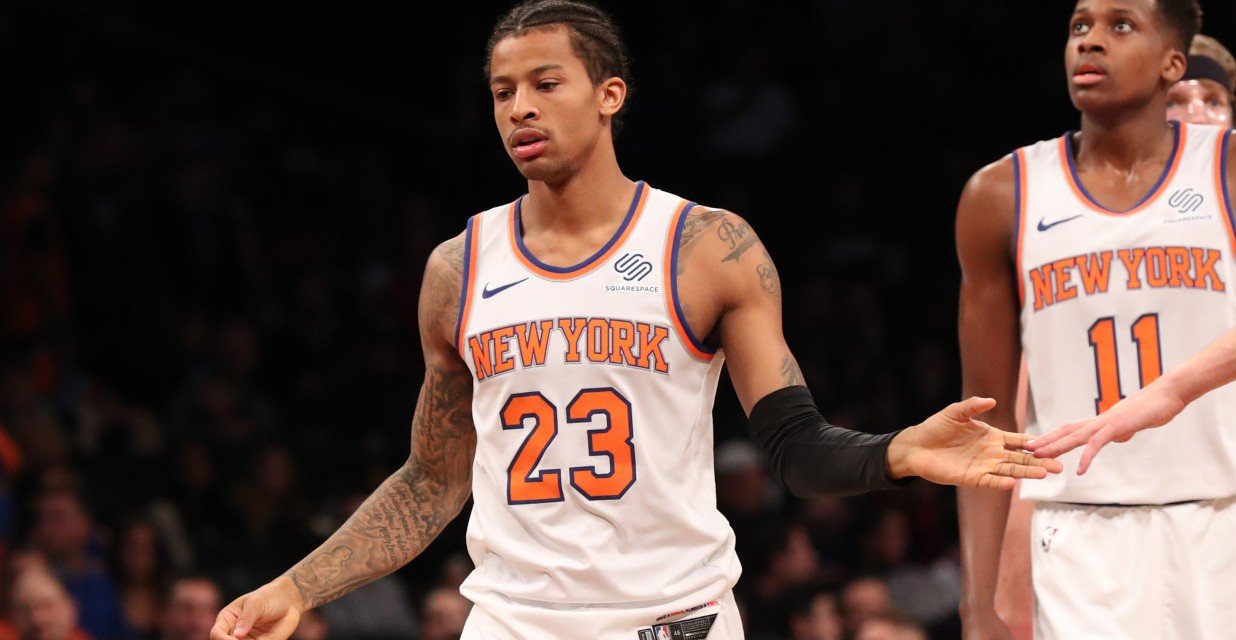 In a surprising twist, Frank Ntilikina will start from day one for the Knicks—but at the wing, not at point guard. Trey Burke will start, too, and rookie Kevin Knox will come off the bench.

New York head coach David Fizdale decided to kick off the season with a Clayton Kershaw-esque curveball. Throughout training camp, Fizdale was adamant that no starting spots were guaranteed. He remained true to his word during the preseason, with four different starting lineups across five games. There was little doubt Enes Kanter and Tim Hardaway Jr. would start—we know what we’re getting from both. The final three spots were up for grabs, and the last preseason game may have been the deciding factor.

The shocking upset in the frontcourt was Kevin Knox being bumped. Did Fizdale choose Frank Ntilikina starting over Knox, or Trey Burke? After the final preseason game it became clear that Ntilikina’s defense and progress on offense should be enough to start. Fizdale concurred.

Where Fizdale faked us out was keeping Burke in the lineup.

More on the backcourt in a second. Let’s tackle the the Knox exclusion. Before you get up in arms, take a deep breath. This is not as big a deal as you think it is. Closing lineups mean infinitely more than who starts. Until Knox is held out of crucial late game moments, my hand will be nowhere near a panic button. Still, let’s try and see what Fizdale saw.

Knox did not finish the preseason strong—three points on 1-of-6 shooting and five fouls in the finale–but he was not awful to the point of any consequence. Fizdale is going to play him a lot of minutes this season, as his five preseason starts showed us. The only part that made this decision a bit of a surprise was the coach’s previous views on Tim Hardaway Jr. at the 3. Upon his hiring, Fizdale remarked that he viewed Hardaway more as a traditional shooting guard versus a small-ball 3.

My leading theory is that Fizdale sees Knox splitting time at the 3 and 4. Knox feels more comfortable at the 3, but his size may benefit the team more at the 4. (Stop me when you heard this before). Fizdale warned Knox would have to take his lumps as a rookie. That looks to be true, as he may be asked to bang with some of the bigger guys on the floor.

Maybe this is all a test. Knox has shown his maturity thus far. Will a “demotion” to the bench as the sixth man poorly affect his play? From what we have seen, I don’t think so. Knox will be the focus of the second unit, and most importantly, remain a weapon to close games.

This lineup tweak could be a reflection on Fizdale’s closing lineup. Knox has the ability to play four positions if needed. That gives Fizdale the flexibility to go small and slide Knox into that small-ball 4 role. Or he can go big, with Knox at the three, Burke coming off the bench, and Timmy bumping down to the backcourt with Frank.

Speaking of the backcourt: FRANKIE.

Frank is just such an intelligent basketball player. Contests the corner three, stifled the drive, forces a turnover and draws the foul. pic.twitter.com/a4D5RTcob0

If there was one thing a majority of us wanted, it was for our young Bastille to start. Fizdale granted us that wish. But does the inclusion of Burke speak more to Frank as an off-ball guard? I don’t necessarily think so. Coach Fizdale likes to have multiple ball handlers on the floor. Whenever Frank was on the floor, so was some variation of Burke, Ron Baker, Emmanuel Mudiay, or Allonzo Trier. This could be a simple case of Fizdale wanting two initiators on the floor together.

Trey may shoot too many mid-range jumpers for my taste, but he does some key things you need a point guard to do, which Frank is still learning to master; chiefly, the ability to keep a dribble. Trey’s ability to slither through the trees down low and fit passes into the tiniest of creases compliments the catch-and-shoot prowess of Hardaway Jr. and Frank.

Frank has yet to fully master shooting off the dribble, especially from deep. He looks most comfortable when the ball is kicked out to him. In that case, Burke is an ideal backcourt partner. Frank will still have the freedom to attack the rim (something he started to do with more confidence to close the preseason), putting that muscle and God-given reach to use.

So, to put a bow on it, what can we expect from this starting unit? It does have a defensive-minded feel to it. This could limit the fast starts teams tended to get on the Knicks in the past, in both the first and second halves. Burke mentioned slow starts coming out of halftime were a big problem last year. With a veteran-laden lineup, the urgency and effort to hit the ground running will be there.

Tomorrow night we get to see this group in action. Remember to keep an eye on the bigger picture (minutes played in higher-leverage situations) instead of focusing on labels.