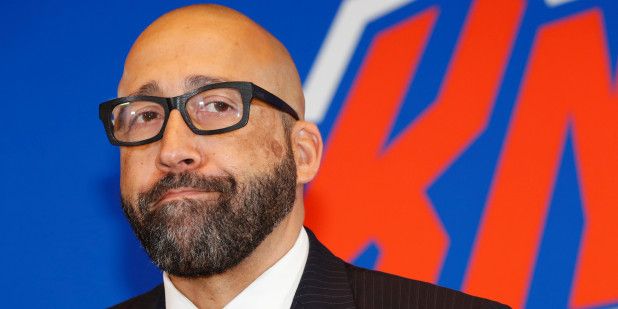 David Fizdale is sticking to his starters as he praises defensive energy from his young Knicks group.

On Sunday, before the Knicks’ matchup with the Orlando Magic, head coach David Fizdale praised his units’ defense.

“Overall, I like…[our] defensive efficiency,” Fizdale remarked. “I like our athleticism with that group.”

The Knicks trotted out a lineup of Trey Burke, Tim Hardaway Jr., Frank Ntilikina, Lance Thomas, and Enes Kanter to start the season. After the fifth game, Fizdale made the decision to take out the offensive-minded Burke and Kanter and insert rookie Mitchell Robinson and reclamation project Noah Vonleh—with Ntilikina running the point, the position wherein he was drafted.

Now, at the dawn of the team’s 14th game, Fizdale has stayed with the trending opposite lineup—the two-big frontcourt of the 6-10 Vonleh and seven-foot Robinson provides length in a league moving towards stretch 4s and even stretch 5s. While Vonleh—who shot 48.5 percent in college—has been given the green light to shoot from deep as a professional, and is averaging a career-high 1.2 three-point attempts per game, he’s often passed up open looks and relied on his strong body to screen for his teammates.

Fizdale’s praiseworthy starting unit also includes second-year player Damyean Dotson, the versatile forward-guard at 6-6 who frequently matches up with opponents’ best perimeter players while shooting 44.3 percent from the field and 33.3 percent from deep. Dotson has essentially taken over for Courtney Lee, New York’s injured 3-and-D specialist who has missed extended time due to a neck sprain—he hasn’t seen NBA action yet.

Lee converted on 40.6 percent of his three-balls last season, and the Knicks are significantly feeling his absence. The team is 21st in the Association in three-point attempts, per NBA Stats, and the same league ranking in Defensive Rating. Dotson, the second-eldest starter after Hardaway at 24 years old, has tough assignments like guarding Toronto’s Kawhi Leonard on Saturday, while still providing the efficient, double-digit scoring expected of him as a high-ceiling role player on the Knicks. Fortunately for Dotson, he kept the all-star Leonard to 12 points on a measly 2-of-7 from the field—demonstrating his value to the franchise even in a loss.

For Mitchell Robinson, though, offense is making its way towards comfort. “I just look to get open,” Robinson blankly answered before Sunday’s tilt against Orlando.

The 36th-overall selection from the 2018 draft is making his ninth start versus the Magic, who feature the post-heavy center Nikola Vucevic. While Robinson has become the beneficiary of highlight plays due to help defense and broken-down screen coverage leading to swats, the new task of defending the savvy veteran Vucevic serves as a new challenge for the developing big man. Mitchell could be the bedrock of a developing Knicks defense, an intimidating presence in the paint à la Rudy Gobert—along with an unintimidated defender switchy on pick-and-rolls. Robinson’s length, like the athleticism Coach Fizdale earlier praised for his starters, can be a disruptive feature—not a bug—of a Knicks team desperately searching for an identity that turns the franchise around.

New York’s starters have a mean age of 22.6. Even Mitchell Robinson, who’s figuring out how to unlock his potential, only visited Canada for his first time on Saturday. “That’s somewhere I’ve always wanted to go,” Robinson acknowledged.