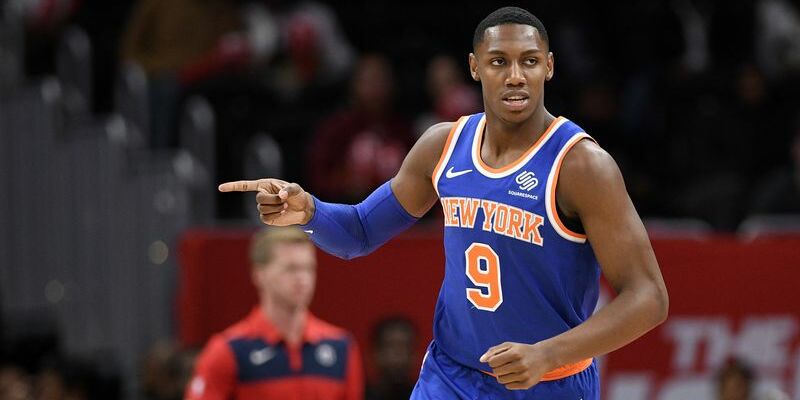 Second-year New York Knicks head coach David Fizdale has played coy since the end of the NBA’s preseason last week, telling reporters he was still thinking about the team’s starting lineup for the first game of the regular season.

Fizdale is throwing out the rookie R.J. Barrett at lead guard with second-year shooting guard Allonzo Trier joining him in the backcourt. Trier did not start for the Knicks once in the four-game preseason while Barrett, New York’s third overall selection from the 2019 NBA Draft last June, started in every game. The Knicks coach praised Barrett’s distributive and playmaking prowess while speaking to the media in the lead-up to Wednesday night’s season-opening bout between Fizdale’s team and Gregg Popovich’s squad.

On the Knicks’ point-guard competition between third-year guards Dennis Smith Jr. and Frank Ntilikina and free agent acquisition Elfrid Payton, Fizdale commented, “They have to earn it,” per Marc Berman of the New York Post, signaling that none of the floor generals “won” the not-so-spirited competition.

Fans were hoping to see their young guards earn the title of starting point guard—either Ntilikina, who they selected with the eighth overall pick in the 2017 draft, one spot ahead of Smith Jr., and who has yet to have a lengthy run of games with consistent minutes—or Smith, who the Knicks acquired along with multiple draft picks for Kristaps Porzingis in the middle of the 2018–19 season. It turns out neither will start tonight, however.

Ntilikina impressed folks with his splendid defense, although he couldn’t score the rock again. His lockdown defense on Trae Young against the Atlanta Hawks in preseason nearly brought the Knicks back from the brink to win the ball game. Smith, meanwhile, is an athletically gifted driver with solid court vision and speedy wheels. He looked possibly the least fresh, however, after sidelined from the first two preseason game, and the rust certainly hasn’t worn off yet.

Payton, 25, was a lottery pick of the Orlando Magic while current Knicks general manager Scott Perry worked in the Florida franchise as an assistant GM. Many believed he was “promised” the starting role when he signed a two-year deal with the ‘Bockers in the offseason as a free agent.

Meanwhile, Barrett played a league-high 37.4 minutes per game in preseason, with his head coach mentioning the young athlete can take the heavy workload. The Duke standout averaged 15.8 points, 6.8 rebounds, and 3.3 assists per game in preseason and started at shooting guard and small forward for the Knicks—although he played scattered minutes at lead guard.

The Knicks tip-off with the Spurs at 8:30 p.m. EST tonight, and it’s worth mentioning who started for the down-on-their-luck franchise this time last year:

That’s right, Fizdale deployed Frank Ntilikina at small forward for the team’s season-opening matchup with the Hawks in the regular season last year (they won the game, actually), along with the soon-to-be free agent Trey Burke at the point. This time around, though, Fizdale is putting the ball in the 19-year-old Barrett’s hands and giving him every opportunity to create for the team alongside a lineup of veterans and a second-year guard known for his isolation behavior on offense.